A Melbourne eatery has told customers it’s entering a “brave new digital world” by going cash-free from this week, after a series of “disastrous” robberies earlier this year forced it to act.

Pope Joan in East Brunswick jokingly told punters via social media on Tuesday the only methods of payment now available to customers are “card, pet or first born child: your choice”.

However, while many SMEs are focused on adopting new options for streamlining payments, Pope Joan’s decision was not made for technological reasons.

Instead, the move comes after three break-ins at the business over the past 18 months, which operations and events manager Morgan Brady tells SmartCompany were devastating for the small business.

“Our first break in was just after Mothers’ Day, with a busy day and busy night,” she says. 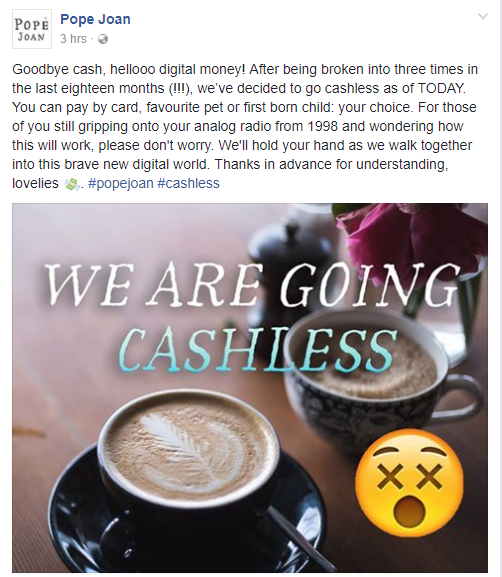 The thieves targeted the cash held in business’ safe, but the local community rallied around the venue, with other suppliers and producers telling customers to go show Pope Joan some love in the days that followed.

“We’re a small business so it really affected us but it was also incredible how much support we got from the local community. So many of our supporters and customers posted on social media urging their friends and followers to pop in,” Brady says.

Pope Joan’s management, led by owner and chef Matt Wilkinson, sat down afterwards and crunched the numbers, discovering that around one fifth of the venue’s daily takings were in the form of cash.

Calculating the expense and energy that managing this money was taking, the business decided to ditch cash altogether.

The move has largely been welcomed by customers, Brady says, acknowledging that in today’s climate, it’s cash-only businesses that are the real pain point for people.

From here, it’s all about reviewing how people handle the change, with Brady planning on sitting up the front of the venue to watch customer’s reactions to the new setup.

The business says it appreciates that anyone who comes through its doors is electing to spend their time and money with Pope Joan, and Brady advises other businesses that may be considering similar big changes to their operations think of these as community-first.

“I think being a small business, you really get to know who your customer is; it is not lost on us that they make a choice every time they come to Pope Joan to support us,” Brady says.

If recent data from the Reserve Bank of Australia is anything to go by, other hospitality businesses might not be far behind Pope Joan.

A report released this month on Australia’s fourth Consumer Payments Survey, conducted every three years, shows card payments have steadily increased over the decade, from being used for 26% of all purchases in 2007 to 52% of all payments in 2016.

The reliance on card payments for small items has also rocketed over the past 10 years, suggesting punters are more willing to pay for small items like coffees without drawing on spare change. In 2007, only 4% of purchases under $4.00 were paid for by card, compared with 32% today.

The Tax Office will be happy