Both meat lovers and vegetarians alike have spent the past two days hitting Adelaide pizza shop Etica with criticism over the decision to hang a taxidermied cow from the ceiling of one of its venues.

But restaurant owners Federico and Melissa Pisanelli have taken to social media to defend the installation, explaining the cow’s primary purpose is to highlight the realities of the dairy industry.

Federico Pisanelli tells SmartCompany the installation was two years in the making, and came about after significant thought about what the business wanted to aim for if it expanded to a second venue.

“When deciding to expand Etica, we took it as an opportunity to bring animal welfare to the forefront (animal welfare was the basis for opening Etica originally almost six years ago),” he says.

“The idea of the installation is to convey important messages and the aim is to create awareness and discussion. It aims to draw a connection to the true consequence of consuming dairy.” 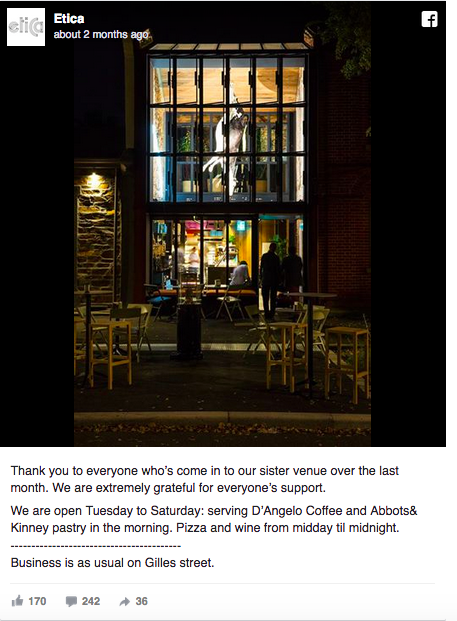 However, the move has generated concern from vegetarian and vegan diners who have suggested a better approach would be to not consume or serve meat at all in the establishment.

“You’re apparently all for the ethical treatment of animals, yet you slaughter a cow at 8 years old to eat and then hang from your ceiling,” said one poster on Facebook.

Other comment writers went as far as to call the managers “deranged psychopaths”.

“This means that we work hard to select produce sourced from farms with the highest welfare standards. We never compromise on this.”

“The purpose is to make consumers stop and think about the realities of the dairy industry. The project highlights information that is not readily available to consumers. More broadly, it is a challenge to the way in which our society tends to obscure from the origins of food.” 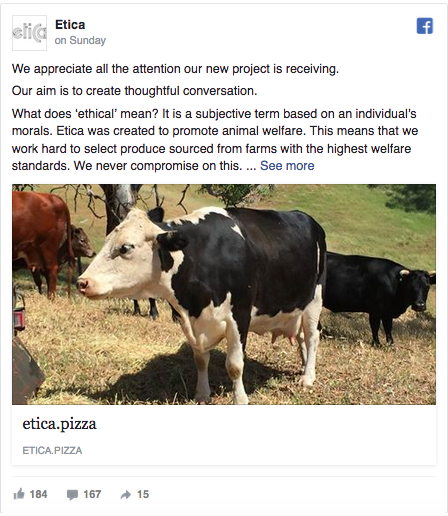 Despite the criticism, the business says it has been engaging with a variety of useful conversations about the consumption of animals, highlighting that “we are all at different stages of our moral journey”.

Etica has also outlined the origins of the cow, Schvitzy, who was slaughtered “at home” and then consumed before her body underwent taxidermy with the goal of hanging her in the restaurant.

In terms of the impact on business, Pisanella says his business has an “extremely loyal following of clientele,” and the attention has strengthened that community.

“Recent reactions seem to be targeting this project without a full understanding of its meaning. We are trying to convey the consequence of consuming the product, trying to draw a connection for the consumer, not desensitise the image,” he says.

“The installation has gained some attention, and to that extent it is successful.”

Jessica Humphreys, director of communications firm Social Concepts, says when backlash hits on social media, it can take some time before a business can tell whether it will affect their bottom line.

“It’s a really hard one to track and I think in reality, you need to look at the long term. It [sales] probably needs to be tracked over a three month period,” Humphreys says.

She observes the motivation of this campaign feeds into a “topical discussion” about food, but advises brands to think about their overall objectives before launching any ideas that could generate controversy.

“With something like this, what you really need to think about is ‘what is the objective?'” she says.

This makes it clearer to work out the value of the controversy. Humphreys cites examples of brands getting involved in campaigns for marriage equality. For many businesses, the idea of creating a safe space for same-sex attracted customers is a clear driving force for weighing in.

However, with an installation like Etica’s, she says business owners must brace themselves for the fact they will face some backlash in exchange for raising a moral issue.

Once you’ve accepted this, you can deal with any criticism with “transparency and authenticity”, and will be ready to listen to customer feedback, she says.