In a 1,000-square-metre space barely a five minute walk from their Union Street brewhouse in the inner Adelaide suburb of Stepney, the crew from Little Bang Brewing have been shoveling soil, drilling holes in concrete, and planning the next phase of life of their burgeoning South Australian craft beer business.

The new Henry Street brewery will be a much bigger Little Bang.

On the left hand side of the space, retail will reside, the taproom upgraded from nine taps to 20; the mezzanine level will act as a bookable function area, along with another at the back of the space, which will ultimately expand their visitor capacity up from its current 145-head maximum to around 290.

On the right is production, where brewer Filip Kemp has been set loose. Some of Little Bang’s current equipment will be transferred to the new space, but it is all set to be replaced, designed to spec by Brewtech, with production doubling in their first year at the new brewery, doubling again in the second year, and the new space designed to accommodate future expansion, should demand continue to increase.

The front entrance will host a beer garden, and there will be space allocated for a dedicated kids area — “parents still need to drink — a lot,” Kemp says, and packaging will also eventually be brought in-house.

Since starting in Kemp’s shed in 2013, Little Bang’s growth is best described as incremental — a process of making beer, selling beer, saving money, and buying equipment one piece at a time.

This is the largest step the brewers have made in their career, and while right now it is vast concrete, mounds of soil and little else, the vision Kemp and Ryan Davidson have for the business is a clearly laid path — more so than ever before.

“I think when we first started, five years ago in 2013, at the very, very start, we were literally trying to build a thing in Fil’s garage to see what we could get away with doing in our hobby,” Davidson recalls.

“We’ve been so incremental up ‘til now … every step of the way, the minute we have a nice idea, we either run out of beer or run out of space to put people in … It will be nice for once to be in that position of, how much do we actually want? We can dedicate that space to it.

“[And] having more capacity’s going to give us the opportunity to really go and push and see if we can find every space in the country that would take our stuff, if they only had the opportunity; whereas even now, I’ve got to be slightly selective in what we offer to other states, because we want to at least have our regular home base supporters supplied all the time.”

When the crew set up their Union Street venue, wholesale was their main aim, with the retail and cellar door offering added almost as an afterthought. Immediately it became a huge part of their business.

Having learned this lesson, Henry Street will be built with hospitality at its core, including a food offering — the direction of which is yet to be determined. Davidson says this is not only a necessity in terms of keeping guests on site, but, when considering US trends, it will be an important point of difference against the encroaching multinational faux-craft brands.

“You look at trends in the US for the way craft businesses will go over here, because they’re usually a year or two ahead of us … The big thing that’s really up is consumption of craft beer at the place it was produced,” he says. 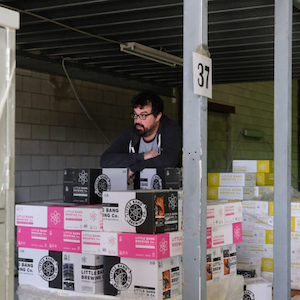 “In five years’ time, I dare say we’re going to see a lot more influence from the very big players who are buying up the craft brands and trying to assert their influence in this growing market, so to have a really decent offering right here where we are, that’s our safety.

“It feeds into that whole thing of why people get into craft beer, or craft cheese, or bread, or wine — whatever — is they want to have that genuine experience of a real product, and the ultimate way to do that is right where it’s made.

“In a world where there’s literally thousands of beers available to most of us, and a lot of those are really, really high quality … why wouldn’t you then drink politically, you know? Drink where your actual beliefs are, and that’s where people really want to support small businesses and independent businesses.”

Given their self-described scrappy beginnings, it’s with a level of unease that Davidson claims they’ve reached a level of professionalism within the businesses — a completely unintended consequence, he laughs.

But by stretching toward becoming a medium-sized enterprise, there are brand new challenges that await.

“Thank God we’re on top of the way we do things on the beer side now, because there’s so much to learn in terms of the business side. That’s where we’re really doing the learning,” Davidson laughs.

This article was first published by CityMag and The Lead South Australia.

NOW READ: What it takes to run a successful craft beer business in Australia