Where have you bean all my life: Joe & The Juice proves values-based retail can thrive

Inside a Joe & The Juice store. Source: Supplied.

This week I should be writing about US giant Sears, the latest large retailer to file for Chapter 11 in the US.

The much talked about Chapter 11 is literally the 11th chapter of the US Bankruptcy Code, which the US courts website says “generally provides for reorganisation, usually involving a corporation or partnership. A chapter 11 debtor usually proposes a plan of reorganisation to keep its business alive and pay creditors over time. People in business or individuals can also seek relief in chapter 11”.

In normal speak, it’s a company saying ‘give us time to let you, maybe, have all, or some of, the money we owe you over time, or we close it up now and you get nothing’.

I should be writing about Sears in the context of yet another huge retailer failing in the face of online retail, even though Amazon actually launched its first website 23 years ago. I should be discussing the tens of thousands of jobs being lost and the thousands of suppliers, big and small, who will lose money. And I should mention how in the US, Europe and Australia, there is still more of this to come.

But I feel I’ve done this story to death over the past 10 years of writing for SmartCompany.

Instead, I thought I’d write about a positive aspect of retail — about how well-focused, passionate and values-based retail can thrive in any sector, no matter how overcrowded or dominant the major incumbents are.

Last year, when walking stores in Copenhagen I came across many Joe & The Juice coffee shops. Some were free-standing and others sat inside the big luxury department stores. I’d seen my first Joe & The Juice in a newly refurbished CBD mall in North Sydney, then two more at Barangaroo and Sydney Airport, some weeks earlier, but had no idea how young and successful the brand was.

I’m not going to go into too much background on the founder Kasper Basse, or the ‘band of bros’ culture he created, or the fact it all started in a non-descript Copenhagen furniture store and now has over 200 stores globally. I also won’t offer an answer to the intriguing online question “does Joe & The Juice only employ beautiful people?” (Although the answer is no, it’s just that everybody in Copenhagen is beautiful!) If you want the full background story, check on Wikipedia, and donate some money to help them too.

What I will say is the culture and passion inside these quirky stores, company-owned and franchised, is palpable. The guys and girls who work there are proud to work for a young and successful company. When you ask them about the company they energetically tell you the story of its humble furniture store beginnings, and where the latest store in the world has opened. Service is good, the store layouts are very relaxed, the coffee is high-quality and the food menu is tight and relevant to city coffee lovers. The portions are thankfully small too, probably to do with the founder’s fitness ethic as a karate competitor. My only suggestion for improvement, as an ocean swimmer and paddler, would be to replace the single-use plastic. 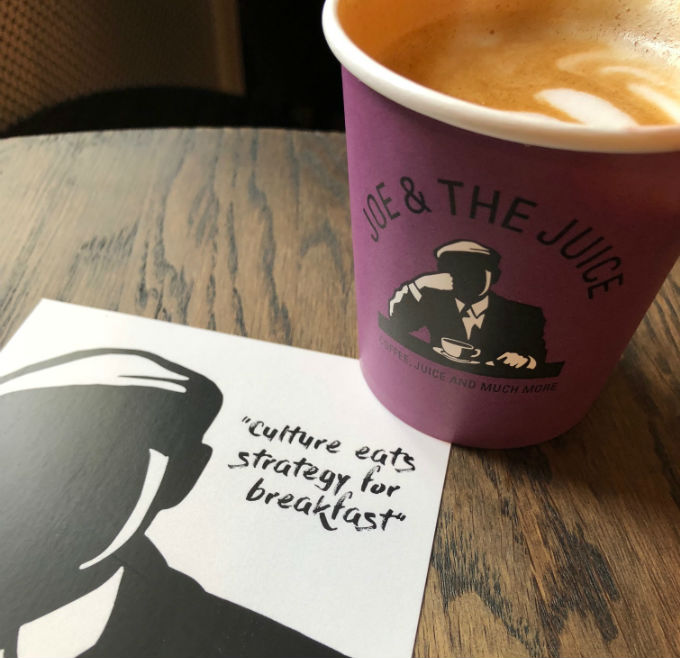 One of the coasters in the coffee shop depicts an outline of Joe and the mantra “culture eats strategy for breakfast”. I agree. In sectors where lots of people are buying lots of what you are selling, like coffee, quick-service food and on-premise beer and wine, doing simple things well with passion will be far more successful than doing complicated things innovatively.

I do not want a soy, decaf 12 oz, single roast at 103 degrees with a gluten-free, organic raspberry and apple cronut. I’d like a small latte and a scrambled egg on toast with avo, please. Served with a smile and some light conversation.

Look out Melbourne, Joe is coming your way soon.

NOW READ: From $7.5 million to almost $20 million: Why Huxtaburger expects to more than double its revenue as it ventures to NSW

NOW READ: Uber and Deliveroo in “early talks” to merge, but Australian businesses aren’t on board