McDonald’s has broken ground on its 1000th location in Australia nearly 50 years after the global fast-food brand first arrived here.

The restaurant, based in Melton South, Victoria, will become the chain’s first sustainable flagship in Australia when it opens later this year.

In addition to using recycled material in the building, infrastructure and furnishings, the restaurant will use 100% renewable energy, including solar energy sourced from rooftop panels.

It will also offer fibre-based cutlery, stirrers and straws and segregated waste streams to reduce waste and keep recyclable materials out of landfill.

This could see coffee grinds being recycled as compost for the lettuces used in Big Macs and plastic trays recycled as car park bumpers and playground equipment, according to an email circulated to the media.

“As our first sustainability flagship, the Melton South restaurant will play a vital role in allowing us to continue to test, evaluate and implement industry-leading sustainable innovations. McDonald’s Australia has always been committed,” Josh Bannister, McDonald’s Australia’s senior director of development, said in a statement.

McDonald’s Australia announced in July 2018 that it would stop using plastic straws and transition to a sustainable alternative, and in March 2020, it started phasing out plastic cutlery in restaurants nationwide.

These initiatives are part of the fast-food giant’s ongoing effort to improve its impact on the environment through its ‘Scale for Good’ program, a global McDonald’s initiative with executive buy-in. 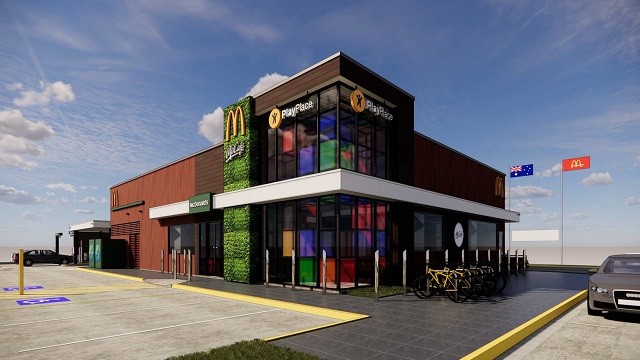 A rendering of the McDonald’s Australia’s first sustainable flagship set to open in Melton South in 2020.

McDonald’s executive vice president and chief supply chain and sustainability office Francesca DeBiase explained the purpose of the program on the company’s website: “We [recognise] that the size and reach of our business puts us in a unique position to improve people’s lives and the environment. We want to use our Scale for Good and continue raising the bar on what it means to be a responsible company committed to people and the planet.”

This focus on sustainability aligns with the brand’s ongoing efforts to attract younger consumers back to the brand, which can be seen in the global rollout of a more modern design and store concept, referred to as ‘Project Ray’ after the brand’s founder.

This concept, created and delivered by Australian design consultancy Landini Associates, first appeared in Hong Kong in December 2015 and can now be seen in restaurants across Asia, Europe, the US and Australia.

Architecture firm Richmond + Ross and interior designers Juicy Design are behind the Melton South restaurant, which is being built with long-time McDonald’s franchisee Ben Westover.

“We’re thrilled to be working with the franchisee of Restaurant 1000, Ben Westover, to build this milestone restaurant in Macca’s history,” Bannister said.

“Ben has long supported communities in surrounding areas to Melton South, as an operator of McDonald’s restaurants for more than a decade.”

A McDonald’s Australia spokesperson told Inside Retail that the company intends to roll out any viable, successful initiatives that are identified through the Melton South restaurant to the rest of the network.