Adelaide-based Riot Wine Co has been acquired by Carlton & United Breweries (CUB), but founders Joe Cook and Tom O’Donnell aren’t looking to step down any time soon, planning instead to use the capital injection to rapidly scale their national operation.

Founded in 2016, Riot Wine Co is the only business in Australia that exclusively sells wine in kegs and cans.

Supplying pubs and venues with wine in kegs is touted as being more sustainable, with one keg replacing roughly 23,000 bottles.

Everything happens for a riesling

Cook and O’Donnell were first introduced by a mutual friend who knew they were both itching to do something innovative in the beverage space.

“Tom’s the winemaker. You can ask him anything about wine,” Cook tells SmartCompany.

“Where I come in is the draught and keg side.”

“Draught wine was an obvious opportunity, especially with the expertise we could bring together.”

“On the books, we look quite small, [but] we’ve got a much broader team that is working to make Riot happen.” 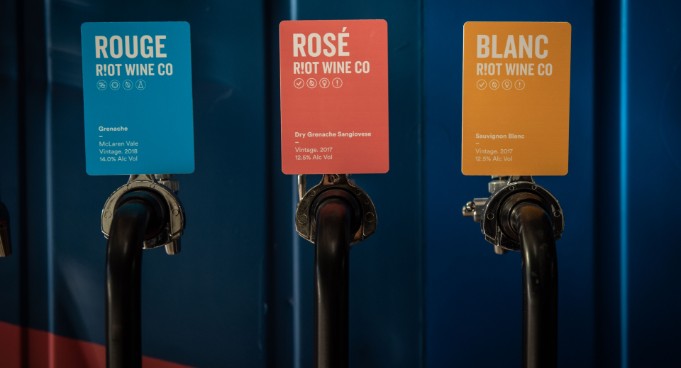 “As quickly as we can”

Prior to attracting interest from CUB, Riot completed a couple of funding rounds with private shareholders, enabling the business to grow its revenues by more than 100% year-on-year.

But “our strategy from day one was to achieve significant scale as quickly as we can”, Cook says.

In CUB, the duo found “a strategic partner with similar core values”, namely “strong partnerships, quality and sustainability”, he says.

“I’m personally quite close to the founders of 4 Pines and Pirate Life, which have been previously acquired by CUB. So we did our due diligence and met with them.”

A capital injection from CUB will be used to hire four new employees and expand Riot’s cellar door ‘The Cannery’.

“What is currently sort of a 20-person textbook cellar door will become a 50- to 100-person tourist destination, a wine tasting destination, where people can get educated on what we do and how we do it,” Cook explains.

The founders will be “taking people behind the curtain if you like”, he says, “doing what brew pubs have done for breweries”.

And, while the duo will have room to grow, Cook stresses nothing will change from a management perspective.

The acquisition will see things “changing in the right way”, he says.

“Tom and I are still in the business and are determinately passionate about what we are doing. You’d sort of have to wrestle us away from it to be perfectly honest,” he adds.

When asked about public perceptions of acquisitions, Cook doesn’t seem too concerned.

“I would suggest most people wouldn’t know if the wine brands they’re drinking are owned by a big national company or a small mum-and-dad operation.

“There are plenty of advantages of being a part of a bigger organisation,” he says.

This is CUB’s first foray into wine, but it isn’t the first beverage business it has acquired. It purchased Port Adelaide brewery Pirate Life in November 2017 and Sydney’s 4 Pines in September 2017.

CUB is also the owner of prominent Australian beer brands such as Carlton Draught, Pure Blonde and Victorian Bitter.

The deal with Riot comes just two months after Belgian multinational AB InBev agreed to sell CUB to Japanese giant Asahi for $16 billion. The deal is pending, however, requiring approval from the ACCC.

NOW READ: The power of passion: Naked Wines’ co-founder reflects on what made the startup successful