A Melbourne-based lawyer went viral on TikTok after posting a video expressing disbelief she paid $8.90 for a soy latte, amid warnings inflation will force more businesses to pass costs on to consumers.

According to SevenLifestyle, Traci Chen was visiting Sydney over the weekend when she purchased a coffee at a hotel bar at Barangaroo at Sydney Harbour. 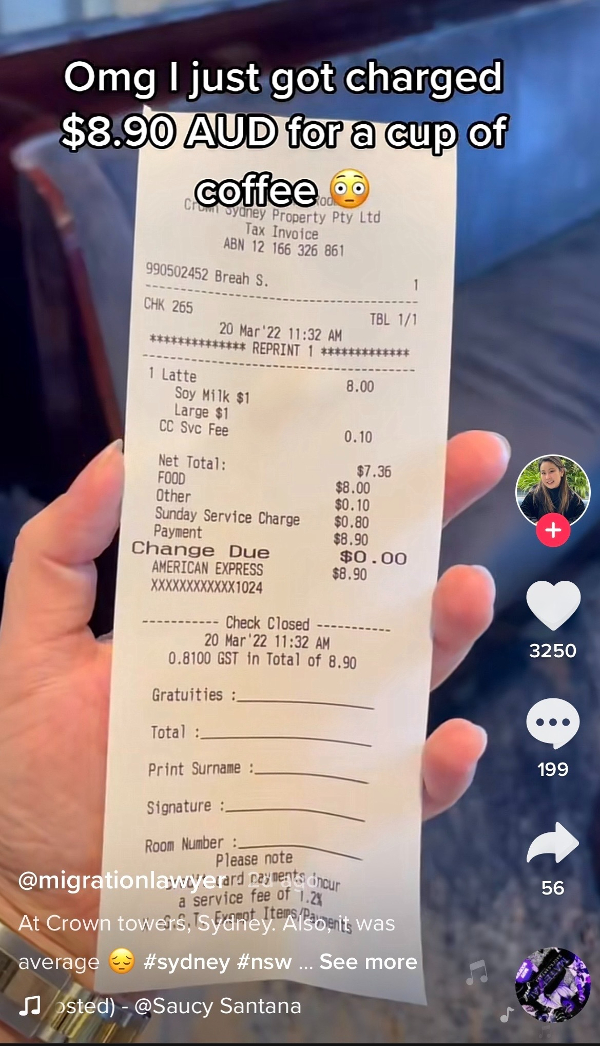 Commenters on the app echoed Chen’s shock at the elevated price, with one posting: “I will not buy a cup of coffee if it costs more than $5.”

Chen told SevenLifestyle she thought her expensive order might have been a one-off until a friend responded to the video by telling her she recently paid $10 for a takeaway coffee in Brisbane.

The video’s popularity is another sign consumers are increasingly noticing the effects of inflation, which is affecting everything from petrol prices to supermarket essentials.

The Morrison government has flagged addressing cost-of-living pressures will be front and centre in its budget revealed next week.

While inflation has been rising over the past year due to supply chain delays, the Russia-Ukraine conflict has pushed prices for everyday costs like petrol even higher.

“Most retailers are working hard to absorb these costs in the short-term however, at some point these costs will be ultimately passed onto the consumer,” Paul Zahra, chief executive of the Australian Retail Association, said last year.

David Parnham, president of the Café Owners and Baristas Association of Australia, told the ABC the industry body expects all Australians may soon be paying up to $7 for a regular cup of coffee as cafes nationwide struggle to absorb growing overhead costs.

“What’s happening globally is there are shortages obviously from catastrophes that are happening in places like Brazil with frosts, and certain growing conditions in some of the coffee growing areas,” Parnham said.

Parnham noted production costs had been rising for a number of years — but cafes have largely resisted passing on costs to customers.

“The reality is it should be $6 to $7. It’s just that cafés are holding back on passing that pricing on per cup to the consumer,” he said.

Condev Construction has become the latest casualty in the flailing construction industry, following a string of high-profile collapses.

Ian Whitworth: Why SMEs should put up their prices, and not follow Scott Morrison’s ‘third rate’ business advice

For us regular SMEs, putting up prices is a constant battle, writes Ian Whitworth. But after two years of starvation, it's time to act.