A forgotten coat has sparked a heated exchange between an Australian tourist and an Irish restaurant on TripAdvisor, after the customer said the business “lacked integrity” because it hadn’t sent the coat and glasses he had left behind back to him in time.

The customer gave Sligo’s Eala Bhan restaurant a three-star review on TripAdvisor last week, saying that while the food was “quite reasonable”, after leaving his glasses and windbreaker behind, he was annoyed the items had not been returned to him as promised at the time of writing the review. 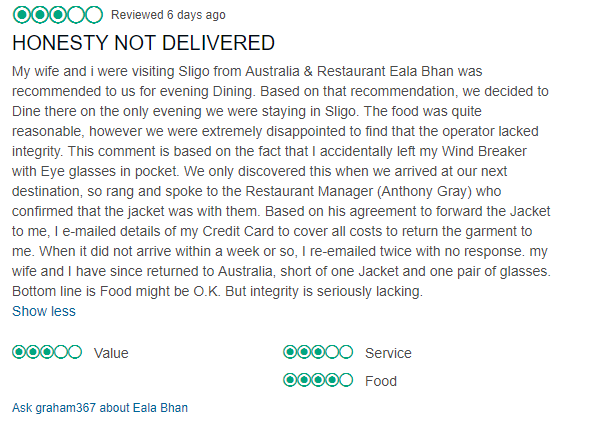 The restaurant owner responded with his own perspective, penning an open letter to the diners and saying it “beggars belief” they could question his integrity given “I never laid my mince pies eyes on you!” 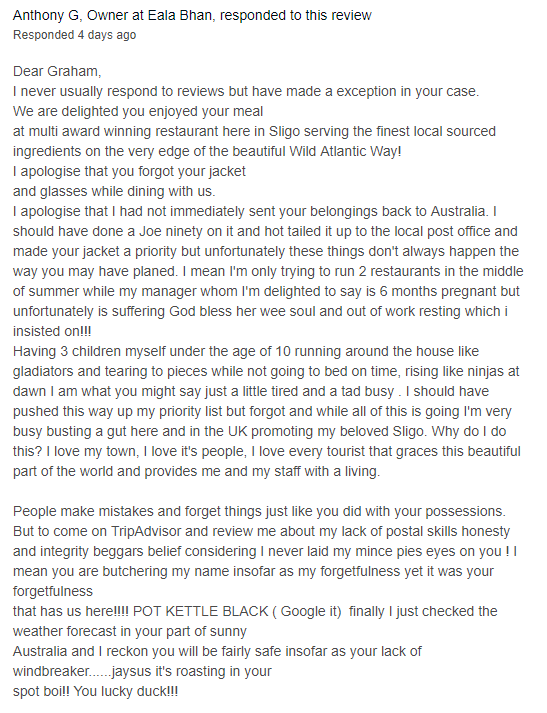 Assuring the customer that his possessions were now en route to Australia, restaurant owner Anthony Gray said he was flat out running two businesses and raising three children under the age of 10.

“I should have pushed this way up my priority list but forgot,” said Gray. 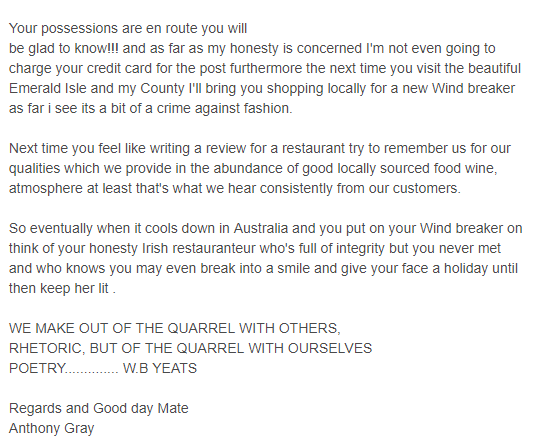 He also questioned whether missing a windbreaker in Australia was such a big deal, considering it was so much warmer there than in Ireland. “Jaysus, it’s roasting in your spot boi!! You lucky duck!!” he said.

The restaurateur finished the letter with a W.B. Yeats quote, and a “Good day Mate”.

This is far from the first time a business owner has hit back at a customer over their actions. Last year, staff at Gloria Jeans posted social media support of a staff member after a customer received racist comments at work, while back in 2015, a customer review for Gelato Messina that described an employee as a “fat Asian bitch” prompted the gelato business to respond by saying they should be “absolutely ashamed”.

However, there is a difference between calling out a consumer for their potentially bigoted behaviour and responding to unreasonable customer demands online, says social media expert Catriona Pollard.

“I absolutely think it’s important for a brand to establish how they expect their customers to behave online. However, there is a way of doing it,” she says, highlighting that the temptation to “lash out” rarely gets businesses anywhere.

“You’ve got to remember that whatever you put down, other customers will be seeing that as well,” Pollard says.

The temptation to “tell off” a demanding customer online is real, says Pollard, but business owners should do everything they can to act with grace even if they know they are in the right.

“I think you can certainly use humour in circumstances like this, but I think that it’s actually an opportunity to take the high ground. Use it as a learning experience,” she suggests.

Even when consumers are asking you to go above and beyond what is reasonable, there is always an opportunity to deliver on these demands while also pointing out this means you are going “above and beyond” what you should be in the name of service.

“I really do think that it’s about asking ‘how do we want our brand to be seen online?'” she says.

While there is no doubt consumers now see social media as an easy and effective way to “bag out brands”, getting too bogged down in negativity takes energy and is less likely to make other customers engage with you, Pollard suggests.

“I really do think both sides [customers and companies] need to understand the impact of negativity,” she says.

SmartCompany contacted Eala Bhan restaurant but did not receive a response to requests for comment prior to publication.

“Fluffy towel syndrome” is a thing on TripAdvisor. 99% of the reviews for a place give it 5 stars but one person gives it 1 star because “the towels weren’t fluffy enough for my wife”. You learn to rate the rater.