Victorian Premier Daniel Andrews said he would be enjoying a drink from “higher up the shelf” last night, and his choice of tipple has put a Melbourne small business in the spotlight.

After announcing a major easing of Melbourne’s coronavirus restrictions on Monday, following a day when the state recorded no new cases of COVID-19, Andrews was responding to a question about whether Victorians could now “get on the beers”.

“I don’t know that I’ll be drinking a beer tonight,” the Premier said.

“I might go a little higher up the shelf”.

Later in the evening, he shared a photo of two glasses sitting alongside a bottle of whisky from Melbourne’s Starward Distillery.

Said I’d go a little higher up the shelf. Here’s to you, Victoria. pic.twitter.com/JbsbmUxmoZ

While some members of the public took issue with the Premier taking a moment to celebrate the state’s efforts to contain the virus — especially as many Victorian are currently out of work — the social media posts did highlight one small business that has been closed for weeks.

Starward whisky has been made in Port Melbourne since 2007 when founder David Vitale established the distillery with the goal to make a “distinctly Australian” dram.

The business has 35 employees, and several global awards under its belt.

Speaking to SmartCompany this morning, Starward’s global head of communications Emma Day said the team was “surprised but happy” to see one of their bottles featured in Andrews’ posts on Twitter and Facebook.

“Throughout the whole Melbourne lockdown, we have felt and seen the love from Australia, from the Click for Vic campaign, to Dan Andrews’ social posts,” she says.

“We’re glad Melbourne and Melbourne’s hospitality is getting the spotlight and support.” 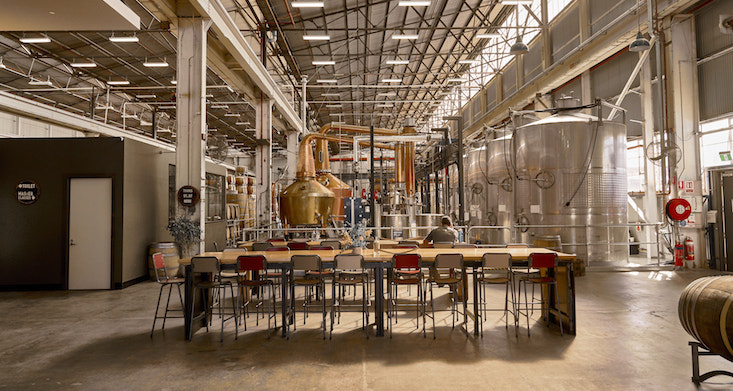 Inside the Starward Distillery. Source: supplied.

It was no doubt a deliberate decision by the Premier to choose a Melbourne-made whisky for his posts, and Day says it comes at a time when the local industry is ready to open back up.

“It has been a difficult time for all Victorians, and we’re excited to see the restrictions ease and Melbourne’s beloved hospitality roar back to life,” she says.

The Starward Distillery is preparing to reopen on Friday, November 6, and will be releasing a new whisky to coincide with its distillery tours and tastings starting up again.

Day says the business has been able to access both federal and state support while in lockdown, with the Victorian government’s Click for Vic campaign to showcase hospitality and craft producers in particular generating “great support” for the 13-year-old business.

“The pandemic has changed the way people shop and has also influenced what they choose to imbibe,” Day says.

And as for whether the Starward team are hoping others take Andrews’ lead and choose drinks from “higher up the shelf” as the state emerges from its tough restrictions, Day says they have a simple wish.

“We just hope everyone continues to support local and celebrate our Victorian hospitality industry”.

Buy From The Bush has partnered with PayPal, turning what started as a humble hashtag into a permanent marketplace for regional businesses.

Subscription startup Whisky Loot has seen a 20% uptick in business from Victoria in the past two weeks alone, as Melburnians bunker down.

The Starward whiskey was gifted to Premier Andrews (and a bottle for Prof Sutton) by supporters – and instigated by Alex Devantier (twitter @alexdevantier).

Kinda true, the pictured scotch is what Cath had already poured at home and sent it to me, Dan donated the scotch and vodka we sent to the health team