Hundreds of customers have questioned a Sydney hotel after it responded to reports of customers being served a steak full of “worms” by saying the situation was caused by blowfly larvae being laid after the meal was cooked.

Last week customer Stella Kim, posted a Facebook video of showing maggots crawling on meal that was served when she and her boyfriend attended The Ranch hotel for an anniversary dinner, reports the ABC.

The customer said she couldn’t believe the situation was happening at a well-known venue. The hotel’s parent company ALH told the ABC the customer had been offered a refund and vouchers.

However, a post on The Ranch’s Facebook page explaining the situation yesterday has prompted hundreds of comments from concerned customers. 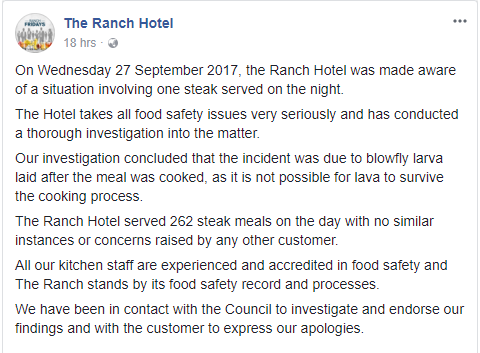 In the post, the business concludes the incident was due to “blowfly larva [sic] laid after the meal was cooked, as it is not possible for the lava to survive the cooking process”.

The business assures customers that out of the more than 250 steak meals served that night, there were no similar issues.

However, the reference to larvae has concerned some customers, who have questioned how long it takes for an egg to hatch once it is laid on food.

“You think that makes it sound better?” one comment writer asked.

Others expressed concerns this could mean there were blowflies surrounding the venue or in the kitchen.

SmartCompany has contacted The Ranch for further comment on the incident but did not receive response prior to publication. SmartCompany was unable to contact the customers involved.

Take care on the “ick” factor when communicating with customers

Director of CP Communications Catriona Pollard says while it’s critical a business is up front about resolving issues involving food, care should be taken with language on social media to ensure the focus is on the resolution, rather than the cause.

“Be aware that being really detailed about how something like this happened can add to the gross or ick factor of it,” Pollard says.

She says best practice for updated customers on any incidents like this is to “shut it down as quickly as possible”.

This doesn’t mean denying the cause of the issue, but focusing instead on exactly what is going to be done to prevent anything similar in future.

“As a customer, I would want to see specific resolutions.”

Branding expert Michel Hogan says businesses should already have a plan in place about how they will respond to such concerns, and how much information it makes sense to give.

“You have to ask, ‘does anybody benefit from the knowledge for example that the fly laid the eggs after the steak was cooked?'” she says.

“I would say explain ‘we’re really sorry, we’ve taken these steps’. Talk about how you’ve fixed it, rather than offering an icky or exhaustive explanation.”