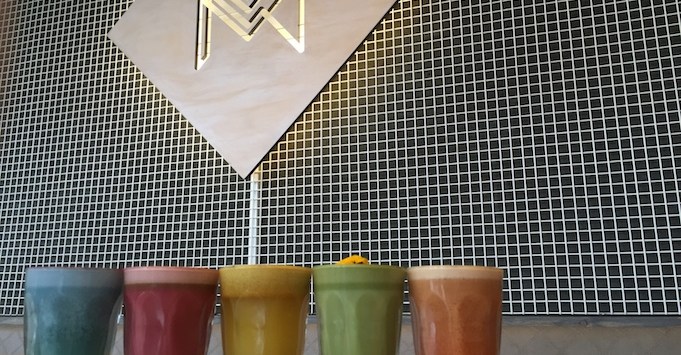 Some of the coffees on offer at Matcha Mylkba. Source: Supplied

Coffee drinkers around the world are taking their taste buds to new places thanks to creative baristas bringing innovation into cafés. And Australian cafés are taking part in the experimental trend in a bid to offer their customers more options.

From algae-infused lattes to rainbow-coloured caffeine kicks, we’ve rounded up some of the interesting new blends to kick off your morning.

One café that has been attracting attention for its coffee experiments is vegan café Matcha Mylkba in the Melbourne suburb of St Kilda.

Co-owner Mark Filippelli says the Matcha Mylkba team came up with their inventive menu of nutritious lattes minus the coffee for people who may be intolerant and others who are looking for variety outside the usual coffee game.

But the future, he says, is where baristas take it next.

“We dedicate one day a week to the chefs and the beverage manager to try and be innovative, and find new ways to do things,” he says.

“We have a prep kitchen down the road where chefs get scientific.”

Filippelli believes the future for Melbourne cafes is in the beverages that complement coffee, such as fermented tea or other innovative and nutritional drinks.

“We’re not trying to replace coffee as such but give people [other] options.”

One of Matcha Mylkba’s latest inventions is the Smurf Latte, whipped up from algae, lemon, ginger agave and “coconut mylk”.

Other creations include the Apple Latte, made from apple cider, apple pie spice and cinnamon, as well as a Carrot Cake Latte, made with carrots, dates, ginger, nutmeg and coconut mylk.

These inventions are proving to be quite popular with the café serving around 3000 lattes a week.

Filippelli says the team is now experimenting with a violet latte made from a unique purple corn filled with anti-oxidants. They’re planning to serve this creation in a couple of weeks.

Another Melbourne café giving coffee a healthy kick is Too Many Chiefs in Brighton, run by siblings Jayben and Blaire Newson.

Their Golden Latte combines ginger, cinnamon and turmeric to give drinkers an alternative start to the day.

Other healthy drinks on their menu include the Beetroot Latte and increasingly popular Matcha Latte, which Weekend Notes says “as you’d expect, taste[s] like the green tea powder it’s made from.”

After rainbow coloured coffee took off in Las Vegas and went viral on Instagram, many Australian baristas started to put food colouring into their coffees to brighten up the mornings of customers.

Local Mbassy in Sydney serves a purple Hot Taro Latte, a winter treat with a “nutty-vanilla taste”, as well as a Red Velvet Latte, which it describes as a “warm, marshmallow cupcake in liquid form”.

A sip of this classic will cost you a mere $50 at Herveys Range Heritage Tea Rooms in Queensland.

The fine coffee is brewed from coffee cherries “eaten and defecated” by the gorgeous toddy cat.

Whether you think it’s a true delicacy or a crappy prank, Kopi Luwak remains one of the world’s most expensive choices for coffee lovers.

Chefs at 85 Degrees Café in Sydney were inspired by the sprinkling of salt on fruits like pineapple to release sweetness, and decided to apply the technique to coffee.

Their coffee with sea salt, hot or cold, has become one of their best selling drinks.

If you’ve got time to fly out for your coffee, give this one a shot.

New York City’s Stand Coffee has come up with a concoction to give espresso drinkers a unique twist on their caffeine hit.

“After a second or two, a strange and somewhat unappealing nutty aftertaste kicked in,” it said.

Tip to get creative with your menu

If you want to add a bit of experimentation to your business’s menu, here’s a piece of advice from Filippelli.

“If you do something because it’s a gimmick, [customers] may try it once but they won’t come back,” he says.

“If you take time to make something that actually tastes good and has a genuine, nutritional benefit, people will come back.”

I do love my Golden Lattes which I make at home with a plunger-style milk frother. Just go easy! Too much and you’ll have heart palpitations!

What have barristers got to do with this, is someone going legal?

the wordmistress
Reply to  Pauline Hudspith

I’m so glad you mentioned it! As a copywriter, I try not to be too publicly nit-picky 🙂 (But that was quite glaring!)

Eloise Keating
Reply to  the wordmistress

Hi Pauline and the wordmistress, thanks for picking up the typo. I’ve updated the article. Thanks, Eloise