COVID has wreaked havoc on Aussie manufacturing. Here’s why supporting the SME sector will help

Australian manufacturing today is at its lowest point ever. During its 1960s heyday, local manufacturing accounted for over 30% of GDP. Currently, that figure is just 5.6% of GDP. And that is despite a quadrupling of output since the 1950s. But it doesn’t need to be this way.

The Australian government has committed to promoting and expanding domestic manufacturing in recent years. Based on the recent Ai Group’s Performance of Manufacturing Index, it appears that something is making a difference: we’ve seen nine months of consecutive growth since the COVID-induced global disruptions hit last year. It is a promising sign.

However, a 2020 Australasian Supply Chain Institute report revealed the overall maturity of Australian supply chains fell by six percentage points (from 52-46) between 2018 and 2019. And that was despite unparalleled investment in and focus on automation.

“Although members have performed better in technology and automation and compliance and regulation compared to last year, they were performing at the same level for logistics and distribution and underperforming in all other components,” it noted.

So, the sector is growing. However, the current approach isn’t working — and the pandemic has made this painfully clear.

It’s no secret that we are living through the Industry4.0 era: the fourth industrial revolution aimed at leveraging connectivity, advancements in technology such as augmented reality and 3D printing, big data, and ever-increasing computing power. The government’s plan to resuscitate the ailing manufacturing sector not only acknowledges this; it is fundamentally built upon a heavy technology focus. But technology isn’t a silver bullet.

The current approach has resulted in businesses large and small implementing new technologies as solutions looking for problems to solve. Yet the majority still aren’t advancing as they should or could. This lack of advancement boils down to the fact that these businesses are overlooking fundamental operational excellence principles.

Output isn’t necessarily a problem: as previously mentioned, the sector’s output has quadrupled in the past six decades. But productivity has failed to keep pace. As the ABS graph below demonstrates, labour productivity is struggling well below the 30-year average. Automation and technology alone haven’t delivered the promised productivity benefits. 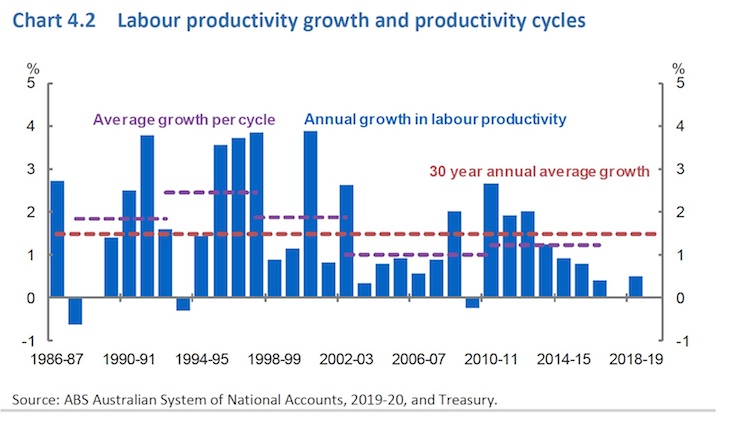 Meanwhile, a 2020 McKinsey global study of 325 companies across 13 industries exposed some daunting statistics in terms of supply chain disruptions. This data depicts a different world to the one we think we live in today. Among its revelations were:

In response to the McKinsey findings, some — such as the Australian Financial Review — suggest that COVID-19 has induced a greater amplification of factors that had already been starting to separate the best businesses from the laggards. Essentially, the pandemic has accelerated a process already underway, perhaps by a number of years.

The way forward is clear

From an economic perspective, the way out of our current ordeal is to grow Australia’s manufacturing capability and productivity over the next 40 years. Yet, as the recently-released Intergenerational Report points out, doing so requires a different approach. We can’t keep taking one step forward and two steps back.

In his book Atomic Habits, NY best-selling author James Clear writes, “You do not rise to the level of your goals. You fall to the level of your systems”. I couldn’t agree more. We need to support the SME sector to build and sustain sound operational excellence fundamentals first and foremost, before looking toward technological interventions. Technology can only deliver its promised productivity benefits when it is applied to well-greased processes and utilised by an engaged, empowered workforce.

Getting this strategy right will help to unleash latent capacity quickly, which can then be supercharged with the power of cutting-edge technology. Make it effective first then make it efficient, rather than make it efficient and hope it will be effective.

The government’s $1.5 billion manufacturing scheme has minimal independent oversight: Should SMEs be concerned?

Can Australian-made products compete on price?

A recent Roy Morgan poll shows 89% of Australians believe more products should be manufactured in Australia.