David Haymes (second from the right) has passed away. Source: supplied

A respected member of Ballarat’s business community, David Haymes, has passed away. Haymes was the face of Haymes Paint for more than 50 years.

The family acknowledged Haymes’ death in a statement released on Tuesday, saying his dedication to the Haymes Paint business for nearly 55 years never wavered.

“It is with great sadness that we confirm the passing of David Henry Haymes, aged 77, on Tuesday 15 June 2021,” the family said.

“David was well known for his leadership of the Ballarat based Haymes Paint business as well as his vision and unbridled passion for all Australian owned businesses and the Ballarat community.” 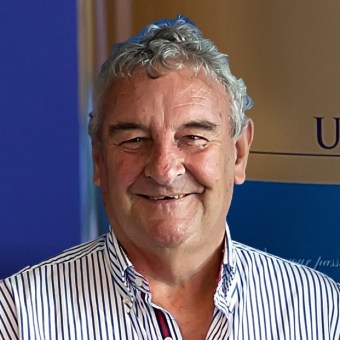 Haymes’ took over the role of chief executive of the family-owned paint company in 1974. The business was first founded in Ballarat in 1935 by Haymes’ father Henry Haymes.

Throughout his life, Haymes played an active role within his local business communities through organisations including APEX, Australian Chamber of Manufacturers (AIG), Australian Paint Manufacturer’s Federation, Family Business Australia, Federation University, among many others.

The family said he was also a mentor and inspiration to all those he met, due to his authentic and personal interest he had in everyone.

“He will be missed dearly by his wife Jenny, three children, Belinda, Matt and Tim, along with their families, and every member of the wider Haymes Paint family,” they said.

Haymes Paint is the largest Australian-owned paint manufacturer with stores in every Australian state and territory. It is now in the hands of the fourth generation of Haymes family members.

Plus exclusive‘You are a salaried prisoner’: Why Ian Whitworth rallies against private equity management

This exclusive book extract covers Whitworth's disdain for private equity firms, and why customer credit should be strictly tightened.