State by state: An August update on Australia’s property markets

After a two-year slide, the latest stats show we’re at or near the bottom of this property cycle.

Corelogic reports that in July 2019, dwelling values increased across all capital cities except for Adelaide, Perth and Canberra.

The stabilisation in housing values is becoming more broadly based, with five of the eight capital cities recording a subtle rise in values over the month, while the regional areas of South Australia, Tasmania and Northern Territory also recorded a lift in housing values in July.

Over the month, combined capital city values increased by 0.1% while the combined regional markets recorded a -0.2% fall.

There has also been a notable change in buyer sentiment, with buyers out in the market applying for loans, looking at properties and making offers.

The turnaround in sentiment can be traced to a number of factors: 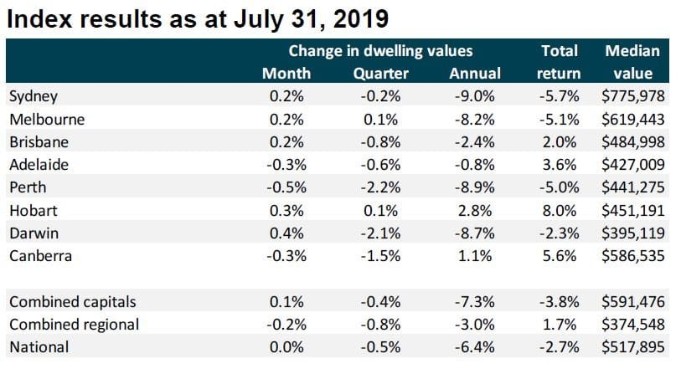 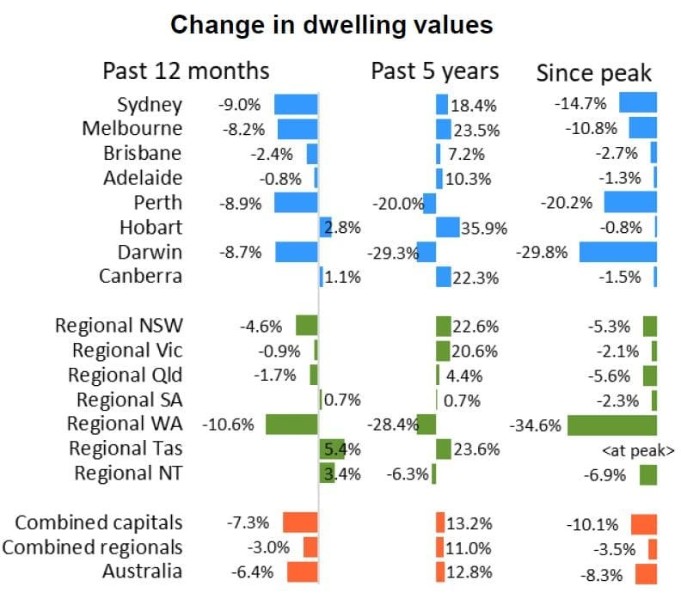 In Sydney, housing values ticked slightly higher for the second consecutive month, providing further confirmation the market has commenced what is likely to be a gradual recovery after values fell almost 15% from their July 2017 peak.

Sydney dwelling values recorded a small but positive movement in July, rising 0.2% over the month, taking the annual rate of decline back to -9%.

The apartment sector is showing a slightly stronger performance relative to houses, with values declining less during the down phase and slightly leading the charge as the market stabilises.

This is a great countercyclical time to look at buying an investment grade property in Sydney with little further downside and the prospect of the market continuing to move forward.

This takes the annual change in Melbourne housing values to -8.2%, down from a recent low of -10%.

Also, it’s the most expensive quarter of the market where the improved performance is most notable.

Overall, property values will be underpinned by a robust economy, jobs growth, Australia’s strongest population growth, and the influx of 35% of all overseas migrants.

Brisbane’s property downturn has been quite shallow compared to the big two capital cities, with local values only 2.9% below their peak.

But this followed a relatively mild growth cycle where growth in housing values in Brisbane averaged only 1.4% per annum over the past five years.

There is little difference between the performance of houses and units across Brisbane, with values down 0.8% over the past three months across both sectors of the market.

While Brisbane apartment values remain 12.5% below their 2010 peak, the unit oversupply has slowly been absorbed due to the rising population at a time of less new supply coming on to the market.

Brisbane’s economy is being underpinned by major projects, such as Queen’s Wharf, HS Wharf, TradeCoast, Cross River Rail, the second airport runway and the Adani Coal Mine, but jobs growth from these won’t really kick-off for a few more years.

Adelaide is the most affordable capital city but its property values peaked in December 2018 and since then dwelling values have fallen a modest 1.3%.

While things look good for Adelaide property in the short term, over the next few decades the bulk of Australia’s long-term jobs growth, economic growth and population growth will occur in our 4 big capital cities meaning there are better locations for long term wealth creation that Adelaide.

Perth has recorded a further reduction in dwelling values, down 0.5% over the last month and 8.9% lower over the past 12 months, taking values 20.2% lower since peaking in June 2014.

The ongoing weakness in the Western Australian housing market can be attributed to a mix of weak economic and demographic conditions overlaid with a tight credit environment.

Perth values are now among the most affordable amongst the capital cities, but it’s much too early for a countercyclical investment in the west. I can’t see prices rising significantly for a number of years. 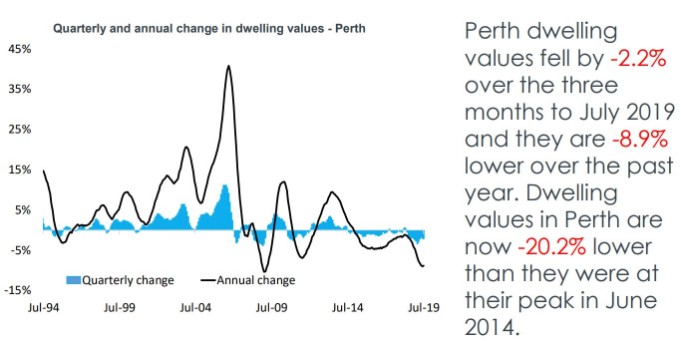 Hobart has been the best performing property market in the last three years, but its boom is now over.

CoreLogic figures show prices are stabilising and now 0.8% below their peak in March this year and it’s likely the Hobart market will continue to lose its momentum over the year.

Currently, values are 29.8% below their historic averages and it is unlikely we’ll see these types of house prices again in the next decade.

The small size of the Darwin market makes it more susceptible to local events, and Darwin typically has a higher and more variable vacancy rate as a product of a large transient working population.

Canberra’s property market has been a ‘quiet achiever’ with dwelling values having grown 1.4% over the last year, but they seem to have peaked in April this year. 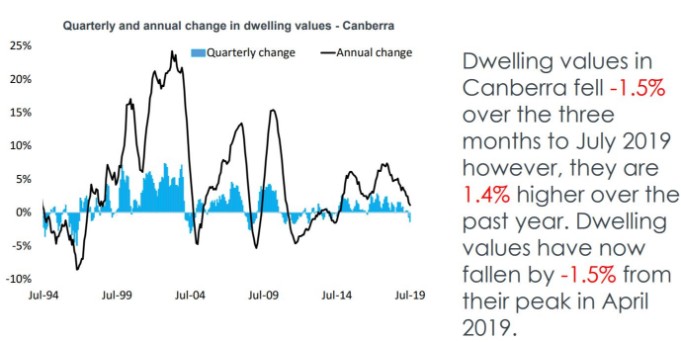 We’re at an interesting stage of our property cycle with signs that we’re nearing the bottom.

While there may be a little more downside in our big two capital city markets it looks like the best time to buy counter-cyclically in Sydney and Melbourne for over a decade and to ride the Brisbane property cycle.

Of course, property will remain a sound asset for long-term wealth creation, but now more than ever correct asset selection will be critical, so only buy in areas where there are multiple long-term growth drivers such as employment growth, population growth or major infrastructure changes.