Australia’s population growth – where is it happening?

Australia’s population hit a milestone – 24 million people in February this year – 17 years earlier than official predictions made at the turn of the century.

We added the latest million people in record time.

This will be by a combination of 164,103 more births than deaths (natural increase) and an increase of around 214, 373 due to migration. 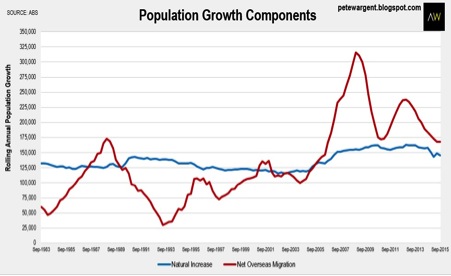 According to the ABS, we’re having:

Where are they all going?

The Australian Bureau of Statistics reports the following breakdown of population growth of 317,000 people in the year to September 2015:

That’s why I spend a lot of time researching and writing about the economy.

The figures above clearly show that Melbourne and Sydney lead the pack, with more than half of Australia’s population growth occurring in our two big capital cities.

They also confirm why I continue to recommend avoiding investing in regional Australia or in short-term hotspots.

For example, recently there have been a number of people recommending investing in Hobart because it is had a short period of price growth (up 4.8% over the last year.)

In reality Hobart is only playing catch up with Hobart’s capital growth not kept up with inflation since the end of the last property cycle.

While Hobart is a lovely place to live, with a total increase in Hobart’s population of 1,700 people over the last year, that’s hardly the stuff that makes property prices grow.

It’s much the same in most regional locations of Australia.

For mine, as a property investor I’d only be investing where there are multiple property growth drivers, two of which are sustained economic growth and long term population growth.

Interesting but there is another important driver of population growth, in addition to births and (mostly temporary) immigration/residents such as students, that adds to the estimated resident population.

It’s the ageing population with over 85 year olds being the fastest growing segment, and the older generations’ longevity makes a cumulative statistical effect on the headline number, thus increasing it (even without the permanent skilled migration program).

3 years of falling actual births and not a mention Mr Y. Now below 300,000 births pa and what is about to come is the doubling of our actual deaths as 80 years after a baby boom, comes a death bust.

WHY is everyone so keen on ‘growth’, especially population? Most agree that improvements in tech and AI will lead to ever increasing loss of low-skill jobs. What unemployment rates can we sustain? With finite resources, the growth pyramid cannot be sustained for ever. I’d rather see a cap on population, say 20 million, we could then cut back on expenditure on NEW roads, hospitals, schools, rail, etc. and house prices would finally level off. We can sustain or grow the economy my concentrating on our smarts especially in science/tech/agriculture/medicine (rather than the constant cuts to these areas by pollies whose sole knowledge and expertise seems to be law and politics).