This year saw some significant changes in our property markets. The year started with a bang and finished with a whimper.

And in the middle:

Over the year, only Melbourne and Hobart have recorded value growth in excess of 10% while values are lower in Perth and Darwin. 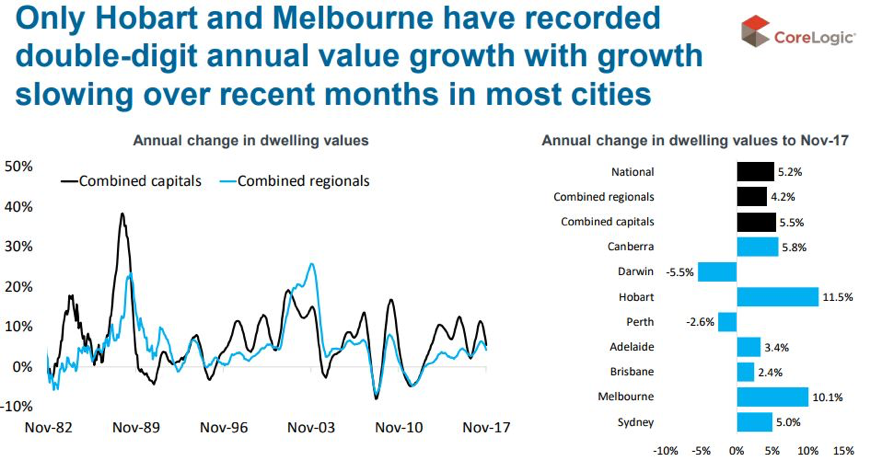 What’s happening around the states?

As always, our markets remain fragmented, driven by local economic, demographic and supply and demand factors.

2017 was the year the Sydney property market decided to take a breather.

Having said that, Sydney has had virtually no overall growth for the last six months now, and the continual headlines warning of the end of the Sydney property boom is concerning many investors and potential home buyers who are standing in the sidelines waiting to see what happens.

Of course, there is not one ‘Sydney property market’. There are multiple markets defined by geography, price and type of property. And the market for A grade homes and investment grade properties is still strong.

By the way… there is no evidence of a bubble bursting or a hard landing.

There are still a number of growth drivers including a strong economy, population growth and overseas investment (albiet at lower levels)

However, prices are stabilising after more than five years of strong growth where values have risen by close to 70% during that time.

I see a strong economy with significant jobs growth, a rising population and the Harbour City’s status as an international financial hub, supporting continued property price growth over the next few years, albeit at a slower pace. 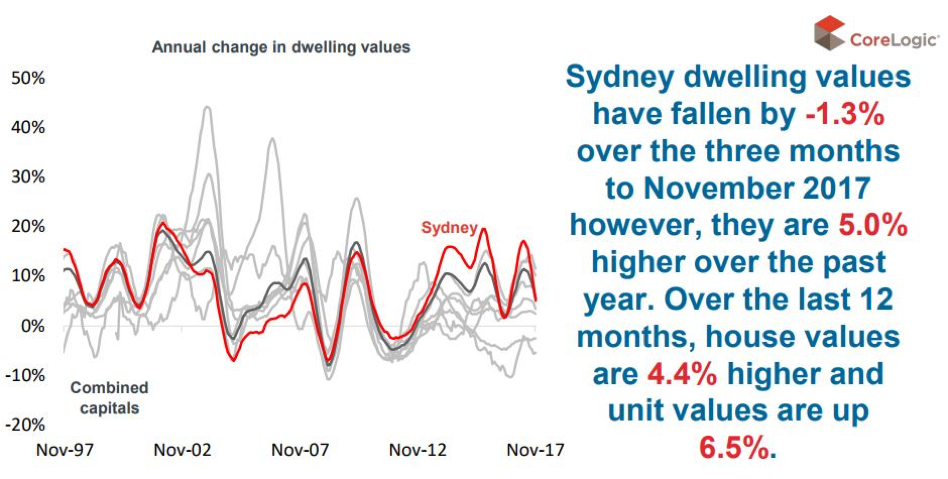 The Melbourne property market, had another strong year (+10.1%), performing better than most commentators predicted. This was fuelled by strong population growth (around 2.3% per annum), a booming economy creating more jobs than anywhere else in the country and once again being voted the world’s most liveable city.

The Melbourne apartment market has not performed as well as the house market, but is starting to pick up as the first home buyers grant aides a raft of new home buyers entering the market, buying up established apartments.

However, the anticipated oversupply of CBD apartments did not eventuate, as 144,400 new residents moved into the state over the last year helping soak up all the new construction.

While the western growth corridor has been the predominant area for population growth, in part because of its affordability, the best investment location in Melbourne remain in the more established inner east, south east and inner northern suburbs. 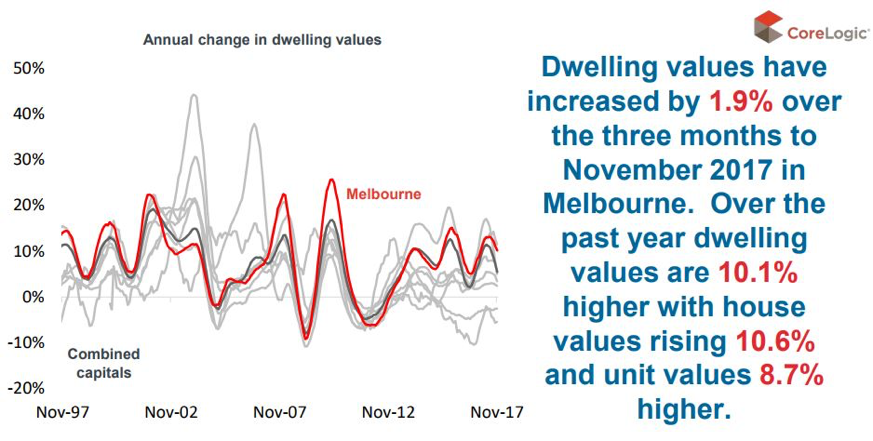 While the Brisbane property market only rose 2.4% over the last year, there is great potential upside for Brisbane houses which are considerably cheaper than Sydney or Melbourne.

Brisbane’s market is very fragmented, but there are still some areas performing respectably with good investment prospects and great places for young families to live cheaply.

There are some turnaround signs including employment growth and a number of impressive infrastructure projects in the pipeline and this will lead to population – much of it from interstate migration.

On the other hand, there is a significant oversupply of new high rise off the plan apartments overshadowing the inner city area and nearby suburbs, with owners now giving significant incentives to attract tenants at a time of rising vacancy rates.

These apartments are what I call ‘investment stock’ (built for investors) which is very different to ‘investment grade’ which are properties that outperform the market.

Some of these new apartments are now reselling at significant losses, demonstrating how far values have fallen and this has had a flow-on effect, dampening values of established apartments in Brisbane’s inner and middle ring suburbs.

Investment bank UBS has warned one-in-five foreign property buyers is failing to settle on their new Brisbane apartments due to tighter regulations. 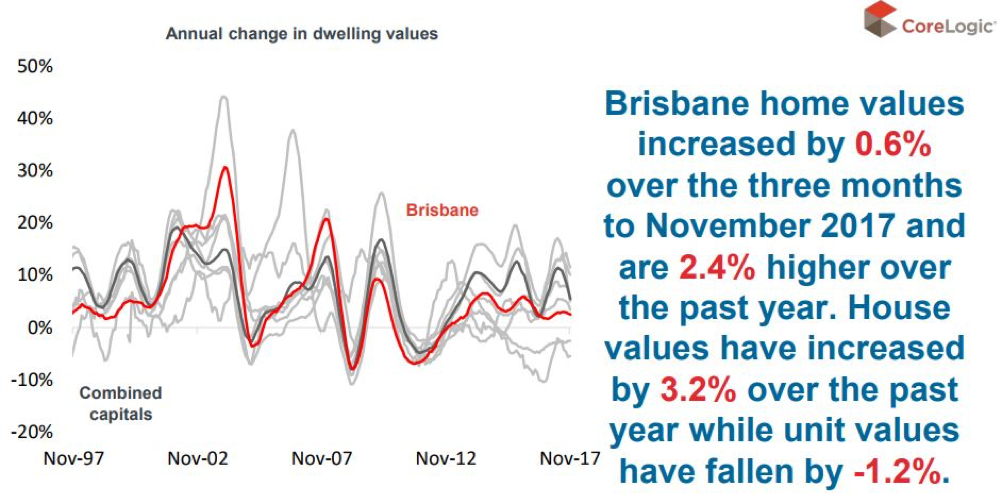 Like the rest of Australia, the Adelaide property market is very fragmented with some suburbs showing three times the capital growth of others.

Overall home values are up 3.9% over the last 12 months while unit values only increased by 0.9%.

The northern suburbs (+4.8%) performed the best over the year. Adelaide’s south grew 3.6% and the Central Hills increased by 2.7%, while the western suburbs grew by 2.6%.

I know some investors are looking for opportunities in Adelaide hoping (speculating) prices will increase but there are few growth drivers in Adelaide with fewer than 8,000 new jobs created there last year. 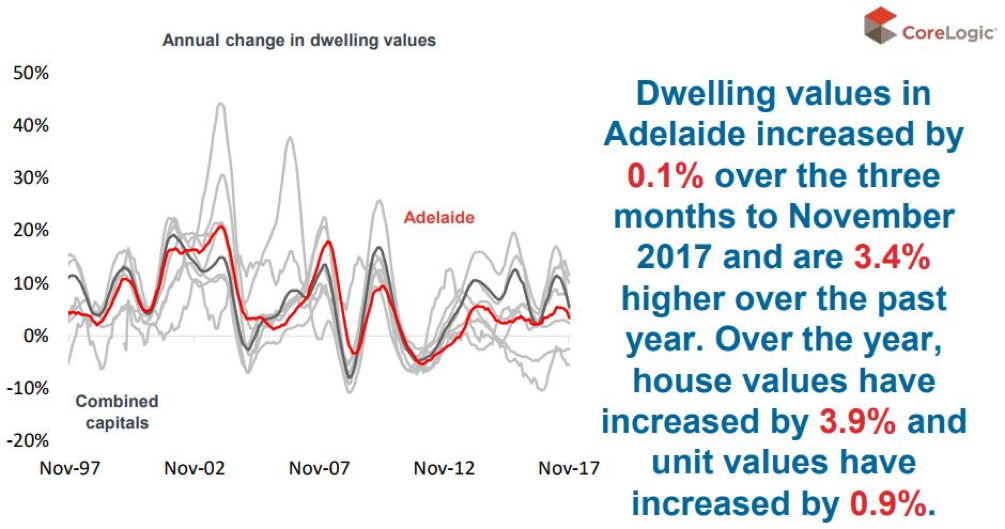 The Perth property market has yet to bottom, with prices falling 2.6% over the last year.

Sales volumes are down and buyers are still waiting for signs the market has hit ‘rock bottom’.

While the market may bottom out in 2018, it’s much too early for a countercyclical investment in the west – I can’t see prices rising significantly for a number of years.

Due to the significant oversupply of new apartments, developers are offering significant incentives to lure buyers, with discounts of up to $50,000, complementary solar panels, appliances and air-conditioning. But these buyers will not experience capital growth for years, so these short term incentives won’t make up for the lost opportunity.

A few months ago, the WA Labor Government’s first budget had no stimulatory measures for the property market – instead there was a 4% foreign buyer duty announced. 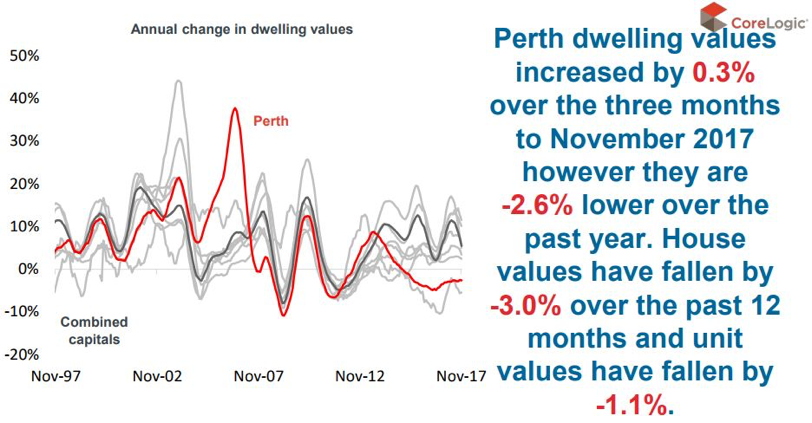 Australia’s most affordable capital city, Hobart, delivered the highest capital growth over the last year (11.5%), allowing some property pundits to say ‘I told you so!’.

This was supported by an upswing in the Apple Isle’s economy spurred by tourism and strong retail sales. But keep in mind it is a very small market.

Learn for the past…this year’s hot spot can easily become next years not spot. Last year, some 5,200 dwellings sold in Hobart, which is just 1% of the Australian market. It also accommodates a 1% share of Australia’s annual population growth.

It is a small place and it doesn’t take much to influence it.

The local economy is picking up helped by the redevelopment of the Royal Hobart Hospital and upgrades to universities, hotels and retail precincts.

Even though some commentators are suggesting it’s a good place to invest, I don’t agree as there are few long term growth drivers and despite the current fast rate of growth, dwelling values only increased 27.3% over the last 10 years. 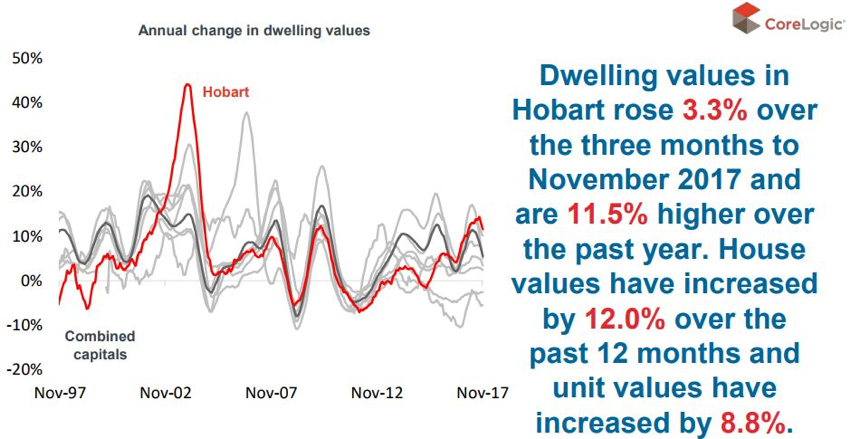 The Darwin property market is still suffering from the effects of the end of our mining boom and our research suggests house prices are likely to keep falling for much of this year.

As opposed to the east coast capital cities where many jobs are being created, Darwin had a net increase of only 153 jobs last year, showing how its economy is languishing. 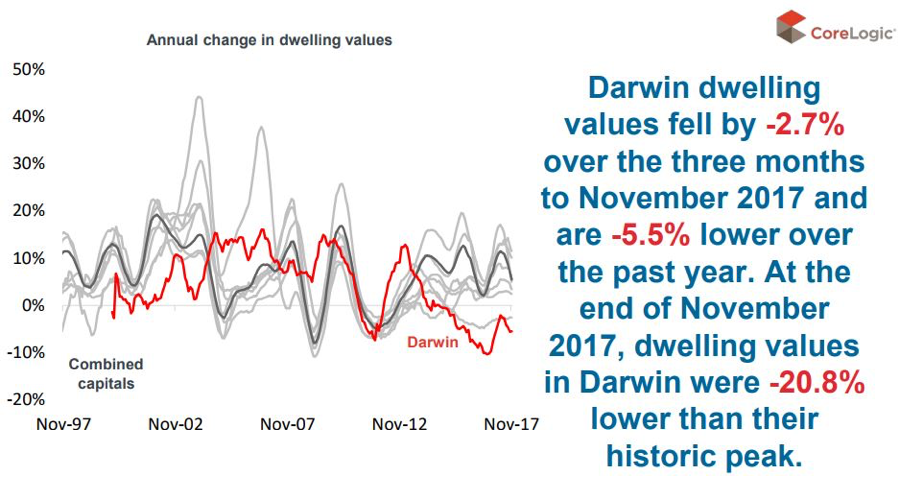 Canberra’s property market is a quiet achiever having performed well over the last year.

But it is also a two-tier market, with detached home prices rising 6.8% and an oversupply of apartments holding back unit growth (2.9%).

Canberra’s strong economy and above average population growth should underpin it’s property markets over the next few years.

The ACT government predicts ongoing strong population growth of 6% in Canberra by 2020. Around 60% of this growth will be due to natural increase and about 40% through net overseas and interstate migration.

Having said that, I don’t consider Canberra a good place to invest as their horrendous land tax rates chew into your cashflow more than anywhere else in Australia 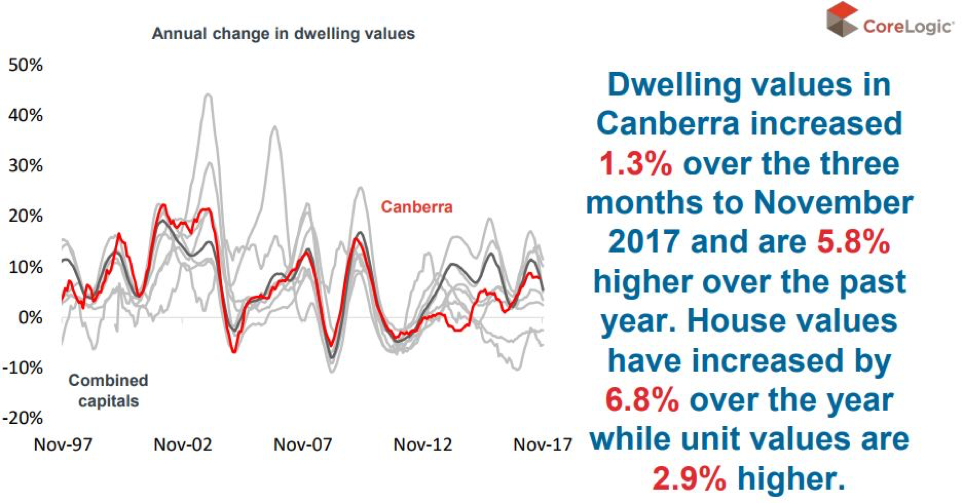 We’ve now moved into the next stage of the property cycle, one of moderate growth in some regions and virtually no growth in others.

But the market needed to calm down.

The five-year boom in Melbourne and Sydney was unsustainable and continued growth would have been dangerous possibly leading to that ‘bubble’ the property pessimists have been worried about.

Although house price growth has lost momentum, there are no signs of a property bust ahead.

Instead there are a number of factors that are likely to support a soft landing for housing, with APRA and the Reserve Bank of Australia having done a good job slowing down our markets yet keeping us in a very low interest rate.

On the other hand, there is likely to still be some pain in the oversupplied new and off the plan apartment markets.