Yes, you read that headline right and, no, it’s not a typo!

Global interest rates are now, rather stupendously, at their lowest level in 5,000 years.

Bank of America Merrill Lynch came to this conclusion as it compiled some very impressive research for the latest edition of its Longest Pictures report, which included more than 100 charts tracking such things as ownership of financial assets, returns, volatility and valuation since 3,000 BC.

According to news reports, chief investment strategist Michael Hartnett and his team say borrowing costs are lower than the going rate at the time of the Pharaohs of the First Dynasty of Egypt, to Napoleon and all the way through to 1929, which of course was the Great Depression. 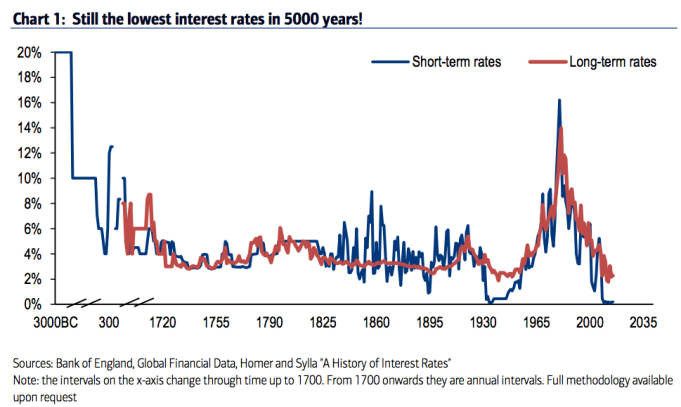 Analysts say the reasons for the historically low interest rates, post the Global Financial Crisis, are due to the combined negative effects of zero or negative interest rate policies, as well as quantitative easing (the introduction of new money into the money supply by central banks).

And it’s much the same here in Australia

Given the Australian economy held up better than most Western countries during and after the GFC (thanks to the mining boom), our interest rates have been higher than other nations, but are still historically low in our context.

Only this month the Reserve Bank lowered interest rates to 1.5% in a bid to increase growth and inflation.

It’s not just interest rates that are low

The report also indicated that the returns on commodities, such as gold, have also fallen spectacularly.

Hartnett and his team even went so far as calling commodities, banks, value stocks and cash as “today’s humiliated asset classes”.

Now this is interesting as usually in times of financial upheaval investors turn to supposedly “safer” assets such as gold and government bonds, but it appears these are no longer providing anything like average returns.

With the ongoing global financial uncertainty and the outlook still remaining tenuous, it’s important to realise that prime Australian residential property remains one of the safest investments, and also one of the few that are providing long-term and stable returns.

While interest rates are at a 5,000 year low, this helps property investors by improving their cashflow and loan serviceability.

In fact, it may well be that in today’s financial climate, property investment is more golden than gold itself.