Is it time to ditch stamp duty?

Australia avoided a recession during the global financial crisis (GFC) due to a mixture of good luck and good policy.

Our proximity to Asia helped to moderate the economic downturn, while economic reforms implemented over the last few decades acted as a shock absorber to reduce their impact upon Australia.

Now, in the midst of another global recession, even if the Australian government successfully navigates the COVID-19 pandemic, a serious challenge remains for the economy.

With productivity growth expected to remain muted, it becomes increasingly important for policymakers to strive for reforms to economic institutions. And the tax system should be top of the list.

It is commonly agreed that property transaction taxes are highly inefficient. This was outlined in The Henry Review, which was commissioned by the government in 2008 and intended to guide Australia’s tax system reforms over the next 10 to 20 years.

Property transaction taxes, incurred when a house is sold and more commonly known as stamp duty, are an important source of state government revenue.

Our research examines the cost and benefit of replacing stamp duty with either a recurrent property tax based on the value of the home or with an increase in consumption tax.

We’ve then analysed how Australians could be affected by these reforms.

Taxes like this also present a barrier for homeowners wanting to move when a residence no longer suits their needs, such as when a family outgrows their first family home.

Then there’s mobility. Reduced mobility can have ramifications beyond the housing market. For example, it may be difficult for people to accept better jobs that are located too far from their current residence.

Stamp duty also increases the down payment required to purchase a home, making it more difficult for young households to enter the property market.

Over time, as house prices have increased the burden of stamp duty has become larger, and these problems have become more severe. 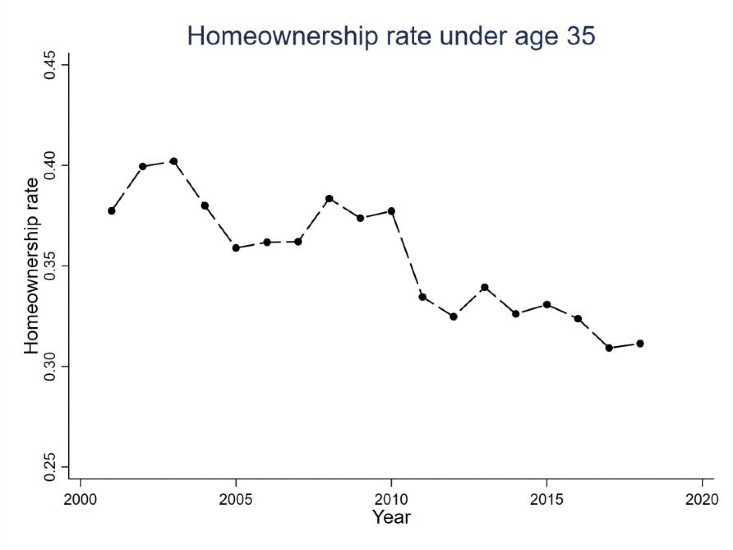 Stamp duty increases the down payment on a home, making it harder for younger people to enter the property market.

Finally, stamp duty is one of the most volatile taxes, as the revenue raised varies based on movements in the property market.

So, if the goal for state governments is to deliver a stable revenue stream, then stamp duty is not fit for modern purpose.

So, why do we still have stamp duty? The challenge of removing stamp duty is finding a viable alternative.

Although stamp duty is inefficient, removing it would realistically require either a reduction in government services or an increase in government revenue. So, state governments would eventually have to increase taxation from other sources or reduce their expenditure.

Australia already has low tax rates compared to many countries within the Organisation for Economic Co-operation and Development, so presumably, other sources of government revenue would have to be raised.

And here is the challenge for governments: even though stamp duty is highly inefficient, replacing stamp duty with an alternative tax will always be controversial as it will raise the tax burden on some people and lower it for others.

We’ve also found find that the rate of homeownership would increase, particularly among younger segments of the population who currently have difficulty in saving for an initial house deposit. Our model predicts reforming the tax system could increase the homeownership rate among individuals under the age of 35 by three to four percentage points.

There would also be an increase in the rate of current homeowners moving to new homes which allows a more efficient allocation of housing as people are more willing to move in response to their changing circumstances.

Our economic model also allows us to address welfare issues.

Young adults entering the economy would typically prefer a system with a recurrent property tax rather than a consumption tax or stamp duty.

Current homeowners would typically benefit from replacing stamp duty with consumption taxes rather than property taxes.

Why is this so? Well, over 65% of households in the Australian economy own property outright or are in the process of paying off a mortgage. For these households, moving to a property tax — which increases their tax burden — is less attractive than moving to a consumption tax.

Our economic model also suggests that the welfare effects will vary by demographic characteristics, income and homeownership.

Renters typically benefit more from the removal of stamp duty than homeowners. Houses become easier to purchase and this benefits groups that are currently excluded from homeownership by the greatest amount.

Perhaps surprisingly, we also found that older landlords will also tend to gain from the removal of stamp duty. They do so because this will in many cases increase the value of their housing portfolio, outweighing any cost associated with an increased tax burden.

This raises a challenge for governments.

In the long run, our research shows that a land or property tax is preferential to the current status quo. But it will be difficult to get broad-based support for the removal of stamp duty and its replacement with a property tax from current voters.

Some state and territory governments have already taken steps to eliminate stamp duty.

In the Australian Capital Territory, there’s a 20-year plan for the transition from stamp duty to land taxes (which are similar in many ways to a property tax). This involves the gradual elimination of stamp duty and the gradual increase of land taxes.

The New South Wales’ government has an alternative proposal. Households purchasing property in the future may be allowed to select either a recurring land tax or a one-off stamp duty levy. These are good policies that should increase the efficiency of the tax system and benefit future generations.

The gradual transition — either by increasing the length of the policy change or by allowing households to select into different tax payment systems — helps make these policies more palatable to the voting public and also provides a pathway for other state governments to follow.

The sooner, the better.

This article was first published on Pursuit. Read the original article.

Axing stamp duty could be an instrumental reform, but NSW is taking the wrong approach

“All the governments will be watching”: What does stamp duty reform mean for the economy in NSW, and beyond?

The New South Wales budget outlines proposed stamp duty changes, intended to give the economy a boost. And other state leaders are watching.