The recently revised Plan Melbourne forecasts the population of Melbourne will grow from 4.5 million to almost 8 million by 2051, with Victoria’s total population set to top 10 million in the same timeframe.

Of course this will create some interesting social and infrastructure challenges.

For example, the city’s transport network will need to cater for around 10 million more trips a day — an increase of more than 80%.

And we’ll need to create another 1.5 million jobs for the changing workforce.

As it grows, Melbourne will also need to protect its liveability and sense of community, which has earned it the rank of the world’s most liveable city for the last six years in a row.

Fortunately Plan Victoria recognises that this new housing needs to be well planned, affordable and in the right places, close to jobs and services.

However, this means up to 70% of these new dwellings will need be built in existing suburbs (up from the current projection of 65%) in an effort to create “20 minute” neighbourhoods with access to public transport and services.

And that’s where planners will be at loggerheads with the anti-development “NIMBY” groups.

You know the ones: “Yes we want our city to grow, but Not In My Back Yard!”

“The reason we need to have increased density is because a lot of the services and much of the amenity is located in our well-established suburbs,” Planning Minister Richard Wynne told Fairfax.

This means we’re in for some interesting times as groups such as Save Our Suburbs are likely to oppose the planned changes.

While densification has occurred in Melbourne’s inner suburbs, the middle ring of suburbs (those between 5km and 20km from the CBD) have seen almost no growth in density over the past 30 years due to the efforts of the NIMBY groups forcing others to the urban fringes. 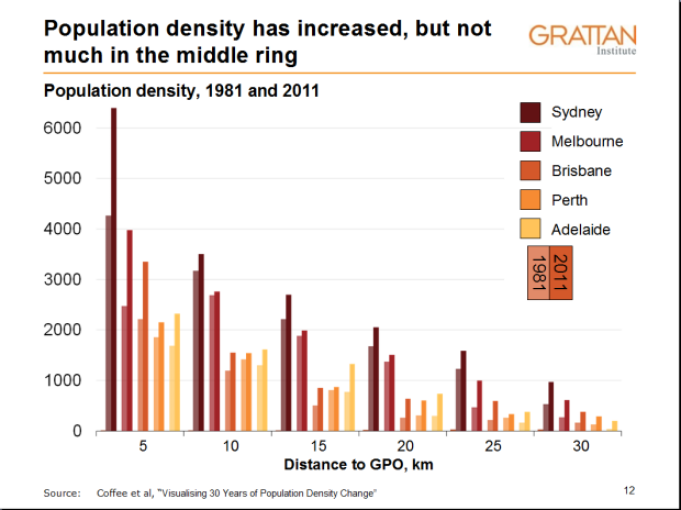 But it’s actually in these middle ring suburbs — with their amenity, desirable schools, good public transport and social infrastructure, such as parks — where our town planners hope to accommodate the bulk of our population growth.

Watch out — there’s going to be many more of those “We oppose inappropriate development” signs on the fences in Melbourne’s leafy suburbs over the next few years.