The new urban divide reminds us why location matters most

It’s happening right across this wide brown land, but more so throughout the concrete jungles of our major metropolises.

Home buyers and renters are being forced to choose between affordability and commutability, just as they must decide to maintain a career or start a family.

Life seems to be getting more complex and now, if you want a high paying job in the big smoke, you’ll either have to remain single or be part of a childless couple in order to afford accommodation convenient to your workplace.

The other alternative is to move further afield, where housing is more family friendly – both in terms of cost and space. But commuting to where the higher paying jobs are will be more difficult – in fact, almost unacceptably so.

Last year the Grattan Institute published a book that considers how cities like Melbourne and Sydney have evolved over the last decade.

City Limits: Why Australia’s Cities are Broken and How we Can Fix Them, reveals that while employment growth has been concentrated in and around our major CBDs, the opportunity to find affordable inner city accommodation is slipping away and we are seeing increased population growth in Australia’s outer suburbs. 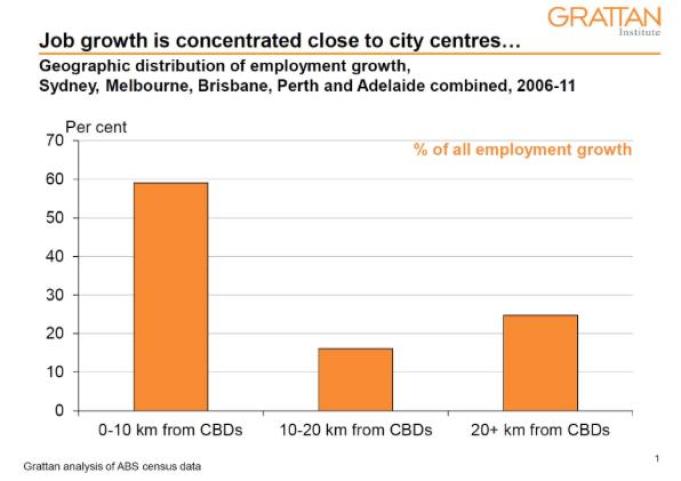 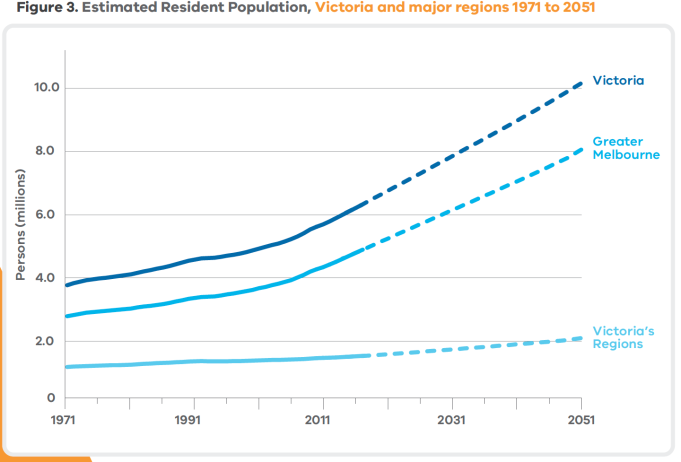 As is evident from the above graphs, close to 60% of all national jobs growth is happening less than 10 kilometres from city centres.

However, a lack of developable land across inner urban precincts is pushing over 50% of people to live further than 20 kilometres out from the CBDs.

In turn, more workers are being forced to endure 20% longer commute times in the family sedan than was the case 10 years ago, and the proportion of people spending over 10 hours a week in transit has increased by around half.

Co-author of the report Paul Donegan, says the housing market hasn’t adapted to meet the increased necessity for skilled labour within our major cities.

And while Melbourne’s substantial growth in CBD apartment and outer-fringe housing construction has answered the needs of a portion of home buyers and tenants, other accommodation requirements are being overlooked.

According to Donegan, a large market exists for affordable terrace and townhouse style dwellings around the inner and middle suburban ring, which might enable people to both raise a family and have a successful career.

“The city is not offering the opportunity to make those choices. As a result, people are increasingly only able to buy or rent far from the city centre, far from where jobs are being created.”

Financially, those who work within 10 kilometres of our five major cities are over $20,000 a year better off than their counterparts who are working 20 kilometres or further from the CBD, with the former earning an average $77,000 per annum and the latter just $56,000.

Then there are the employment prospects (or lack thereof).

If ‘outer fringe’ Melbournians think they have it tough, imagine how Sydneysiders feel about the impossible task of finding somewhere to live that doesn’t break the bank, or require a 10-hour trek to the office!

Okay, so it’s not as bad as all that just yet.

But the City Limits report indicates that in the outer west and southwest of the Harbour city, women are being progressively pushed out of the workforce.

It claims families are having to choose kids or career, with female employment participation in some areas trending at more than 20% below men.

According to the Grattan Institute report, the onus to address these issues falls squarely in the lap of government, given it’s largely planning hitches and red tape that restricts the construction of more affordable, family friendly housing.

Genuine concerns around whether essential services can be sustained in some of Sydney’s million-dollar-plus, inner city precincts are also weighing heavily.

The simple fact is the professionals we rely on every day, such as teachers, nurses and police officers, just can’t afford to live near their workplaces when they happen to be located in a luxury postcode.

So do we potentially face some kind of tipping point?

Will we arrive at a place that forces town planners to explore different development possibilities and challenge the current legislative barriers to future housing progress?

The lesson about land

We can look at this recently documented trend and think it tells us that demand seems stronger in the outer suburbs right now, so that’s where investors should look to acquire property.

But that’s not right.

The take home message here is that our major cities are fast becoming the juggernaut, powerhouse centres of our overall economy. They are not going anywhere in a hurry.

Nor is the growing demand to establish industry and trade, or to work, live and play in their midst.

But the fact remains, there’s not a lot of land left to build on.

This symbiotic, supply and demand relationship that drives our property markets will consistently remain in play around inner city areas.

People will always want to live near employment opportunities, and commerce will always continue to concentrate in centres that have the necessary infrastructure and amenities.

The same cannot be said for the outer suburbs where employment and economic conditions are not quite so buoyant and don’t offer the same level of long-term viability, as is the case with many remote areas and outer urban precincts.

When it comes to capital growth prospects, the notion that ‘not all land is created equal’ has been proven time and time again.

You can read more about why inner city land is most definitely a smart property investment choice in this Property Update article.

Over the long haul, suburbs reasonably close to the CBD where most people want to live in order to be close to work, yet where developable land is in scarce supply, will continue to increase in value faster than those further out, where land is plentiful.

It was ever thus, get over it. BUT what’s different is everyone TELLING themselves it’s different – and paying 5X average to live in cramped, dirty, noisy suburbs with high traffic, high lead and high crime rates close to city centres and telling each other how clever they are, and then taking as many minutes to get to work as those who live in much better conditions further out. More fool them…..