Nine property predictions for the next 10 years

A lot happened in the Australian property market over the past 10 years.

And having now invested in property for over 40 years, I can confidently say we can look forward to another challenging decade ahead.

Last week I wrote the second in a series of three articles on the biggest changes in property over the last decade and today I’m going to look at what’s likely to occur in the next 10 years.

The reason behind this series of articles is that the 10th anniversary edition my first book How to Grow a Multi-Million Dollar Portfolio in your spare time has just been published so it seems appropriate to look back as well as looking forward.

What’s ahead for property over the next 10 years

While we can learn from what occurred in the past, it’s not necessarily a barometer of what’s going to happen in the future, and remembering, of course, that forecasting can never be fool-proof here are some thoughts:

We are in for a period of lower capital growth across the nation because of lower economic growth, lower inflation, lower interest rates and lower wages growth. This doesn’t really concern me, as it potentially means we’re less likely to experience significant booms or busts. And of course strategic property investors can make money at any time in the property cycle through careful property selection and then “manufacturing” capital growth through renovations or development.

Ten years ago you would be happy having a home loan with an interest rate below 10%. In the last decade interest rates have halved making properties more affordable. Ten years ago your mortgage repayments on a $500,000 property may have been around $50,000 a year. Today your mortgage on a $1 million-dollar property would also be around $50,000 a year.

3. The growth of our service industries 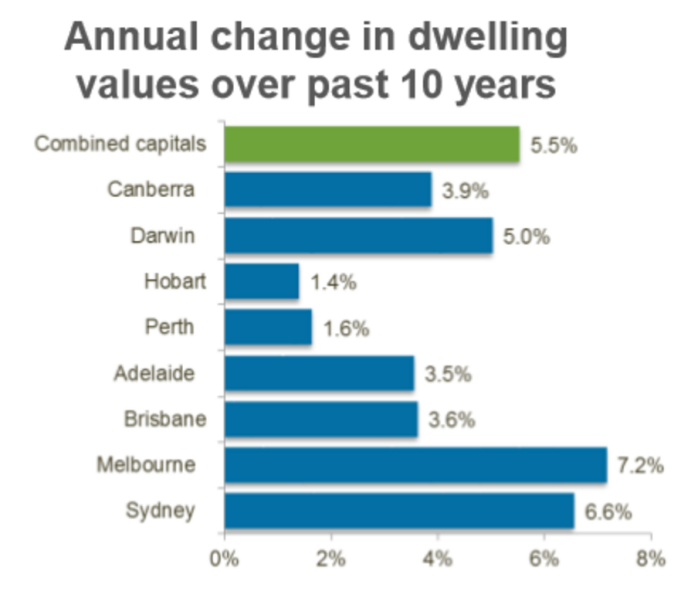 As Australia’s economy will be driven by our service industries in the future, property price growth will occur where the new jobs are being created and where wages will rise above the average growth.

This is likely to occur in our big capital cities.

More specifically, it is likely the gap between Melbourne and Sydney and the other capital cities, as well as regional areas, will only widen over the next decade but this growth is likely to come a multitude of problems.

How prepared are our cities to cope with populations of more than five million people – the point at which some cities tend to become less “liveable”?

With our cities becoming even more populous and congested, more people will live in apartments and townhouses.

This will be in part because of our ageing population and more one- or two-people households, and partly because of affordability and limited supply of land available for anything other than medium-density developments.

As demand for property increases, specifically in Sydney and Melbourne, than prices will continue to grow and, just like in Manhattan, our major metropolises will likely be out of financial reach for the average first homebuyer.

6. A bust in the inner-city apartment market

There has been plenty written about the massive spike in apartment building in many of our capital cities in recent years.

Like in every other past property boom, property developers got ahead of themselves and we will be left with a massive oversupply of apartments, particularly in the CBDs of Melbourne, Brisbane, Perth and Sydney.

While many of the new projects have been underwritten by foreign investors purchasing off the plan, many of these will now have difficulty settling as banks have changed their lending criteria, and I can see a tsunami of defaults ahead of us.

This could lead to up to a decade of no price growth or rental growth in some of the large apartment towers currently being built.

In the first half of the last decade we experienced significant population growth to help service our mining boom.

Now Australia’s population is forecast to grow at a slightly lower 1.5% annually, which might not seem like much, but will result in the population of our big four cities in turn increasing 15% over the next decade.

Such a large increase in population will likely put undue strain on infrastructure, particularly transport, and eventually push up prices of inner city real estate.

8. There will be more “white noise”

Over the next decade the majority of market news you will read will not only be useless, but also harmful to your financial health.

9. There will always be an “X factor”

Despite all the best economic research and forecasts, every year there will be an “X factor” when an unforeseen event or situation blows all their carefully laid forecasts away.

Of course the X factor can be negative (the aftermath of the Global Financial Crisis of 2008) or positive (the China driven resources boom of 2010-12) and it can be local or from abroad (the US subprime mortgage crisis of 2008).

Over the past two weeks, I’ve looked back on what the property market was like in 2006 as well as considered what has changed between then and now.

I hope you’ve learned from my reflections on the past 10 years of property and I hope you’re as intrigued, and as excited, as I am about the property investment opportunities in the decade ahead.

Your optimism in assumptions is alarming. Perhaps more realism would Leven your comments. We live in a whole world not just Australia. In the short term we can still live on the inflated position our development boom provided, now we must settle down to the new “this is reality”. With a view to the pendulum method, I suggest it has now past the zenith started to swing toward the bottom of the cycle. The recalcitrance of the Left wing in Parliment will hurt us over the coming 2 years plus, with the Libs being a convenient sop for the upcoming ills, left to us by the previous Labor government. Prices will decline, Christmas will be sad for many.