Could we really have double-digit property growth again next year?

Now these are not the predictions of a property spruiker, but those of leading analyst SQM Research’s Louis Christopher in his latest Housing Boom and Bust Report.

With a credible track history behind him, it’s definitely worth looking into the assumptions underpinning Christopher’s forecasts.

Christopher believes wealthy home owners will drive the growth in sectors of the Sydney and Melbourne housing markets next year, but the level of house price growth will depend on what the RBA does to interest rates. 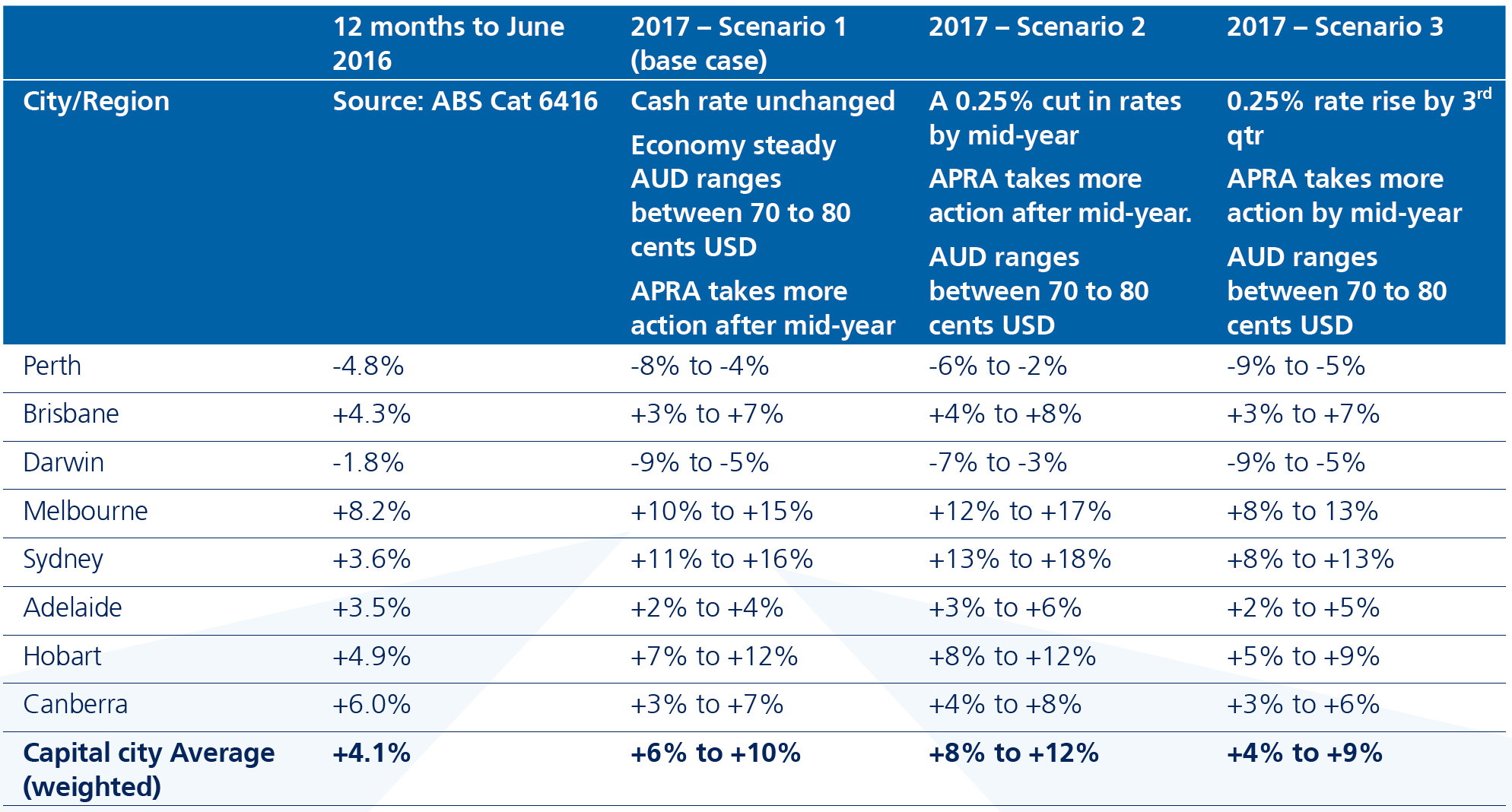 As you can see from the figures above, Christopher forecasts a mixed outlook for our various property markets, with other capital cities not forecast to enjoy the same price growth as Sydney and Melbourne, which are being driven by the fastest growing economies.

Brisbane, Adelaide, Canberra and Hobart’s house prices are forecast to grow a little better next year than they did this year, however Christopher expects house prices to fall further in Perth and Darwin.

But as usual, even the Sydney and Melbourne property markets are fragmented.

House prices in Sydney’s east and lower north shore (+ 15% so far this year) are outperforming the outer ring suburbs.

And while the entire Melbourne market is booming (houses that is – not off-the-plan apartments), the inner east (+27% in the last 12 months) is stronger than the middle and outer ring suburbs (+14% and 8% respectively.)

But it’s not all good news

SQM Research forecasts an oversupply of new residential property led by Brisbane, Sydney and to a lesser extent, Melbourne, which will keep rental growth down in 2018.

Melbourne will record a 29% increase in completions of new apartments in 2016, while Sydney is on track to build 33% more apartments this year, with rises over the next two years likely to create a moderate oversupply.

However, SQM Research believes that Brisbane is already in oversupply having completed 12,000 free standing dwellings this year, making for a surplus of 8,000 dwellings in 2016.

Are prices too high?

Yes they are according to Christopher, who warns our housing markets are overvalued.

“The national housing market overall it is overvalued. Whether one considers rental yields, housing prices to wages, housing price to nominal GDP – they all paint the same picture of a deeply overvalued market.”

Christopher believes this has occurred because of a combination of factors, including population growth, long-term supply restrictions and, most importantly, easier and cheaper access to housing credit (mortgages).

Yet he sees our property prices rising further in 2017 because at present, the housing market is able to service higher housing debt because of our low interest rate environment.

However, Christopher warns the RBA needs to take action “sooner rather than later” in order to cool off the housing market before a potential bust in 2018.

“In my opinion, the RBA will need the Australian Prudential Regulation Authority (APRA) to rein in credit lending once again, or lift interest rates, or do both, and they need to take action sooner rather than later,” he says.

“Affluent areas tend to be driven by the prosperity of local economy. And right now, both Sydney and Melbourne have the fastest growing economies in the nation.

“APRA’s actions last year to rein in housing investment credit growth worked. [But] tapping on APRA’s shoulders once again could be a little more complicated this time around as it will need to involve restricting owner-occupied credit growth – something which the banks will be more reluctant to mess with.”

“I would’ve thought potentially putting in additional deposit requirements to purchase a home, in a worst case scenario perhaps having to lift interest rates, might be required.”

It looks like we have some interesting times ahead!