There’s no sugar-coating it — our property markets are in a decline, with property values falling around the country.

But it’s nowhere near as bad as some pessimistic media commentators are suggesting.

According to CoreLogic, overall property values only nudged 0.1% lower in April but, since this is the seventh consecutive month-on-month fall since values started retreating in October last year, we’re starting to see clickbait headlines reporting our faltering markets.

Of course, there are multiple markets, each at their own stage of the property cycle, and these declines are concentrated in the largest capitals, while regional dwelling values edged 0.4% higher last month.

To get a better understating of what’s going on in the market and what’s likely to happen to property values over the year, let’s unpack this month’s CoreLogic chart pack.

Capital city dwelling values were 0.3% lower over the month of April, driven by falls of -0.4% in both Sydney and Melbourne and a smaller decline in Brisbane values (-0.1%).

This type of price drop is nothing to write home about, especially considering these falls were offset by flat conditions in Perth and minor rises in Adelaide (+0.1%), Darwin and Canberra (both +0.6%), and Hobart property values rose 1.2% in April.

Despite the slowing conditions all capital cities except for Sydney, Perth and Darwin have recorded value rises over the year. 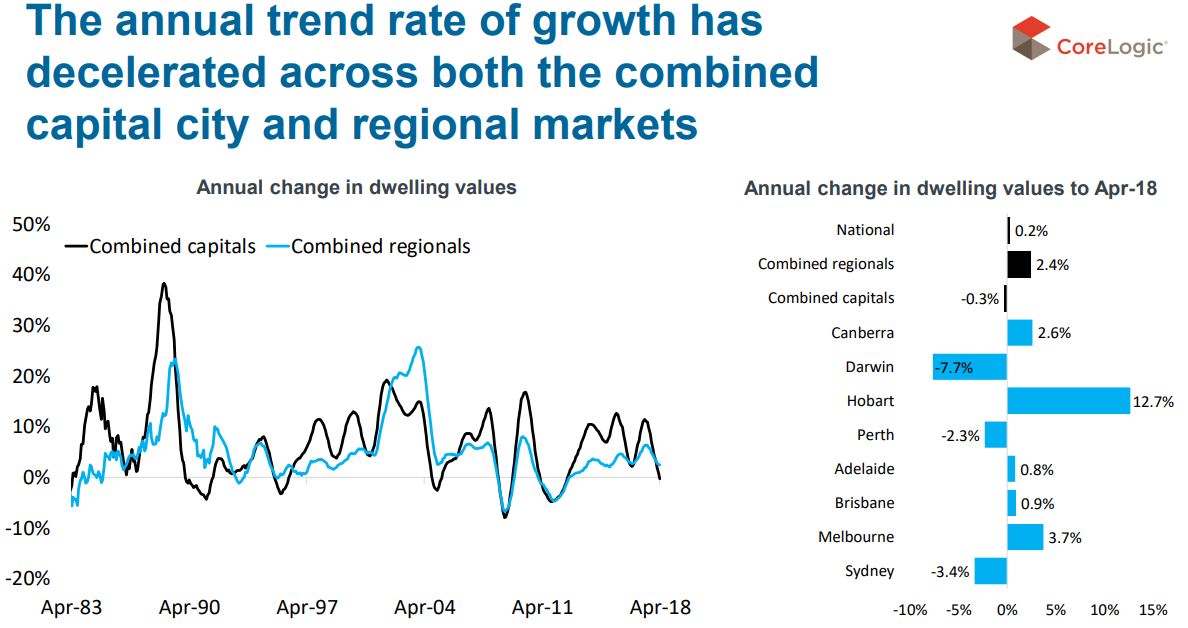 The upper end of the market is suffering

As usually happens when the market turns, the higher end of the property market suffers more.

This is really an area of discretionary spending.

Maybe you don’t need to upgrade your $5 million home to that $7 million mansion at the moment.

In due course the cheaper, more affordable areas will also suffer, but as you can see from the graph below, those properties at and above the median price (other than those in the top two deciles) are still growing in value.

There’s an interesting lesson in these stats.

Properties that cost more than the median price, those that are still increasing in value, tend to be bought by homebuyers who are securely employed and well paid, while there are fewer growth drivers for properties in blue collar locations, where wages are hardly going up, thereby causing affordability constraints. 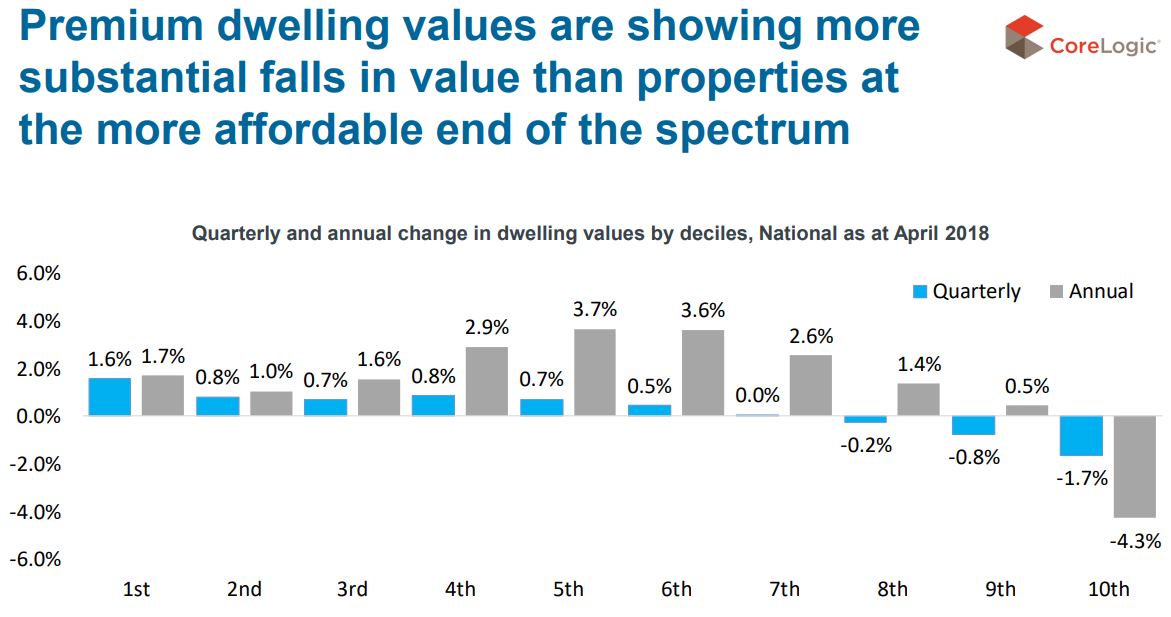 The Sydney property market is experiencing a soft landing but remains fragmented.

Some of the positive long-term influences for Sydney property include:

“Of course when you talk about ‘the Sydney property market’ you really have to take into account that it is not a uniform real estate market – some areas will vastly outperform others.

“With 40% of our overseas migrants settling in New South Wales (particularly in Sydney) and Sydney punching above its weight in jobs creation, property price growth will be more consistent in areas closer to the CBD, while growth in regional areas is likely to fall behind due to fewer growth drivers.

“However, critical property selection will be more important than ever now. You won’t be able to count on the market doing the heavy lifting anymore.” 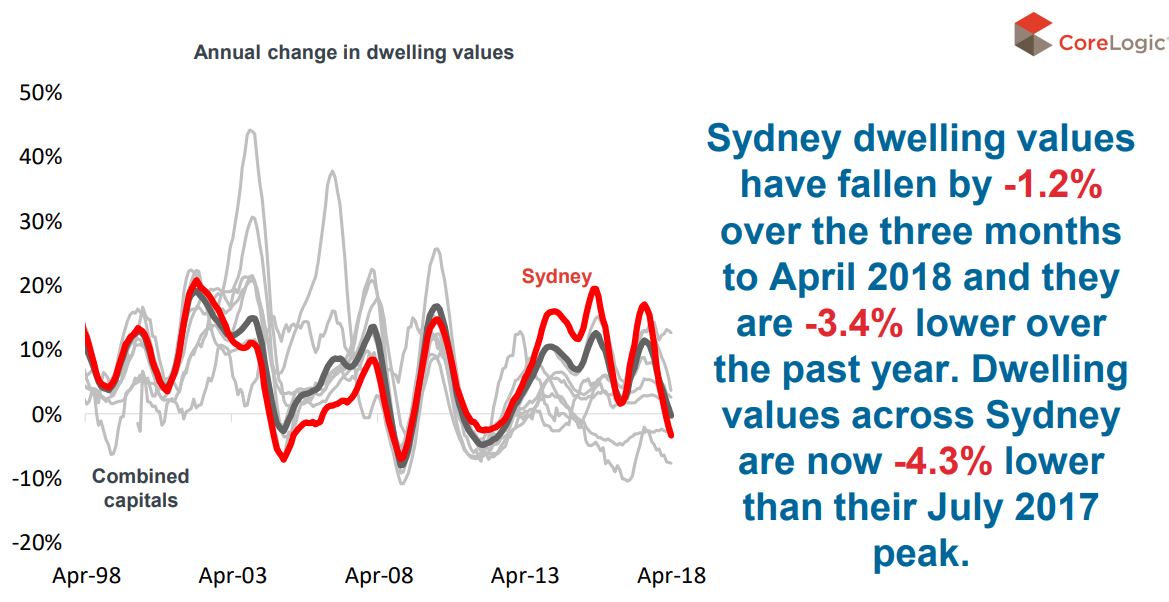 While Melbourne’s property prices are likely to fall by around 3% this year, they will be underpinned by its strong population growth and the influx of 35% of all overseas migrants.

Melbourne now rates as one of the 10 fastest growing large cities in the developed world, with its population likely to increase by around 10% in the next four years.

Similarly, some regional centres including Geelong have performed well, but moving forward it is likely that the more affluent middle rings suburbs, which are going through gentrification, are likely to exhibit the best property price growth.

As Melbourne residents trade their backyards for balconies and courtyards, villa units with renovation potential and townhouses will make the best investments. 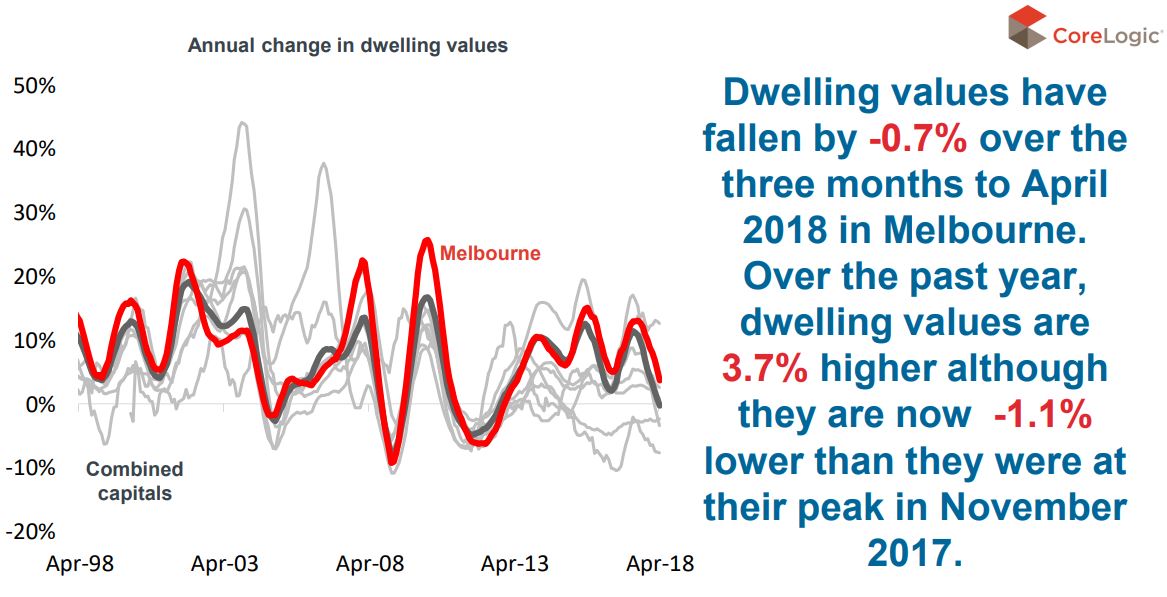 There are good times ahead for Brisbane property.

According to Brett Warren, director of Metropole Property Strategists in Brisbane, some of the positive influences on the Brisbane property market include:

While Brisbane property prices are considerably more affordable than the other two east coast capital cities, CoreLogic forecasts that one in 10 houses sold in Brisbane will fetch more than $1 million within two years.

Local affordability and the lifestyle advantages have resulted in strong interstate migration (+17,426 last year, up 50.5% from the previous year). At the same time 12.7% of our overseas migrants are settling in Queensland and interest from foreign investors is rising. 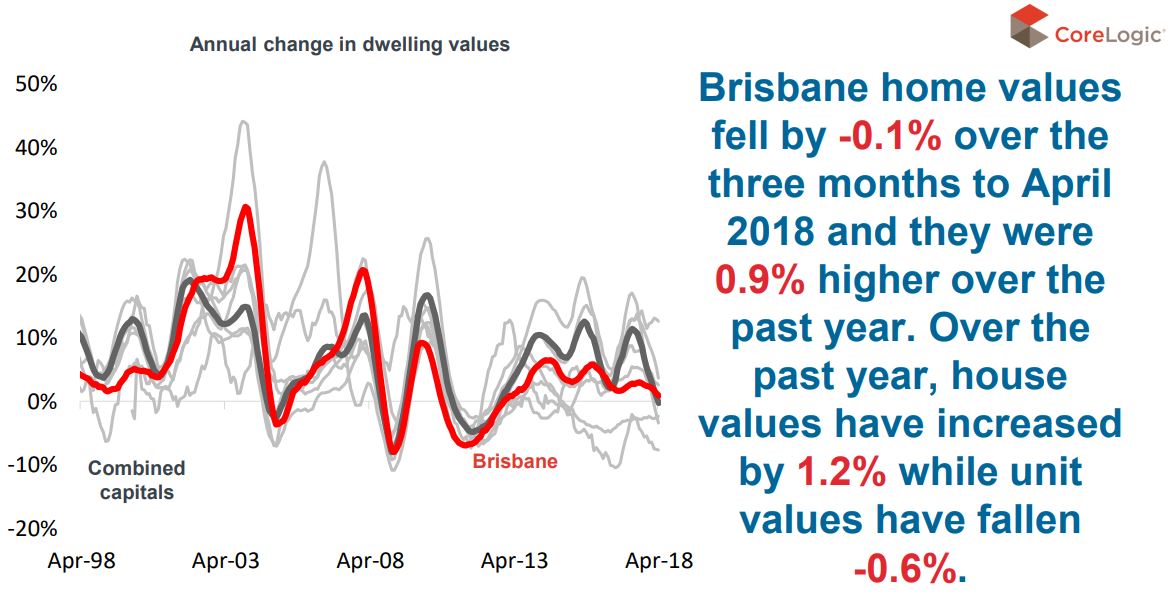 Adelaide home prices started to slip backwards over the last quarter and overall home values are up only 0.8% over the last 12 months.

I know some investors are looking for opportunities in Adelaide, hoping (really “speculating”) prices will increase, but there are few growth drivers in Adelaide, which is experiencing about average unemployment rates and poor employment growth. 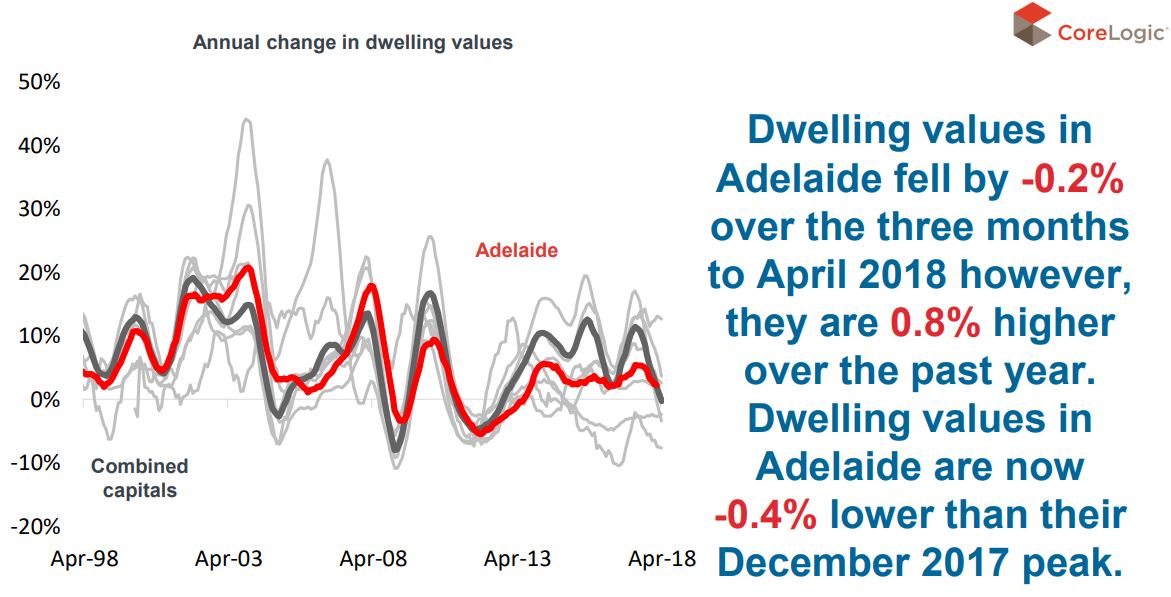 The Perth property market peaked in June 2014 and has yet to bottom, with prices falling a further 2.3% over the last year.

While the market may bottom out later in 2018, it’s much too early for a countercyclical investment in the west – I can’t see prices rising significantly for a number of years.

Like the other states, Western Australia’s population trend has a significant impact on the overall performance of the property market.

To get people back into the state, more jobs will need to be created and consumer confidence will need to return. 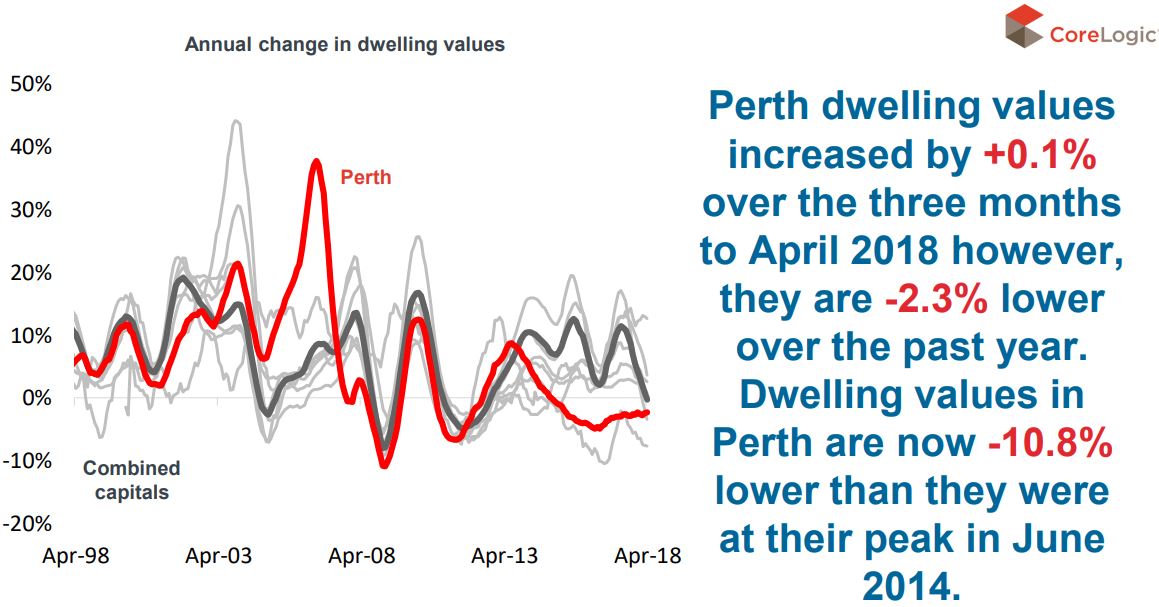 Australia’s most affordable capital city, Hobart, delivered the highest capital growth over the last year (+12.7%.), but this was mainly driven by investor speculation.

I see Hobart property performing very well again throughout 2018 as investors chase the “next hotspot”, but keep in mind it is a very small market, so learn from the past — this year’s hotspot can easily become next year’s “not spot”.

Hobart accounts for around 1% of the Australian property market. It is a small city and it doesn’t take much to influence it – in both directions.

Despite the current fast rate of growth, dwelling values in the Apple Isle have barely kept up with inflation over the last decade, and with few long-term growth drivers, I would avoid investing in Hobart. 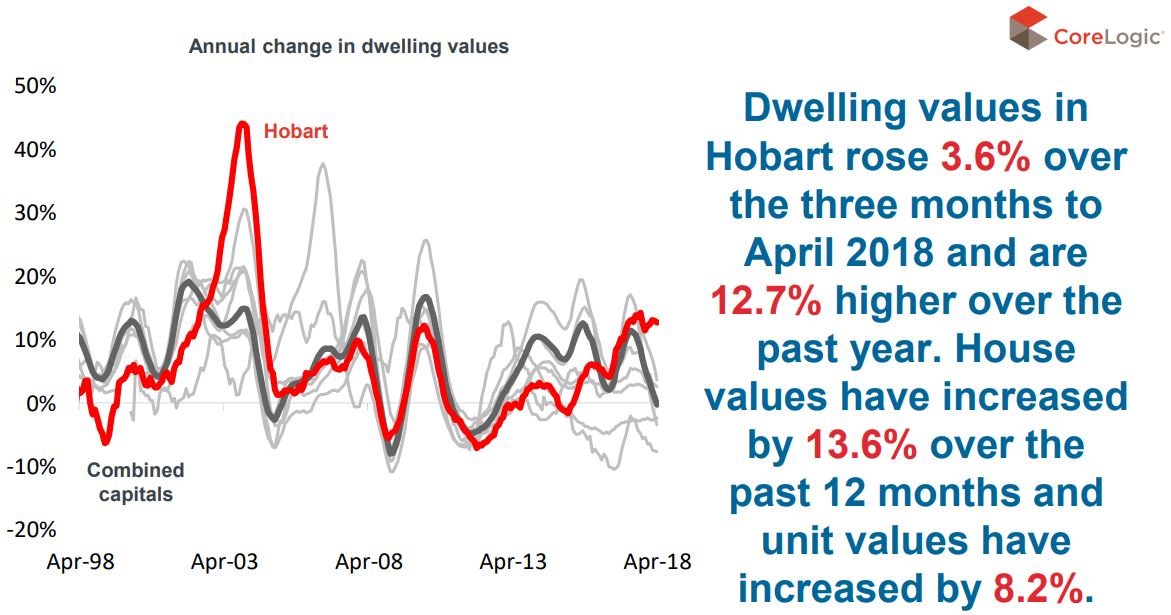 According to Kate Forbes, national director of Property Strategy at Metropole, there are few growth drivers for Darwin, where dwelling prices are 21.1% below their peak of January 2013.

In the past year alone dwelling values have declined 7.7%.

“Poor growth and employment prospects have meant that Darwin hasn’t benefited from either internal or international migration and this lacklustre population growth (zero in fact) is unlikely to change soon,” said Forbes.

“Darwin does have the best yields in Australia (houses 5.6% and units 6.3%). Unfortunately, this is due to dwelling values falling faster than weekly rents and so on balance it wouldn’t be a location we would recommend investing in currently.” 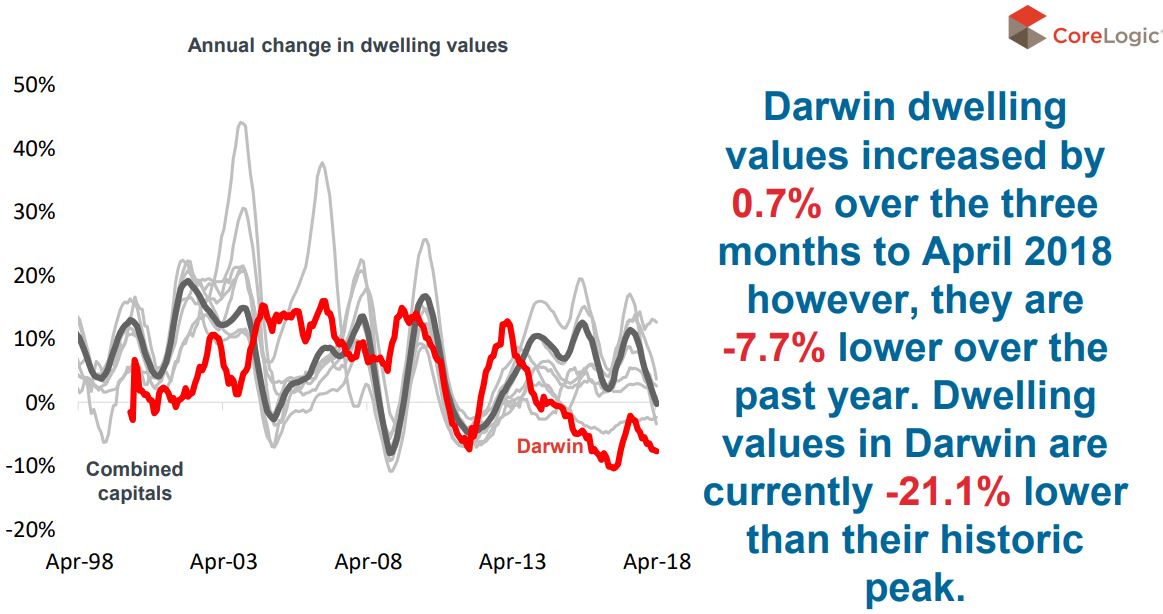 Kate Forbes reports that while Canberra’s population is relatively small, it’s growing at a rate of 1.8% (second only to Melbourne) and this, combined with strong incomes and employment, has supported the recent capital growth Canberra has experienced.

“The growth has been quite polarised though, with houses significantly outperforming units,” says Forbes.

“High land tax rates have dampened investor enthusiasm for ACT property as they eat into cashflows despite the rising rents.”

“Recently, demand has been very strong for outer northern suburbs as the ripple effect kicks in and families move there, choosing it over suburbs closer in due to value for money.” 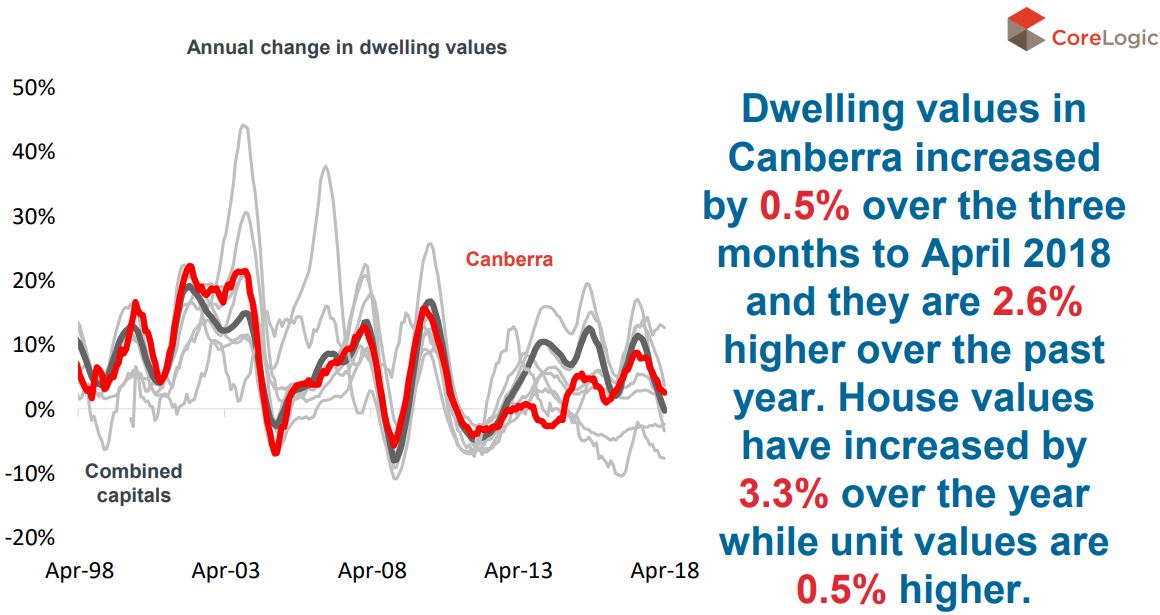 While most capital cities recorded declines in property values over the past three months, the story was different in the larger regional property markets around Australia, with dwelling values holding their own (+1.3% over the three months) other than in Western Australia.

The combined regional markets have recorded growth of +2.4% over the past year, while the combined capital cities slipped in value (-0.3%).

Of course, this doesn’t mean regional Australia is a good place for long-term investment.

I strongly recommend investing in the capital cities, where our economic growth is concentrated, as this leads to jobs growth, population growth and demand for property.

We’re clearly in the next stage of the property cycle, one of moderate growth in some regions and virtually no growth in others.

This makes it an opportune time for both homebuyers and investors to buy property at a time when they’ll face less competition.

However, correct asset selection will be more important now than ever, so only buy in areas where there are multiple growth drivers such as employment growth, population growth or major infrastructure changes. Similarly, suburbs undergoing gentrification are likely to outperform.

Source of graphs and data: CoreLogic.

Property market declining is great news for affordability. Why do you need to sugar coat that? We have one of the most over inflated markets in the world, this is brilliant news.