After a head-spinning 2015, our property markets started 2016 with a bunch of mixed predictions.

Some called a property bubble, while others forecast lower, but continuing capital growth.

Well, the scorecard is in for the first quarter of the year and our property markets slipped down a gear according to Corelogic, with an annual price growth rate of 6.4% over the last 12 months which, while being the slowest growth rate in almost 3 years, is still above Australia’s 10 year average growth rate of 5%.

At the same time individual performances remain patchy and mixed, both between our various capital city markets and market segments within them, reflecting the underlying impact of mixed-speed economies in the various states as well as local supply and demand factors. 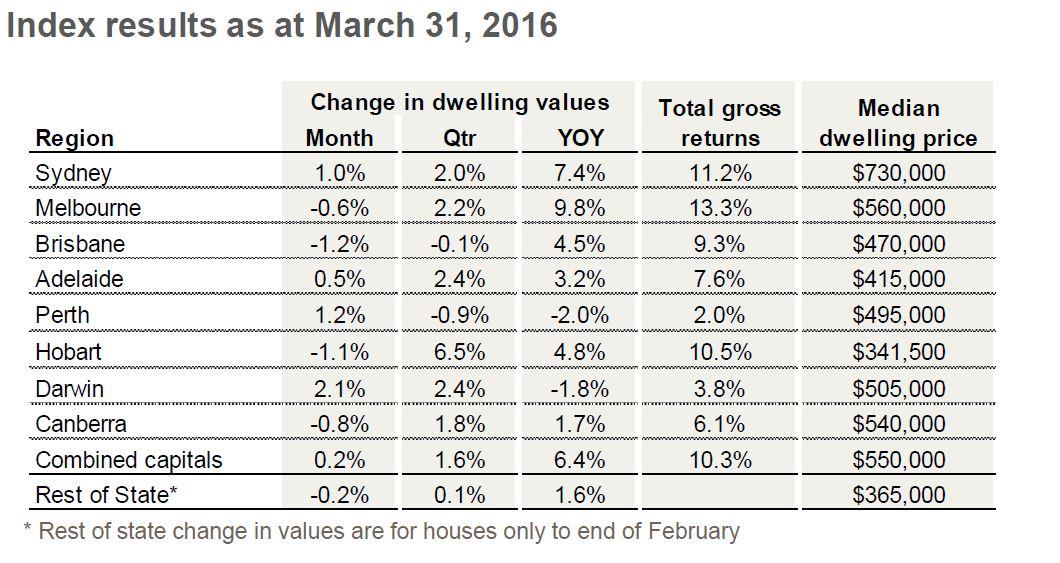 Melbourne now the leader of the pack

For the last few years it’s really been a two-horse race, with both the Sydney and Melbourne markets performing strongly and the other capital cities lagging behind as can be seen in this chart. 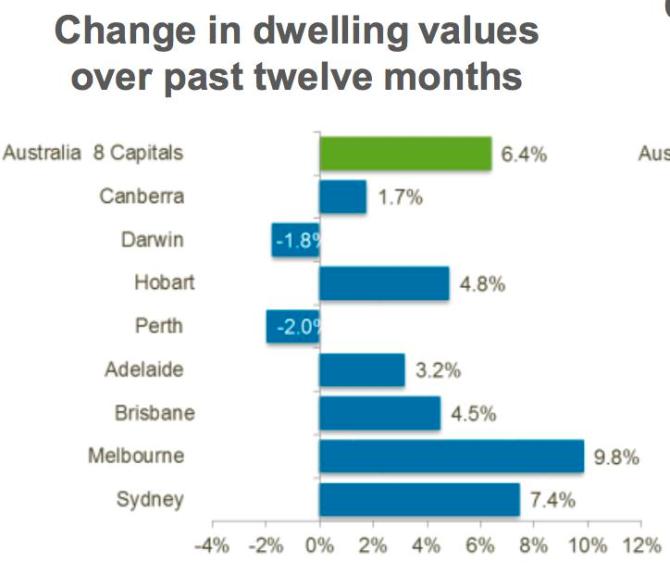 And while the conga line of overseas economists predicting doom for our property markets continued, the stats suggest we are not in bubble territory as none of our capital city markets exhibited extraordinary growth over the last 10 years. 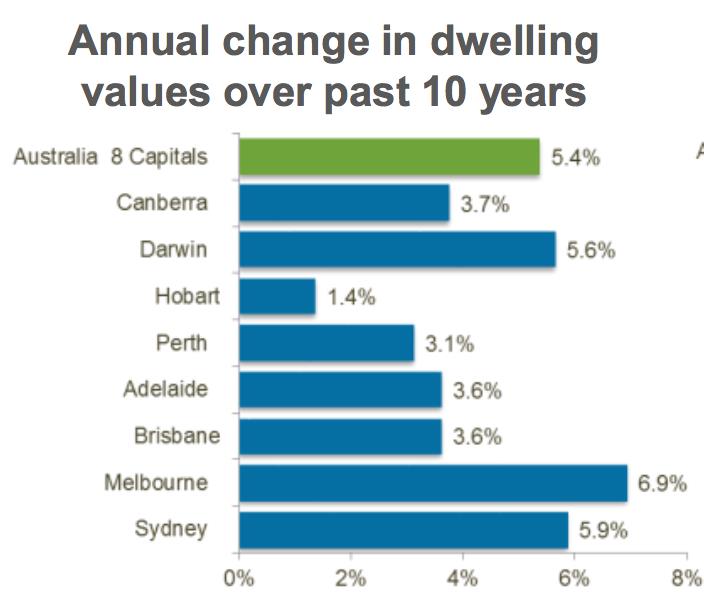 The main reasons why property values in our two big capital cities grew so strongly was the cities’ robust economic and jobs growth, as well as massive population growth with around 60% of the immigrants coming to these two cities to chase the jobs there.

At the same time, the outflow of residents from Sydney and Melbourne to other states, particularly Queensland and Western Australia, has slowed dramatically since the end of the mining boom.

Property investors chasing capital growth have also been targeting these cities, but this has now moderated.

Let’s now look at some of our major property markets in a little more detail.

The Sydney market is taking a well earned breather with house prices now falling a little in some locations. However, overall prices are up 49.2% from the previous market trough in 2012.

The fundamentals for the Harbour City property market are sound because jobs are being created there and its population continues to grow strongly.

“While the media reports that the Sydney property market has dropped a little, and that is true, the market is very fragmented with a shortage of good properties in the inner west and eastern suburbs at a time when there are still strong demand from buyers – both and investors,” says George Raptis, director of Metropole Property Strategists in Sydney.

“The current lull in the property market is creating a great opportunity for both home buyers and investors with a long term perspective, but careful property selection is critical.

“Our strong state economy, major infrastructure spending, strong population growth and low vacancy rates means that some segments of Sydney’s property market are likely to revive in the second half of 2016.

“Homebuyers are selecting more carefully now and their decisions are being driven by lifestyle with many trading backyards for balconies in well-located apartments in Sydney’s gentrifying suburbs. On the other hand, I would be very wary of buying in the outer, blue-collar suburbs where prices are likely to fall further,” says Raptis.

The Melbourne market continues to perform strongly with house prices now at record levels, up 35.7% since the previous market trough.

“While Melbourne home values have risen at the fastest pace of all the capital cities over the last 12 months, it’s really a tale of two cities in the one big capital,” said Kate Forbes, of Metropole Property Strategists in Melbourne.

“There is still a significant oversupply of new apartments in the CBD and in many of our inner suburbs plus a record number of new apartments are still coming out of the ground or on the drawing board. This will undermine capital gains and rental growth in these locations.”

“Yet there is a shortage of well located established homes and apartments in Melbourne’s middle ring suburbs with demand outpacing supply, keeping auction clearances high and prices strong,” says Forbes.

“Melbourne’s economy is strong, fuelled by lower dollar and interest rates and property prices are more affordable than in Sydney yet our incomes are comparable.

“Currently there are some good investment opportunities buying established apartments in Melbourne’s southern or eastern suburbs and adding value through renovations,” she says.

“And if your budget allows, buying a villa unit or a small house in the right suburb should deliver strong capital growth over the next few years.”

Having underperformed the combined capital city averages over the last 10 years, last year Brisbane was tipped by many as the property market to be in.

While it gathered momentum and market turnover has increased, Brisbane still underperformed Melbourne and Sydney last year. But the market is likely to exhibit similar growth to the two big capitals this year.

“Brisbane’s property markets have performed steadily, but not spectacularly, over the last few years. The lower Australian dollar and improved tourism outlook has generated jobs in the hospitality and tourism industry this in turn should lead to increased interstate migration,” says Davis.

“There has been a resurgence of property investor activity over the last six months, with interest being particularly strong in the mid-price range, inner and middle ring suburbs of Brisbane.

“Melbourne and Sydney investors are beginning to consider Brisbane where price growth has lagged the southern states. With property prices around 50% cheaper than Sydney and higher rental yields, there is still a lot of upside for Brisbane properties.

“Clearly Brisbane is not the hot spot that some projected meaning correct property selection is critical. In particular I’d be wary of inner city and near CBD apartments where an oversupply is looming. However, houses near the city will provide the best yields and strong growth potential.”

After a long period of strong capital growth, the Perth housing market has recorded a significant slowdown, being the worst performing capital city market over the last 12 months. These conditions are likely to continue with a falling population, rising unemployment, falling transaction numbers, decreasing confidence and a risk of oversupply in the Perth apartment market.

Real (inflation adjusted) property prices are 3.9% below their previous peak in June 2010. Perth also has the highest vacancy rate of any capital city.

Adelaide’s housing market has performed in a steady stable fashion, regardless of what’s happening in the wider economy.

While Adelaide had its best year in a while over the last 12 months, demand for property remains subdued with activity driven more by necessity than desire to upgrade or invest. Real (inflation adjusted) property prices are 4.4% below their previous peak in June 2010.

The Adelaide market is insulated from the Australian Prudential Regulation Authority-related lending crackdown as it is being supported a higher proportion of owner-occupiers than investors, but there is a potential of oversupply due to ongoing construction.

The Darwin property market performed strongly a few years ago, driven by solid investor sentiment, but their love affair with the Northern Territory is long over.

Prices are still falling, but at a slower rate and they’re likely to keep falling for much of this year. I’ve always found investor-driven markets more volatile than our big capital cities and that’s why I avoid them.

Real (inflation adjusted) property prices in Darwin are 11% below their previous peak in March 2011.

Hobart was the best performing capital city over the last quarter (+6.5%) but it is really only playing catch up, as real (inflation adjusted) property prices are 7.5% below their previous peak (June 2010.)

Without a big economic shift to boost employment and sentiment in the city, there is little to suggest things will change in the long-term.

However, in the short term, rents are likely to rise because of Hobart’s very low vacancy rate.

The Canberra market is likely to have difficult year in 2016 with the political uncertainty surrounding the upcoming election affecting it’s housing markets.

The Canberra inner-city apartment market is still subject to oversupply and this is causing a weakness in overall unit prices.

Future property price growth will, as usual, depend upon economic growth and local market factors.

The key growth drivers will be:

Of course, the economy will keep putting stumbling blocks in front of us and it won’t be all smooth sailing – but it never is.

However, by the end of the year Melbourne is likely to be the strongest performing property market, followed closely by Brisbane with Sydney taking up third place.

The bottom line is … you can’t just buy any property.

It’s a myth that property values double every seven to 10 years.

While they say a “rising tide lifts all ships” clearly there are some property markets and certain properties that have had minimal growth over the last few years, while others have enjoyed massive growth.

While the overall property market is comfortable, it’s a bit like me putting my left hand in a bucket of cold water and my right hand in the bucket of hot water and saying overall I feel comfortable.

Some segments of the property market are hot and others are cold and the fragmentation of these markets is unlikely to change over the next year or so.

This means home buyers and investors will have to undertake careful due diligence and make sure they buy the right type of property.

Look for property that has a level of scarcity, meaning it will be in continuous strong demand by owner occupiers (to keep pushing up its value) and tenants (to help subsidise your mortgage); in the right location (one that has outperformed the long term averages); at the right time in the property cycle; and for the right price.