State by state: An update on Australia’s housing markets

Who’s right about the property markets — the optimists or the pessimists?

The media seems so preoccupied with what’s going wrong in Australia, they’re missing all the things that are going right.

The newspapers and online media outlets continually deliver house price collapse headlines, probably because it gets clicks, but our property markets are not collapsing and our economy is not heading for a recession.

The economy is chugging along nicely and our property markets are experiencing a soft landing.

Of course, the media’s negative sentiment could end up becoming a self-fulfilling prophecy, scaring off potential home buyers and reducing demand making the market downturn worse than it needs to be. 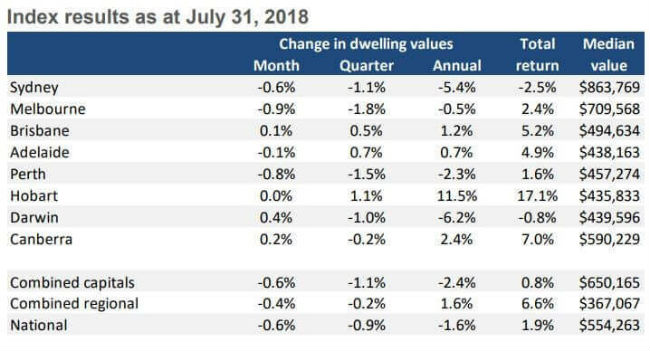 As you can see, some locations are still hot, and others are not. 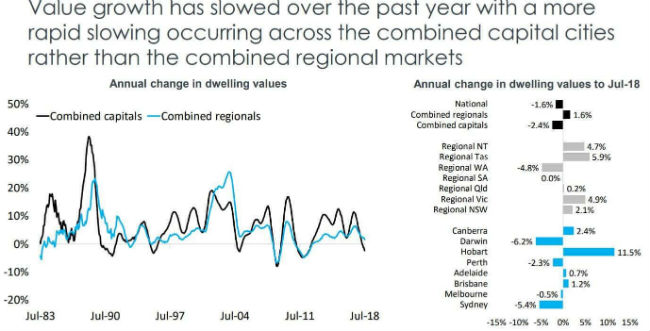 The upper end of the market is suffering most

As is normally the case at this stage of the cycle, more expensive properties, which are more subject to discretionary spending, are the weakest segment of the market.

And not surprisingly, this is more evident in Sydney and Melbourne, while most other cities have seen relatively little difference in the performance of properties across the broad valuation spectrums. 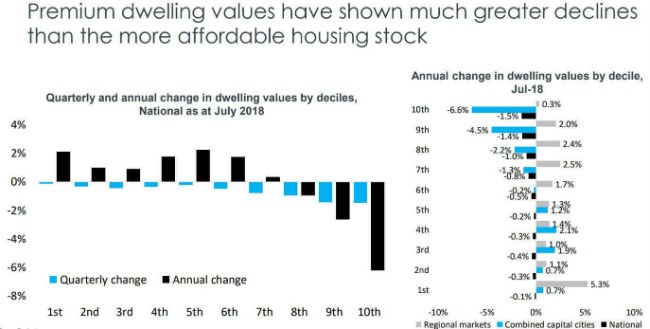 As always, there are substantial differences in the housing markets performance across each of the capital cities.

The Sydney property market peaked a year ago — in July 2017 — and is now experiencing a soft landing, with dwelling values falling by -5.4% over the last year.

While the top end of the market is suffering from a lack of buyers for prestige home and the lower-end markets like Sydney’s south-west or the Central Coast are being held back by affordability issues, some of the inner and middle-ring suburbs are strongly outperforming the averages.

While Sydney is the most expensive city in Australia, it is also clearly the most valuable and will continue to experience a chronic shortage of homes.

Strong economic growth and jobs creation is leading to population growth and ongoing demand for property in Sydney. Underlying demand is well ahead of supply and the rental market is tightening. At the same time international interest from tourists, migrants and investors continues.

However, now more than ever, critical property selection will be more important to find an investment grade property that will outperform the property markets.

The Melbourne property market peaked in November 2017, and dwelling values fell by 1.8% over the last year.

Even though it is taking a breather after five years of exceptional growth, there is no sign of a collapse in sight.

The most affordable quarter of the Melbourne market is still performing strongly with house prices rising by 9.3% over the past year, while the most expensive quarter of the market has recorded a fall of 2.5%.

While Melbourne’s property prices are likely to fall a little more — maybe a further 3% this year — they will be underpinned by a robust economy, jobs growth (about 72,000 jobs were created last year), Australia’s strongest population growth and the influx of 35% of all overseas migrants.

Melbourne now rates as one of the 10 fastest growing large cities in the developed world, with its population likely to increase by about 10% in the next four years.

While the national population grew by 1.6% in the year ending 30 June 2017, the highest growth was in Victoria, with a 2.3% increase in population. Experts have predicted Melbourne is likely to surpass Sydney as the largest city in Australia by as early as 2031.

Similarly, some regional centres including Geelong have performed well, but moving forward it is likely that the more affluent middle-ring suburbs which are going through gentrification are likely to exhibit the best property price growth.

As Melbourne residents trade their backyards for balconies and courtyards, villa units with renovation potential and townhouses in Melbourne’s middle-ring suburbs will make excellent investments. 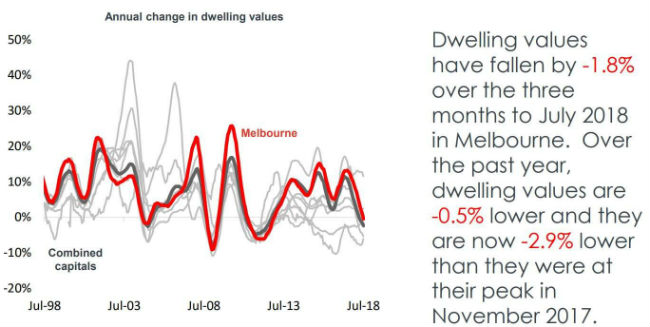 The Brisbane property market languished over the last few years.

However, while overall dwelling values increased 1.3% over the past year, a number of gentrifying middle-ring suburbs exhibited double-digit growth.

Yet Brisbane is the market with the most potential for growth over the next three years.

In the first seven months of the year, Brisbane dwelling values rose by 0.4%. While this may look trifling, because of falling property values elsewhere, this is the second highest growth rate after Hobart.

Importantly, the local unit apartment market, which was heavily oversupplied for the last few years, seems to be finally turning around.

At the same time, while local government infrastructure spending and a growing economy is creating more jobs, the unemployment rate remains stubbornly high. 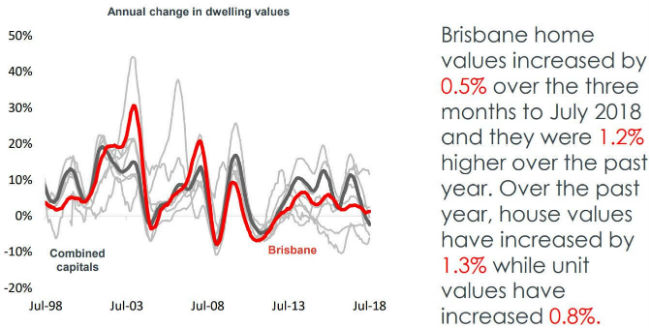 Adelaide dwelling values increased by 0.7% over the last year, down from 5.4% growth a year ago, however, this is the fifth consecutive year in which values have increased.

Like the rest of Australia, the Adelaide property market is very fragmented, with some suburbs growing faster than others.

I know some investors are looking for opportunities in Adelaide, hoping (speculating) prices will increase, but there are few growth drivers in Adelaide, which is experiencing above average unemployment rates and poor employment growth.

In my mind, there are better places to invest than Adelaide.

Perth dwelling values fell by -2.3% over the last year.

The Perth property market peaked in June 2014 and is still, more than four years later, yet to bottom, with dwelling values 12.1% below what they were in June 2014.

While the market may level out in the next six months, it’s much too early for a countercyclical investment in Perth. I can’t see prices rising significantly for a number of years. 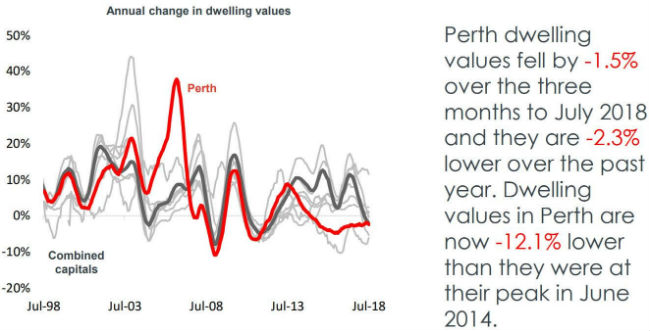 Hobart has been the strongest performing capital city over the last year returning overall capital growth of 11.5% and is likely to be the top performer this year — driven, in part, by investors chasing the ‘next hot spot’.

However, the pace of growth is slowing down and it’s important to keep in mind that Hobart is a very small market, so we must learn from the past. After all, this year’s hot spot can easily become next year’s not spot.

Last year, some 5,200 dwellings sold in Hobart, which is just 1% of the Australian market.

It also accommodates a 1% share of Australia’s annual population growth. Hobart is a small place and it doesn’t take much to influence its property market — in both directions.

Despite the current fast rate of growth, dwelling values in the Apple Isle have barely kept up with inflation over the last decade, and with few long-term growth drivers, I would avoid investing in Hobart.

The Darwin property market peaked in August 2010 is still suffering from the effects of the end of our mining boom eight years later, falling another 6.2% over the last year, and our research suggests that house prices are likely to keep falling for some time yet.

As opposed to capital cities in the east, where many jobs are being created, Darwin had a net loss of jobs last year, showing how its economy is languishing. 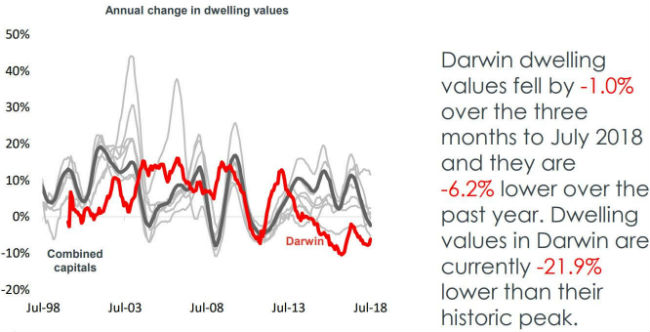 Canberra’s property market is a quiet achiever, having grown 3.5% over the last year, and is likely to continue to perform well, underpinned by a stable economy which has led to steady employment and above average population growth (+1.8% per annum).

The ACT Government predicts ongoing strong population growth of 6% in Canberra by 2020. About 60% of this growth will be due to natural increase and about 40% due to net overseas and interstate migration. 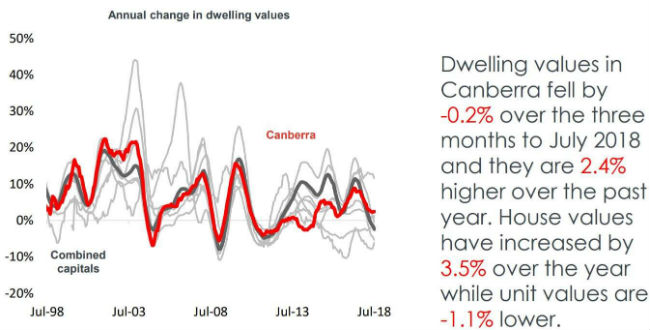 We’re clearly in the next stage of the property cycle, one of moderate growth in some regions, virtually no growth in others and falling prices in some.

In addition, many regional markets are outperforming the big capital cities

This makes it an opportune time for both home buyers and investors to buy property, as they’ll face less competition.

However, correct asset selection will be more important now than ever, so only buy in areas where there are multiple growth drivers such as employment growth, population growth or major infrastructure changes.

Lol people like you are really going to send so many stupid people into bankruptcy. Our Aus dollar is dropping and the economy is Not doing to well at all, just check the news and you will see the numbers don’t lie. The interest rates are most likely going to go up if they don’t and our dollar keeps falling be prepared to pay 2 dollars for a litre of petrol. House prices don’t go up from migrants and fake so called investors. It’s CREDIT AVALAIBLITY is what puts them up. Banks are simply not lending like they used to and if the royal commission makes more reccomedations the lending standard’s will be tightened further. Which means less money available and then houses get cheaper. My advice to you is stop supporting this ponzi scheme and get real with the housing market at the moment house prices are 30 percent overvalued. Remember what happend in Ireland, Spain and America well it can happen here. Yes just because we are in AUSTRALIA doesn’t mean it won’t happen here because it can and may just will.

Your first words were telling : ” going to send so many stupid people into bankruptcy.”
You are right – some investors will loose out, however smart property owners don’t just buy any property – they buy strategically and have a finance strategy and the correct ownership structures that help them ride the ups and downs of the property cycle

The media beat up the declines in housing in Sydney all the time-brainwashing buyers and resulting in reduction in demand. This is ruining it for investors wanting to sell and put gains in Super,so now more will draw on the pension,affecting Govt welfare. Other investors are scared off and this will mean shortages of accommodation and rising rents. Banks need to stop being so tight with loans to dual income earners and the media needs to stop the constant gloom and doom stories and fear with the current housing price softening. Its just cost me nearly 10% on a Sydney sale compared to the value of the house a year ago and i’m retired, putting this in Super to reduce the need for the pension! Steve