It’s interesting how the news can change in just one month with some commentators saying the property market has topped.

Yet it sounds like “the market” hasn’t heard these warnings, with auction clearance rates, particularly in Sydney and Melbourne holding up strongly.

Now, I don’t agree that the property market has topped, but I do believe that we’re in for a period of lower capital growth. So let’s whip around the Australian markets and unpack the latest CoreLogic chart pack to see what has scared some of the commentators.

According to Corelogic dwelling values rose by 0.1% in April 2017, their slowest monthly rate of growth since December 2015, with values unchanged over the month in Sydney and falling in Perth and Canberra. 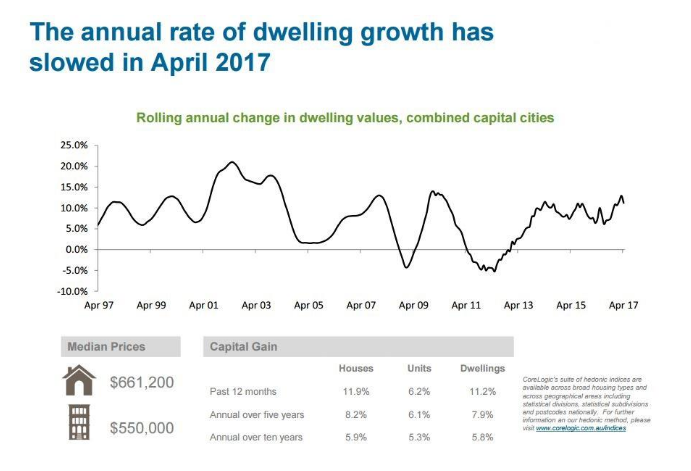 And the Melbourne property market came in a close second: 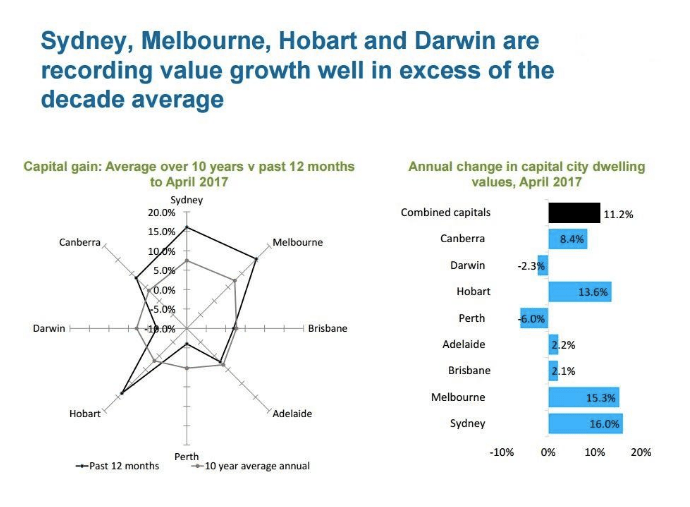 APRA is having an ongoing battle

As you can see from the chart below, investors still make up 46.5% of lending in New South Wales and a high proportion in Victoria and the Northern Territory.

What’s happening around the states

Sydney currently has three months’ of established housing supply available for sale across the city. Sydney has consistently seen low months of supply over recent years, however, the figure is currently at its highest level for this time of year since 2012.

Strong population growth (around 2% per annum) and a strong economy creating around 72,786 jobs — most of them full-time jobs — (almost half the new jobs in the country) have underpinned the Melbourne property market.

And once again the strong auction clearance rates show the underlying strength of the local market.

This will be boosted in the second half of this year as the first home buyers’ grant works its way through the market, creating an established home owner’s boost as the raft of new home buyers enter the market buying up established apartments.

Melbourne established housing stock currently sits at 4.2 months of supply for the city. Supply levels remain quite low but are at their highest levels for this time of year in five years. 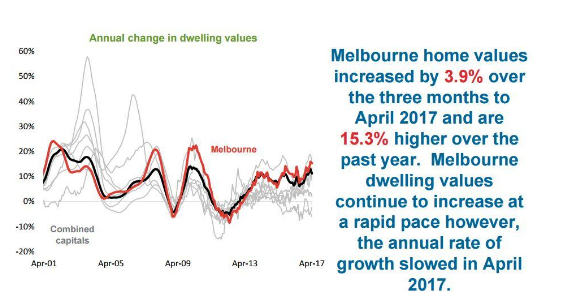 While the Brisbane’s property market performed better than Sydney last month, that wasn’t hard to do.

However, the Brisbane market is very fragmented and there are still some areas that are performing respectably and have good investment prospects.

On the other hand, there is a significant oversupply of new high rise off the plan apartments overshadowing the inner city area and nearby suburbs.

Employment growth is ticking up in Queensland, which created close to 18,000 new jobs last year.

Brisbane currently has 5.1 months of established housing stock available for sale. The months of supply figure is higher than it has been at this time of year for each of the past five years. 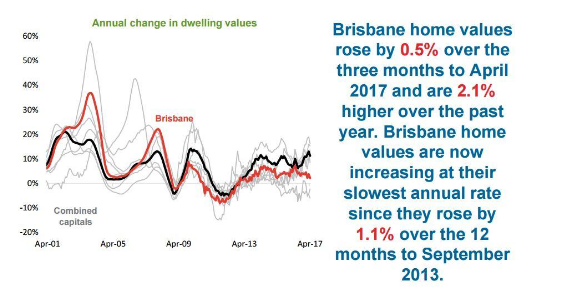 The Adelaide property market continues to languish, with home values up 2.2 % over the last 12 months.

Less than 8,000 new jobs were created in Adelaide last year.

The Perth property market is still in its slump phase, with a significant oversupply of properties for sale.

As opposed to the eastern states where jobs are being created, Perth lost around 4,406 jobs last year.

At the moment there is 8.3 months of established housing stock available for sale in Perth. This is a high supply figure relative to other capital, but it is well down on the 8.7 months at the same time last year.

Last month the Reserve Bank expressed growing concern about the state of the WA property market and economy, warning there are more dangers ahead.

It said WA had the worst mortgage arrears rate in the country, which in turn was hurting property prices, the private rental market and the commercial sector.

Though iron ore prices were, until recently, relatively strong, the bank believes the local economy could struggle even more in coming months.

“If commodity prices were to fall or not translate into improved economic conditions in mining-exposed regions, business failure rates may pick up further,” it said.

“In WA and other regions exposed to the mining sector, economic conditions remain challenging and both detached house and apartment prices have fallen as income and population growth have slowed.” 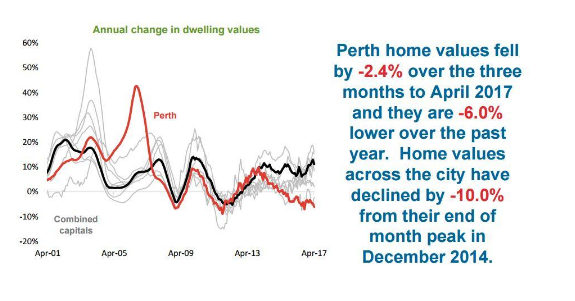 Hobart property performed very well last year — growing 13.6% over the year — and even though some commentators are suggesting it’s a good place to invest, I don’t agree.

While Hobart created 3,262 jobs last year, there has been a net loss of 550 jobs in Hobart over the last five years.

The months of supply figure for Hobart is the lowest it has been for many years.

There is currently 4.1 months’ worth of established stock available for sale, which is down from 5.0 months a year ago and the 7.2 months the year previous, suggesting Hobart property prices should continue rising for a while. 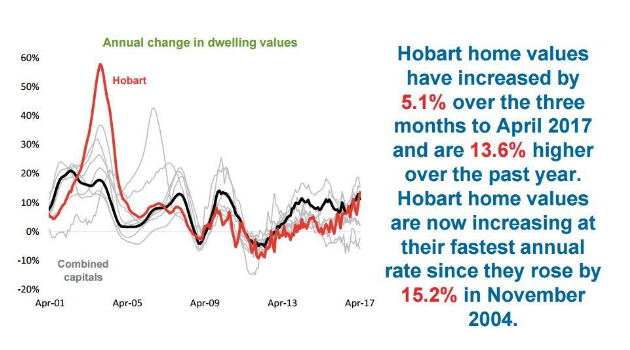 Like Perth the Darwin property market is still suffering form the effects of the end of our mining boom.

Prices are still falling and they’re likely to keep falling for much of this year.

I’ve always found investor driven markets more volatile than our big capital cities and that’s why I avoid them.

Darwin had a net increase of 153 jobs last year, showing how its economy is languishing

Across Darwin there is currently 6.7 months of established housing supply, which is well down on the 10.5 months at the same time a year ago and 7.5 months over the previous year.

It is the only housing market, other than our two big capital cities, where the cumulative capital gain has been greater than 35.8% post the global financial crisis.

There is currently 2.6 months of supply of established housing stock for sale in Canberra. The months of supply level is the same as what it was a year ago but lower than the previous years highlighted.

The rate of population growth at a national level is lower than recent highs but has steadied over recent quarters thanks to improving net overseas migration.

Victoria is seeing a substantially more rapid rate of population growth than all other states and territories.

The Melbourne and Sydney property markets are continuing to outperform the other states as continuing demand from investors and wealthy home owners drives capital growth.

However, this is likely to moderate in future months and at this mature stage of the property cycle careful property selection will be critical for investors. Our markets are very fragmented and not all properties are growing strongly in value, and some will make very poor long term investment choices.