Many of the property market predictions made this time last year were wrong—mine included!

For example, the Sydney and Melbourne property markets performed much stronger than the commentators expected.

According to CoreLogic, combined house values across the combined capital cities increased by 11.1% over the last year, compared to an 8.0% increase in unit values.

However, our markets are fragmented with the annual change in home values varying considerably from state to state: 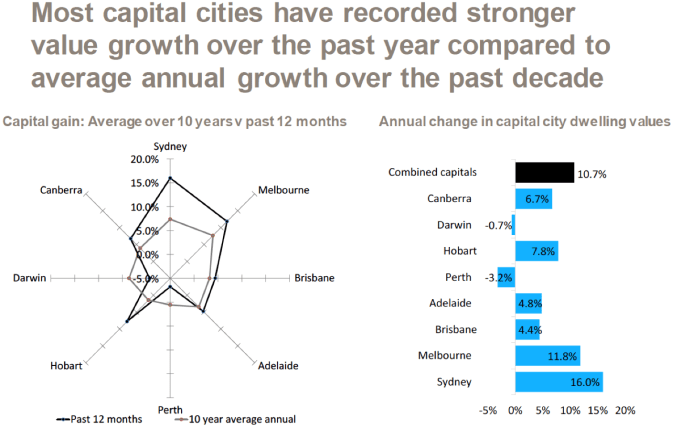 Let’s look at this in a little more detail.

I remember that 12 months ago, at the beginning of 2016, many were prepared to write off the Sydney property market and saying that not only was the boom over, but Sydney property values were going to crash.

But Sydney’s fundamentals were strong and after a slight lull at the beginning of last year, Sydney’s price growth over 2016 was stronger than any other capital city, finishing the year up 16% over the last 12 months. 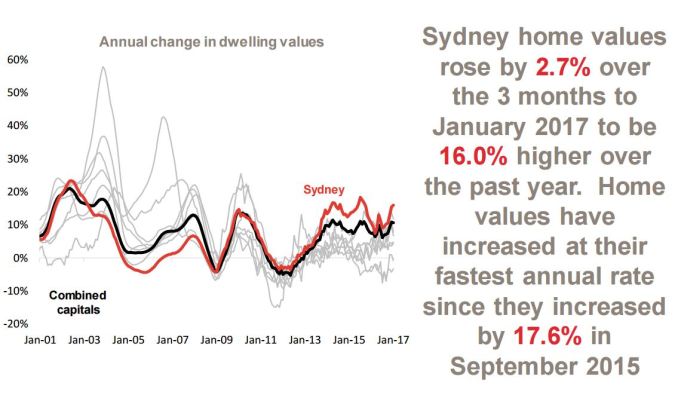 The Melbourne property market also performed strongly over the last year, with strong population growth (over to 2% per annum) and a relatively strong economy that was creating more jobs underpinning its growth. 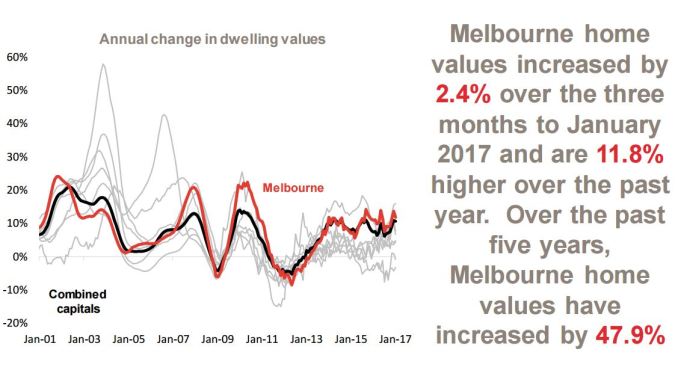 Brisbane’s property market has confounded those “hot spotters” who have predicting it was going to be “the place to be” for the last few years.

While overall growth in Brisbane was +4.4%, the market is very fragmented. There are still some areas that are performing respectably and have good investment prospects, but on the other hand, there is a significant oversupply of new high rise off the plan apartments overshadowing the inner city area and nearby suburbs. 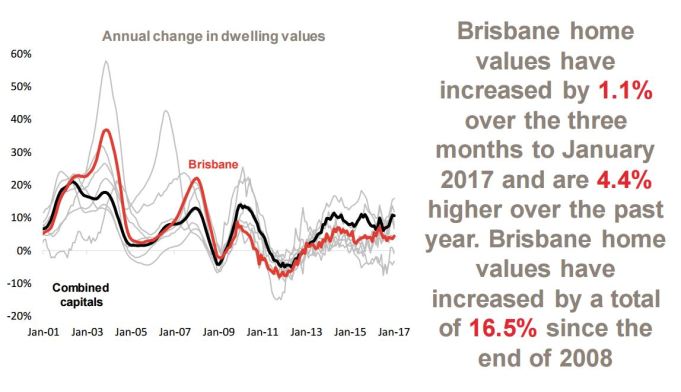 After a little flurry at the beginning of last year, the Adelaide property market stalled a little mid year and home values recorded a 4.8% rise over the last 12 months. 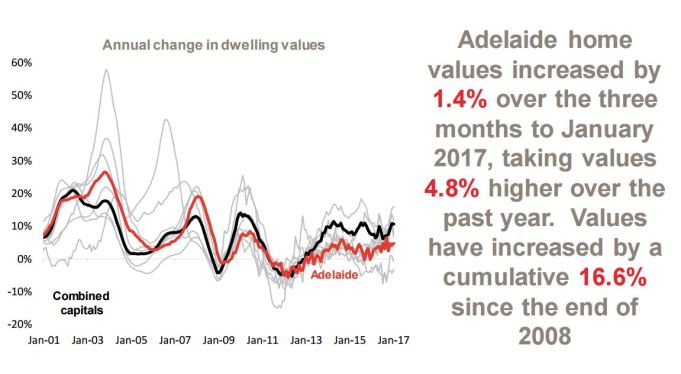 The Perth property market is still in its slump phase with a significant oversupply of properties for sale, and even though values rose a little at the end of the year, overall, home values finished the year lower than they started.

I believe there is still some downside to the Perth market as it works its way through the excesses of the mining boom. 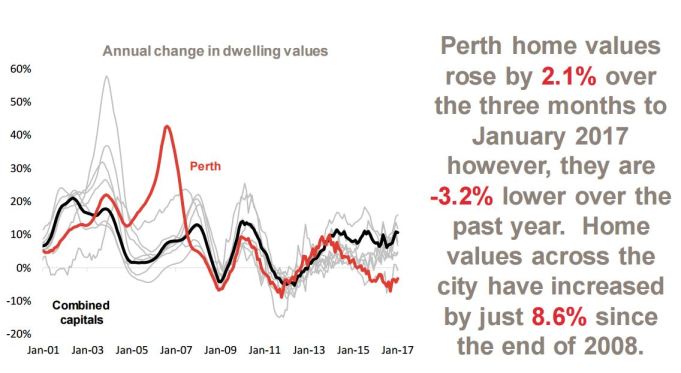 Darwin property values were flat for most of 2016, but even after a little flurry in the last quarter, overall prices fell -0.7% over the last year. 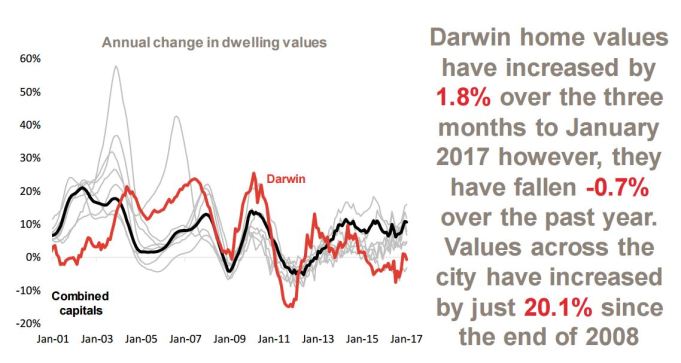 Canberra’s property market performed strongly last year and is the only housing market, other than our two big capital cities, where the cumulative capital gain has been greater than 20% post the global financial crisis. 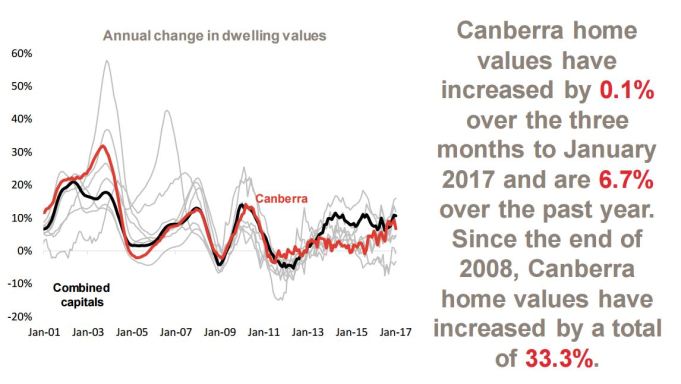 Hobart property performed well last year, and even though some commentators are suggesting it’s a good place to invest “because it has to catch up”, with minimal population growth and slow economic growth, there seems little reason for property values in Hobart to grow substantially.

They have only increased by 10.6% in the last eight years. 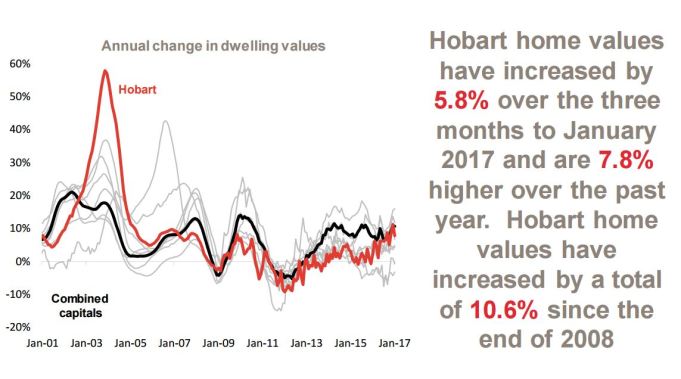 The Melbourne and Sydney property markets are likely to once again outperform the other states in 2017 as continuing demand from investors and wealthy home owners once again drives capital growth.

However, the looming oversupply of new and off-the-plan apartments in Brisbane, Melbourne, and to a lesser extent Perth is likely to put a damper on inner-city property values, and as always, the level of property price growth will depend on what the Reserve Bank and the banks do with interest rates.