Brace yourself … the Sydney property market is housing bubble set to burst.

That’s what the media have been saying over the last week following the recently released UBS Global Real Estate Bubble Index which analyses the risk of housing bubbles in global financial centres. Sydney is listed as fifth riskiest. 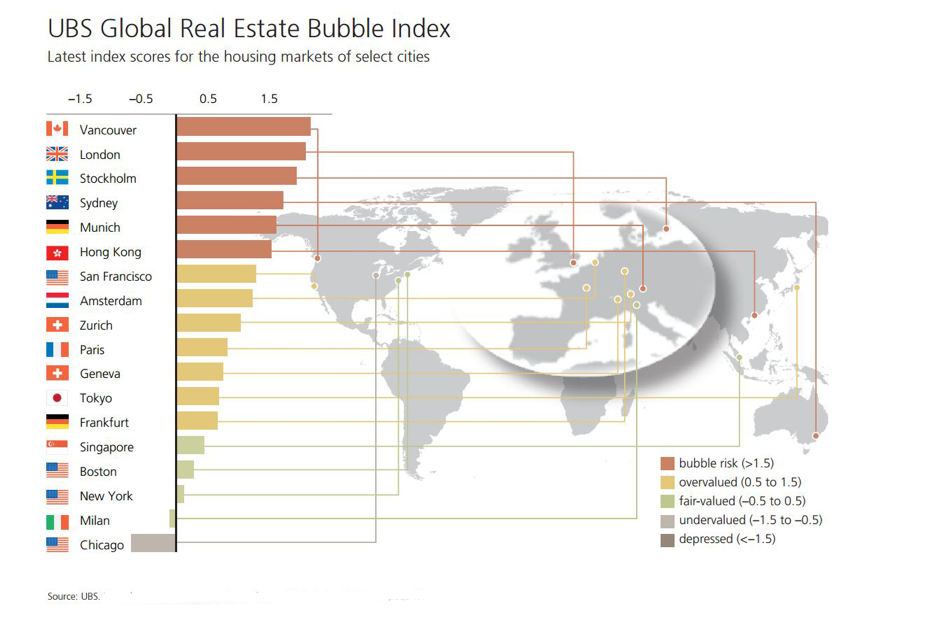 According to the report:

“The dip in prices in 2015–16 proved short-lived… Incomes increased by a meager 2% in inflation adjusted terms.

“Tax breaks and interest-only loans are whitewashing the worsening affordability for the time being.”

The report continues with, “Sydney’s housing market has been overheating since the city became a target for Chinese investors several years ago”.

These warnings echo similar concerns made by UBS 12 months ago – and the bubble didn’t burst. No doubt the Sydney market is not at a mature stage of its property cycle, but I can’t see the bubble bursting any time soon.

Just to make this clear, UBS say that price bubbles are a regularly recurring phenomenon in property markets, and of course that’s true. To UBS the term “bubble” refers to a “substantial and sustained mispricing of an asset”.

But then they go on to clarify: “the existence of which cannot be proved unless it bursts”.

And they confirm their Index does not predict whether and when a correction will set in.

What could make the bubble burst?

Clearly the Sydney property boom of the last five years is over. Price growth has slowed over the last quarter and the Australian Prudential Regulation Authority (APRA) is getting its way restricting investor lending.

Home buyers are staying put rather than upgrading and auction clearance rates are falling. However for a property market to crash you need desperate sellers willing to give away their properties at fire sale prices and no one willing to buy them. That’s not on the cards for Sydney at present.

According to George Raptis, director of Metropole Property Strategists in Sydney, for the Sydney property market to crash – and that’s different to the normal cyclical correction – we need one or more of the following four criteria.

1. A major depression (not just a recession). Nobody with any economic credibility is suggesting this will occur in Australia in the near future.

2. Massive unemployment and people not able to keep paying their mortgages. This is unlikely to occur with our relatively strong economy creating new jobs and Sydney punching above its weight in the percentage of jobs created.

3. Exceedingly high interest rates so that homeowners won’t be able to keep up their mortgage payments. Again this isn’t on the horizon.

4. An excessive oversupply of properties with no one wanting to buy them. While this may be the case in the Brisbane CBD, this is not occurring in Sydney.

Raptis explains, “It’s true that Sydney property prices are high but that doesn’t mean they’re going to crash, which seems to be what many potential buyers who missed out over the past few years are secretly hoping for.”

“Remember – Sydney is an international coastal city, that deserves a premium price for its lifestyle as well as its amenities.

“The Sydney property market has performed strongly over the past five years, but this has been underpinned by strong jobs growth with Sydney producing close to half our jobs over the last year, strong population growth and also a relative undersupply of properties.

“The economic fundamentals of Sydney are still strong with significant planned infrastructure spending, so the chances of a “bust” seem minimal at best and historically have actually never happened in any of our major capital cities.”

I don’t believe that the Sydney “property bubble” will burst.

Of course, the strong property price growth of the last five years was unsustainable. We are entering a period of moderate growth within the inner and middle rings, the more affluent suburbs, where jobs and wages growth remains strong.

But the story is likely to be different in Sydney’s outer “mortgage belt suburbs” where property values are likely to fall, particularly next year as interest rates rise.

In these locations many young families have stretched themselves financially to get into the housing market. After borrowing to the hilt to purchase their new home they’ve gone to one of the big retailers and put furniture and television packages on store cards with one to three years interest-free terms.

When these honeymoon periods come to an end it is likely many young families will find themselves in financial trouble, and unfortunately some will have to sell their homes at a time when there will be fewer buyers.

It’s interesting how history repeats itself.

History tells us that all property markets repeatedly crash. The property market cycle lasts 18-20 years. The main driver of property markets are the underlying land markets, which are themselves driven by speculation. When credit is inexpensive and readily available, the level of speculation is all the more intense and prolonged.

Eventually, rising land prices can no longer be absorbed by consumers seeking to lease an apartment or home, or households looking to purchase a home (particularly if a first-time homebuyer).

The very low mortgage interest rates orchestrated by central banks since the 2008 crash served to stimulate demand for residential property. However, it did not take very long for the expanded affordability to be capitalized into higher land and then property prices. Now, as many “working families” are priced out of the residential property markets, keeping transaction volumes up has resulted in an increased market share to investors (domestic and foreign) intent on acquiring property to hold for as short a period as possible to be flipped to a significant profit.

Absent a broad increase in household income and household savings, transaction volume cannot be sustained without mortgage loan investors agreeing to lower cash down payment requirements, adopt more flexible creditworthiness standards, extend mortgage terms or offer interest-only terms. And, when this is not sufficient, government must be convinced to step in to subsidize the construction of affordable housing units.

Even so, all of the gimmicks and tricks eventually run their course. Businesses that lease space experience declining profit margins and, best case, look for less expensive locations. When enough businesses begin to leave a market, unemployment begins to climb and the demand for residential property disappears.

The only issue is how deep the crash will be and how long it will last before property prices fall to levels low enough to attract businesses and households back.

As some analysts in Australia have been trying to explain to the nation’s elected officials, the only way to prevent yet another property market crash is to use tax policy to tame land markets, to remove the potential to profit from land speculation. Australia has some experience with the right policies, which is to impose an annual charge on the ownership of land equal to the potential annual rental value of whatever locations are held. But, it seems that the lessons of the past have been forgotten (or, buried, so that those who benefit most from existing tax policies will continue to provide the funds for political office-seekers).