Is Sydney really at risk of a property bubble bursting?

Brace yourself. After a surge in prices over the past five years, Sydney is facing a ‘housing bubble’ according to UBS Wealth Management’s latest Global Real Estate Bubble Index

However, if I’ve read one property bubble story I’ve read a hundred. The media has been full of talk about whether the Australian property market is significantly overpriced and due for a significant correction for years.

But are they right this time?

Are we in for a property market collapse?

The simple answer is no – property values are not about to collapse!

Sure, house prices are high compared to many parts of the world, but rising prices per se don’t cause a bubble.

Property values will correct in the future but our property markets have been rising and falling for centuries and there has never been a “collapse” of Australian capital property values in modern times.

You see, what is needed for a bubble to occur is for the rises to be fuelled by increased borrowings – leverage – which makes the banking system fragile and unstable and of course the implication of a bubble is that it will burst and prices will collapse.

The UBS report analyses residential property prices in 18 major financial centres and has created an index the bank says is “designed to track the risk of housing bubbles in global financial centres”.

It found house prices in the cities within the bubble risk zone have increased by almost 50% on average since 2011, while outside of those six bubble zone cities, prices have risen by less than 15%. 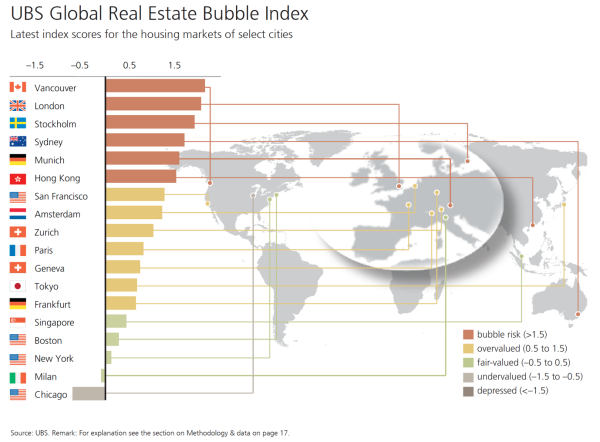 UBS said Sydney’s housing market has been overheating since the city became a target for Chinese investors several years ago, with housing prices, adjusted for inflation, peaking in 2015 after a 45% rise since mid-2012.

However, there’s no need for the kind of concern about a housing crash that was seen in the US a decade ago, according to Jon Woloshin, a strategist at UBS Wealth Management.

Remember, for a property market to crash you need desperate sellers willing to give away their properties at fire sale prices and no one willing to buy them.

To make our property markets crash – and that’s different to price growth slowing or the normal cyclical correction – we need one or more of the following four things:

George Raptis, director of Metropole Property Strategists in Sydney agrees there is no cause for alarm:

“It’s true that Sydney property prices are high but that doesn’t mean they’re going to crash, which seems to be what many potential buyers who missed out over the past few years are secretly hoping for.

“Remember – Sydney is an international coastal city, that deserves a premium price for its lifestyle as well as its amenities.

“The Sydney property market has performed strongly over the past four years, but this has been underpinned by strong jobs growth with Sydney producing close to half our jobs over the last year, strong population growth and also a relative undersupply of properties.

“The economic fundamentals of Sydney still stack up so the chances of a “bust” seem minimal at best and historically have actually never happened in any of our major capital cities.” says Raptis

“While I believe that there is unlikely to be any significant fall in price in most parts of our most populous city, there are some concerns about the oversupply of properties that is looming in certain locations of Sydney. That’s why I’d be very, very careful and avoid buying: off-the-plan properties; new properties in the large developments; and established properties close to those locations where an oversupply new projects is looming.

Does all this mean investor should avoid the Sydney property market?

First of all there is not “one” Sydney property market – there are different markets based on geography, price points and type of property.

So rather than avoiding investing in Australia’s largest property market, I’d be carefully selecting “investment grade” properties in selected segments of the Sydney market.

I’d look for established properties with a “twist” and a level of scarcity in affluent, gentrifying, inner and middle ring suburbs where there is no looming oversupply, and in suburbs where the supply /demand ratio is still causing prices to increase.

Then I’d be holding these properties for the long term, recognising that Sydney’s population and economic growth will underpin properties prices.

But if history repeats itself, smart investors and homebuyers will be out buying the right type of property, while others will be more cautious and sit on the sidelines waiting to see how things pan out. While this may seem safe to them, they are likely to miss out on some great opportunities.

It is easy to do nothing. As Donald Trump says: “Nothing is easy… but who wants nothing.”

In other news, a car salesman says now is the time to buy a new car.

You’re not foooling us Mr Yardney, we SAW the big short. We know your game.

I’m looking for the day house prices are affordable especially for first home buyers in established areas….not out in the farms with shit congested roads and crap infrastructure because it’s the only place you can afford. While investors snap up houses in inner suburbs.

yeah….nahhhhh its time for a well and truly deserved depression/recession. Banks are in trouble lately on a global scale and a lot of tension between countries have been brewing up lately as well so from a political standpoint this sounds like the best excuse ever to hide it.

Lets face it!! Wages either need to increase or property needs to drop for a sustainable future….its a no brainier whats going to happen.

Wages aren’t increasing. I would love to increase my wage & the wage of my employees, but it just isn’t that simple.

I would wager that the little “wage increases” that you see in statistics are in the public sector. After all, they have the ability to run up the government credit card. Good luck to those public servants when they lose their jobs and have to transition into a small business environment or the like, that would be quite an eye opener for them 🙂

Having said that, a housing crash would be devastating beyond belief in Australia. Thinking about the business owners that feed equity from their property (properties) back into their businesses. A severe shock to the housing market would immediately spark massive job losses across the board.

I find it intersting – there’s always a young generation that has missed out, wanting the market to crash. Sure the market is hot and it will slow down and even drop a little but that doesn’t mean a CRASH

“…rising prices per se don’t cause a bubble.” Of course they do. Rapidly rising prices are the main inflation indicator of a bubble, especially when housing is no longer affordable and prices overwhelm income, causing a side effect of an ever shrinking disposable income. Most housing purchases made are speculative investments that drive prices up. Even those who buy a house as a long term investment are pressured by rising prices that trigger the panic mode of the “not to miss the boat” alert, which gets people who cannot possibly afford a house to buy one. That creates a volatility that banks may not be able to handle. The rules by the Australian Government for buying real estate in Australia, homes or investment properties for overseas investors have been made easier. Obviously they need to keep it coming anyway possible. So, just because it hasn’t happened yet, doesn’t mean it won’t happen at all.

The Sydney property bubble must burst as soon as possible for the sake of Australians. Property prices must drop by at least 50%. The australian government needs to stop relying just on property related taxes and focus instead on reviving other industry sectors. The recent experience with the mining sector is a good example.The average household income in Sydney needs to be around 250K to afford a Sydney property in today’s market. What is the point of spending billions of dollars on defense if a large percentage of the Australian land and propertires are no longer owned by Australians?