Then and now: what was happening in property in 2006?

A lot can happen in a decade. In fact, a lot did happen over the last 10 years.

The reason for my reflective mood is that the 10 anniversary edition my first book How to Grow a Multi-Million Dollar Portfolio in your spare time has just been published.

So I thought I’d look at the following in a series of blogs the next 3 weeks:

When I think back to 2006, parts of the Australian property market were feeling sorry for themselves having come through a few difficult years following the “recession we had to have”, as it was called by our then Prime Minister Paul Keating.

In mid 2006 median house prices around Australia were:

And while there was evidence that our property markets were starting to recover, there were still stories in the papers of the Sydney property crash with house prices having fallen 10% from their peak in 2003. This was especially the case in Sydney’s south western and western suburbs where rising petrol prices and the impact of repeated interest rate rises were pushing some homes owners into debt crisis.

However on the other side of Australia Perth house prices recorded a staggering 36.6% rise over the year, making it the second most expensive capital city behind Sydney.

Back in 2006 about 70% of the new dwellings we were building were on the fringe of our capital cities and inner-city living was in its infancy in Sydney and Melbourne.

A decade ago, despite some people thinking I was crazy, I was bold enough to recommend buying well-located residential real estate in Sydney and Melbourne.

Back then I spoke of the importance of holding residential real estate for the long-term to make the most of compounding growth over the years.

Nothing has changed, it’s still my view that the “investment grade” properties in your portfolio will ride out the short to medium-term ups and downs of market factors as long as you have adequate financial buffers in place and stay focused on your end goal. 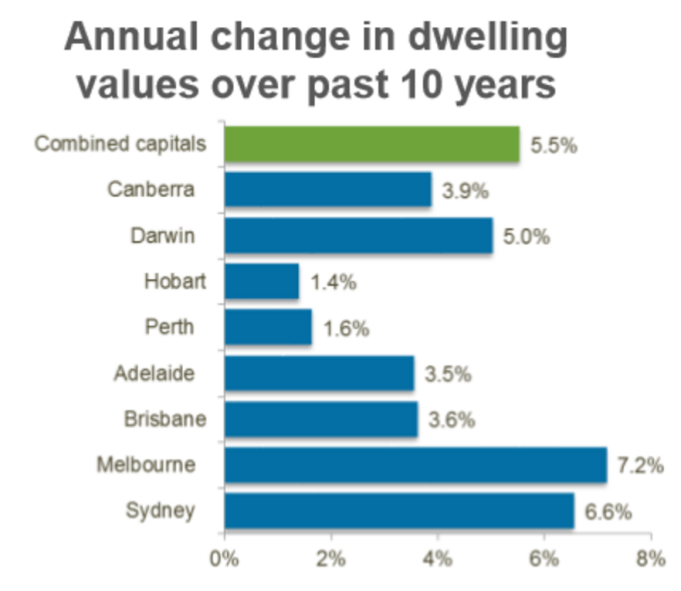 It’s interesting to look back now and realise that no one knew of the iPhone back then (well apart from Steve Jobs perhaps) and the seeds of the sub-prime crisis were already building in the US but not many people knew about it (or they weren’t talking about it at any rate).

Within 12 to 18 months, however, the rest of the world would be dragged into the Global Financial Crisis and any positive momentum in the Australian property market would corresponding come to a screeching halt.

Ten years ago variable interest rates hit more than 9% because of rampant inflation, but here we sit today with inflation going backwards and rates less than half that. That’s an amazingly different set of statistics when you think about it.

So 10 years ago we were on the cusp of the biggest world economic downturn since the Great Depression and no one predicted it.

There was nothing any of us could have done to prevent these major economic wobbles but one thing that strategic investors could do was stay their course and not panic.

Similarly, no one really predicted three of the most significant factors affecting our property markets over the last decade:

So one of the key differences in my personal investment strategy since that time is that I now look more into the future than the past, as I’ve realised you just can’t foresee the future looking in the rear view mirror, no matter how much research you do.

Instead today I focus my research on where future economic growth is likely to occur because this will lead to jobs growth, which leads to more people, more housing demand and ultimately to capital growth.

I’ve also further developed my Five Stranded Strategic Approach to ensure that the properties that I invested in, and the ones that I recommend to our clients, are investment grade, which will likely weather any temporary vagaries of the national or global economy.

At the beginning of this decade (in 2010) I made a prediction that by 2020 Sydney’s median house price would hit $1 million.

Well, it actually happened in half the time that I predicted, which is another downside downside of forecasting!

In my next blog in this three-part series on the Australian property market now and then, I’ll outline how the markets have changed for the better and, unfortunately, for the worse.