How ASOS turned an embarrassing typo into a chance to connect with 40,000 customers

Fashion giant ASOS has turned a glaring typo into a limited edition opportunity this week, after realising that failing to proofread a packaging order resulted in an unfortunate error.

The online fashion retailer’s UK team confessed to the stuff up before any of its users would have even noticed it, announcing via Twitter that it “may” have accidentally ordered 17,000 shopping bags misspelling the world “online”.

Ok, so we *may* have printed 17,000 bags with a typo. We’re calling it a limited edition. pic.twitter.com/wTpKNid4V5

Owning up to the basic mistake turned out to be a winner for the company, however, leading to 43,000 Twitter engagements from its social media community, and several calls from customers to have their orders packed in one of the bags, printed with the promise users can “Discover fashion Onilne”.

Watch ebay go mad with people selling them for £1000’s

Some predicted the “limited edition” packaging would sell for thousands on eBay, while other brands shared their own stories of typos that tripped up their branding initiatives.

But it was the ASOS social media team’s sheepish admission of the small error that saw hundreds of customers sympathise with the brand, saying it wouldn’t have an impact at all on their desire to shop with the business.

The brand even took the opportunity to respond to customer’s tales of typo woes with suggestions of new-release ASOS products they might be interested in — free of typos, thankfully. 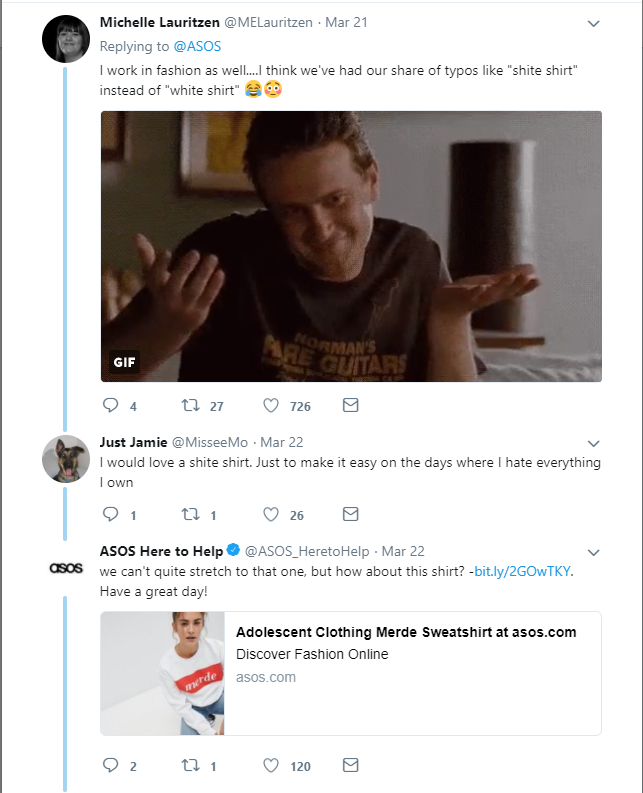