In-house chefs and pop-up tastings: Australia’s milk bars are getting a makeover

Do you have a corner store? Once an icon of suburban Australia, many neighbourhood corner stores vanished in the face of unrelenting competition from large supermarkets, global convenience franchises, modern service stations and extended trading hours.

Many will argue this is just the evolution of modern Australian retailing. Few consider the social and community impacts of the loss of this former neighbourhood cornerstone.

Lately, though, a corner-store revival of sorts has been underway. A new generation of shopkeepers is offering a contemporary twist on the old milk bar. These new stores could play an important role in restoring the sense of community that many feared had been lost along with the corner store.

The bigger things get, the more isolated we feel

As massive shopping centres emerged and urban population density increased, the connectedness with community people once felt diminished. Research has shown feelings of loneliness and social isolation are directly related to neighbourhood attachment and indirectly related to local amenities.

Social anonymity theory is often used to explain the level of connectedness within society. Sociologist Louis Wirth’s seminal 1938 work, Urbanism as a Way of Life, highlighted the elements of social anonymity and isolation as cities grew. He noted the relative absence of intimate personal acquaintances, and the segmentalisation of human relations which are largely anonymous, superficial and transitory.

Simply, as cities grew larger, people began to feel anonymous and isolated. We stand on busy trains, trams and buses every morning, surrounded by people, yet can feel very alone.

A recent survey found only half of us would recognise our neighbour if we saw them on the street, or would invite a neighbour into our homes. Similar findings have been made in comparable nations such as the United States and United Kingdom.

From the 1950s until the early-1970s, almost every suburban neighbourhood had a corner store. Locals of all ages were drawn to these shops for newspapers, bread, milk, tobacco, ice-creams and mixed lollies.

Stores were more than just economic hubs, they were social by nature. People knew their local shopkeepers, and shopkeepers knew their customers.

Children experienced that first taste of independence in walking or riding their bike to the local shop, often with the family dog in tow. Shopping locally involved picking up a few items for mum and dad, as well as the obligatory ice-cream or bag of mixed lollies.

A typical scene outside a local store would show children on bikes, dogs waiting by the door and customers stopping for a chat while picking up the essentials. 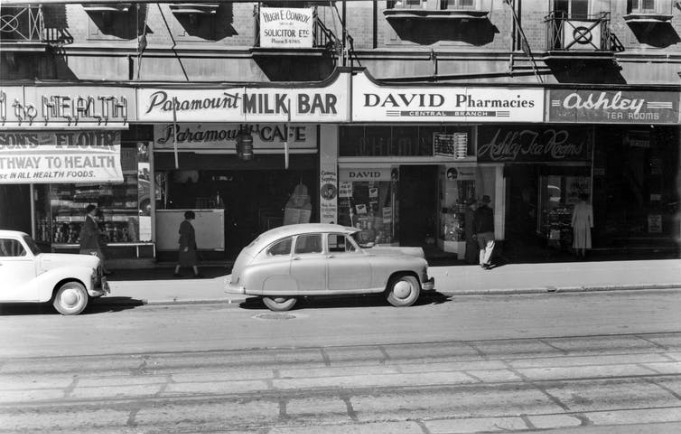 Until the 1970s, milk bars were a ubiquitous feature of Australian neighbourhoods. This is Adelaide Street, Brisbane, in 1952. Source: Queensland State Archives.

From 1980 onwards a combination of factors created a ‘perfect storm’ that led to the closure of neighbourhood stores across Australia.

The introduction of Sunday trading for large grocery stores and the growth of convenience stores combined with petrol stations meant customers could buy most items sold in their local corner store from supermarkets and service stations, often at much cheaper prices.

BIS Shrapnel reported a 34% decrease in the number of corner stores between 2010 and 2012. Australian Food News reported in 2012 that the numbers of traditional milk bars had declined significantly over the previous 30 years.

As well, the immigrant parents who had run many stores found their children were often reluctant to take over a business with long hours and modest returns. Stores suffered and many closed. When the family-run business failed, one, two or three generations often moved away from the area.

The closure of local corner stores left both literal and figurative holes in neighbourhoods. People had no choice but to shop full-time at larger supermarkets, often further from home and requiring car travel.

Eamon Donnelly has painstakingly documented the history of the corner store and the ubiquitous milk bar. His book, Milk Bars, traces the history of Australia’s love affair with the local store in a striking collection of images of once-thriving and later-abandoned stores across the country.

In some urban and suburban areas, the humble corner store is having a revival of sorts.

A new generation of shopkeepers is reinventing the local store. These new stores are striving to meet the demands of a new kind of local customer by providing a friendly, local shopping experience. They are introducing in-house chefs, cafes and pop-up tastings, stocking local products, spruiking eco-credentials and supporting local schools, charities and causes. The new breed of local shopkeepers is keen to encourage recycling, low- or zero-waste products and packaging, and sustainable retailing.

Aided by social media marketing, these stores are sharing their personal stories and in many areas are the new community hubs. In some suburbs, old milk bars are being revived in all their former retro glory. Customers can relive their childhood experiences of pinball machines, mixed lollies and proper milkshakes.

Sadly, not all corner stores can be revived. For those that are, the benefits for the local community are tangible. Local stores have an important role to play in rebuilding a sense of community and trust, as they foster social engagement and encourage people to walk or ride their bikes in their local area.

While many corner stores have closed over the past 30 years, the success of those that have survived or been revived is based on adapting to what local consumers are demanding — convenience, coffee and community.

In suburbs and inner-urban areas, many small stores are reinventing the idea of what a corner store can and should be. Buildings are beginning to be repurposed and refurbished. This restores a sense of pride in local areas and encourages further development and new businesses to open, like the old Peters Ice-cream Factory in Brisbane’s West End.

Local retailing in urban centres can act as ‘social glue‘. People are again looking to connect with their community around local shopping.

NOW READ: This small business hosted the PM and is seeing floods of customers because of a Richmond Tigers mural