How do we reverse Australia’s retail vacancy apocalypse? Here’s one idea

Has the sight of an empty parking space ever filled you with a sense of foreboding?

I had never had that experience before. But last week, I went to investigate the retail situation in inner Melbourne, and the sheer absence of people was intensely troubling.

On Tuesday, I set off for a walk along Brunswick Street in Melbourne’s Fitzroy (which is, dear reader, within my 5km limit, fear not).

Brunswick Street is an iconic strip of shops in a suburb which has gone from poor to cool to gentrified (and which is now arguably losing its aura of cool as a result).

It runs north-south for 1.5km of retail and restaurants, pubs and pilates. Its southern terminus is just a few hundred metres from Melbourne’s CBD grid.

I felt compelled to go and check it out because the Reserve Bank of Australia had put the frighteners into me.

It released the below graphic as part of its Financial Stability Review, and it shows retailers fleeing their landlords in droves, leaving behind vacant shopfronts. 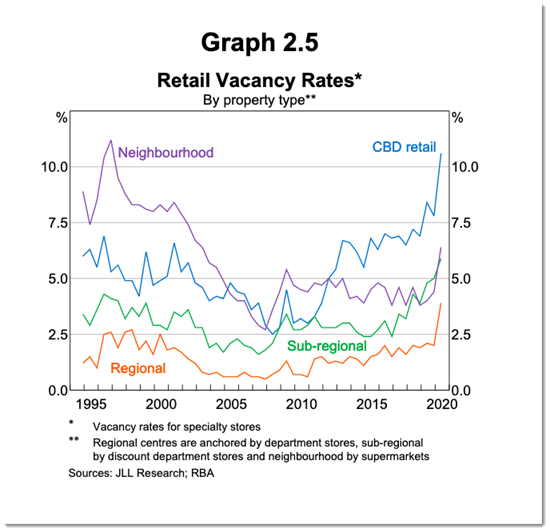 The phenomenon is worst in central business districts, where an absence of office workers is making retailing a very lonely existence.

Note the pandemic is just the final straw for retail vacancy.

A record share of shops were vacant even before the novel coronavirus swept the globe, thanks to high rents and pressure from online.

That is certainly the case on Brunswick Street, Fitzroy. I saw a lot of ‘for lease’ signs — 30 in total on my 1.5km walk.

But not all of those have gone up since the start of the lockdowns in Melbourne. 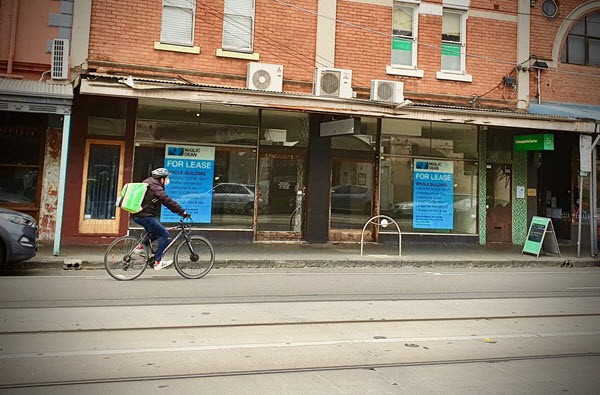 While Brunswick Street lacked for shoppers on Tuesday, it did not lack for delivery riders. Source: supplied.

The pandemic, lockdowns and a recession mean it will take even longer than expected to get new tenants in.

Brunswick Street could be looking at vacant shopfronts for years.

That’s a problem because shopping streets depend on spillovers from one shop to another.

People come for coffee and then pop into a bookstore, for example. Or they come to visit a particular boutique and then buy something from a range of others.

This is why shops cluster together. The agglomeration benefits are greater than the downside of competition.

But when a high street is full of vacant shopfronts, that spillover effect becomes muted. All the shops suffer.

One of the promises shopping centres make to their tenants is to keep vacancies low, but on a high street, with many different landlords, that doesn’t happen.

Won’t the market solve the problem?

Ha! As we know, shopfronts can sometimes sit vacant for years.

In theory, yes, landlords simply drop the price of rent until they fill the space.

In practice, we see something else.

That leaves economists scratching their heads.

One theory is if landlords fill a commercial space with a new tenant at a lower rent, it forces the property to be revalued.

If the space now commands a lower rent it is worth less than before. The rationale is then that it’s perhaps better to let it sit for a while, and leave open the option of selling, rather than to lock in a new lower rent.

There is now a well-understood approach to underused retail space, and it comes from Australia.

In the 2000s, Newcastle was dilapidated and its city centre was seemingly on the path to ruin. A scheme called Renew Newcastle was born.

Renew Newcastle has since been copied all over the country, including in Adelaide.

At the risk of simplifying, the idea is to give artists and bohemians access to the empty shopfronts for free, or close to it, while leaving the right to promptly reclaim the space with the landlord.

It doesn’t work everywhere, but it’s been very successful in Newcastle.

It’s been quite a while since artists could afford rent in Fitzroy. Maybe giving them back some space is just what Brunswick Street needs.

NOW READ: ‘Meanwhile use’: How governments and landlords can manage properties left vacant by the COVID-19 crisis