Australian consumers have revealed themselves to be DIY mad, with Bunnings’ online store topping the list of most-visited Australian online retailers in the first quarter of 2019.

The research, completed by online discounts platform CupoNation, showed Bunnings was well ahead of the rest of the pack, despite only announcing its store launch mid-way through March, which it intends to roll out over the next 18 months. The hardware retailer boasted 41.2 million visits in the first three months of 2019.

Following Bunnings was supermarket leader Woolworths, with 33.7 million visits, and technology retailer JB Hi-Fi, which attracted 29.13 million shoppers. Other well-known retailers such as Kogan and Officeworks rounded out the top 10. 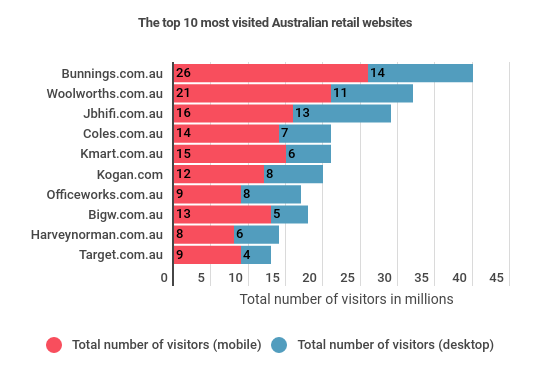 JB Hi-Fi has dropped two spots from its overall ranking as the most-visited online retailer across all of 2018, where it pulled in a total of 74 million clicks, however, Bunnings still managed to come in second overall, despite lacking a real e-commerce offering for much of 2018.

However, when non-Australian retailers enter the mix, the field changes drastically, with eBay and Amazon taking out the two top spots. In fact, eBay blitzed the field, attracting nearly 150 million more clicks than its closest competitor Amazon. 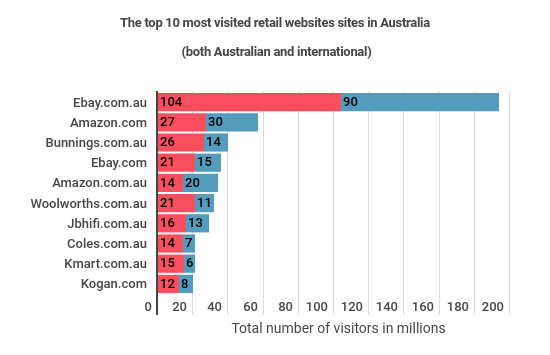 This is in line with last year’s statistics, which showed eBay ahead of the pack by nearly 300 million clicks. The report also reveals the ever-increasing numbers of Australians shopping via mobile, with on average 57% of Australia’s traffic to online stores coming via mobile.

NOW READ: The most visited shopping websites in Australia revealed

HUGE fan of bunnings. Always so handy to have them just around the corner