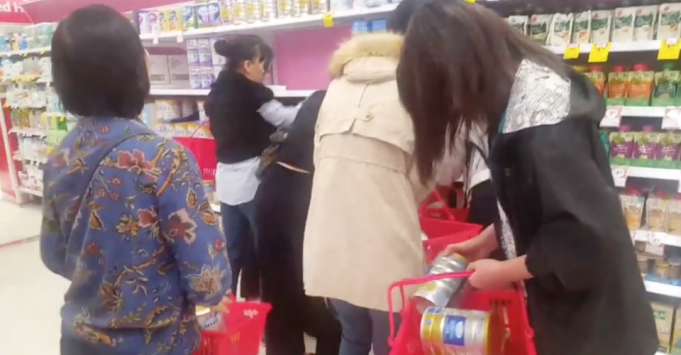 An angry Brisbane mum has challenged a major supermarket chain to ensure its stock of Australian-made baby formula was available to all shoppers after she filmed a group of customers clearing the shelves of the product.

A food safety crisis in China has led to local shortages as the product is bought and sent overseas.

Cindy Emma recorded a video of the buying frenzy complained to the Coles Facebook page and challenged the supermarket to ensure the products would be available to all customers, not just those planning to send the product offshore.

“This is what happens every morning at Toowong Coles Queensland, same people every day literally running into the store fighting each other, grabbing as much baby formula as they possibly can, leaving the entire shelf empty,” Emma wrote on the Coles Facebook page, alongside video footage.

“What are you doing about this Coles?”

Other brands baby formula was still available on the shelves and the customers did not appear to breach the limit of four-tins per person.

In 2008, a food safety crisis unravelled in China when dodgy baby formula was consumed by an estimated 300,000 infants. The inferior product killed six babies and hospitalised about 54,000.

To meet demand and undercut rising prices of premium products in China, Australian-based personal shoppers, known as daigou, began purchasing baby formula and shipping it to Chinese buyers at a markup.

The increased demand on Australian shelves set-off a shortage, and Coles and Woolworths implemented a four-tin limit in an attempt to circumvent the shortage.

None of the women in the video appeared to have any more than four tins.

Shoppers have complained the limit has not been enforced at stores on numerous occasions. Parents have suggested putting the products locked away to be purchased with identification, as with spray-paint.

A Coles spokesperson told The New Daily that high demand meant some product lines may not always be available.

“Due to supply and demand issues, we have a number of infant formula lines that may not be available in all stores. Coles is committed to ensuring our customers have access to these products and as a result we are limiting sales quantities to four units per customer,” the spokesperson said.

“In circumstances where parents have a genuine need for additional tins, we will take that into account. We are working with our suppliers on solutions to improve availability for customers. We apologise to customers for any inconvenience.”

Daigou tend to buy the premium products, which are as much as three times the price as the lower-cost products.

But Gribble said all of the products were required to meet the same safety standard.

“I guess the thing for parents to know is that there’s no real benefit to buying one of the premium products. They can just purchase one of the other products that’s cheaper, and not being scooped up like the premium ones are.”

Gribble said she did not think the shortage was as widespread as it once was, but said it was “mystifying” the shortage had continued.

“When it first started, manufacturers and retailers could be excused for not expecting it to happen, but it’s been happening for a long time now. You wonder why they’re not able to keep their stock [supplies] up to meet demand,” Gribble said.

“It is quite a serious problem in terms of them not managing their flow, of not making sure they have enough products there.”

Chinese buy and sell properties in China… now milk. People are homeless in Australia because of them.

Worked for woolworths in victoria, really tried to crack down but its just to hard with the laws in effect. Dad buys 4, mum buys 4, son/daughter buys 4 (even if there 5), friend buys 4 and so on…
Go to carpark to change shirt/ jacket, repeat…

Not defending the supermarkets btw, should be 1-2 cans in metro area + use a basis like cigarettes i belive.
Show I.D to purchase then get it out behind counter, ensure same name does not come up 2 times a day. Understood they can go to another market but by making it tougher we can make it more readily available for everybody.
Sorry to rant, working there that was one of the biggest stresses trying to manage.