Australian retail brands continue to be hit by fake text message and email scams that claim to offer shoppers free gift cards, with hundreds of thousands of dollars lost each month through these “unexpected winnings” schemes, according to the consumer watchdog.

This week the big supermarkets have again been directing shoppers to report the fake offers to the Australian Consumer and Competition Commission, responding to concerned shoppers on social media.

Reports of fake offers across email and social

Shoppers at Coles and Woolworths have been taking to Facebook to ask whether gift card offers that have been sent to their emails and phones are legitimate, with the supermarkets quick to apologise that they are the work of scammers, and should be referred to the ACCC.

Shoppers this week have been particularly concerned about an email purporting to be from Woolworths, which references last week’s payments error that resulted in some customers being double charged for groceries. 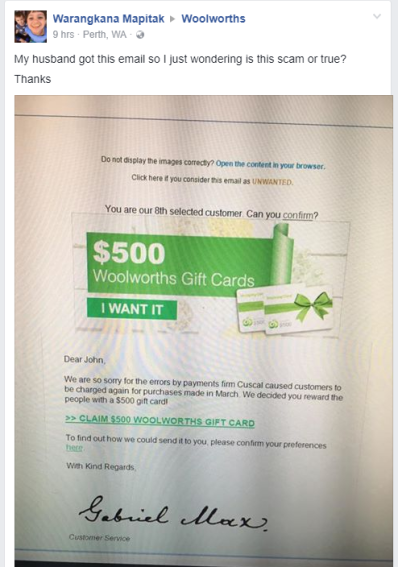 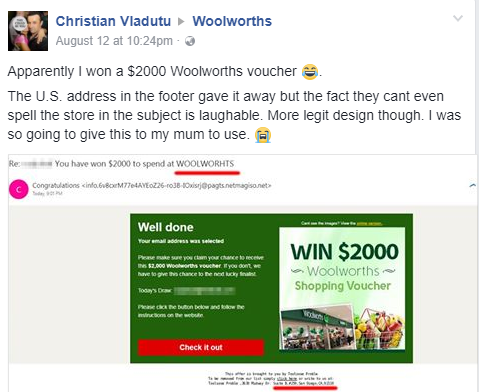 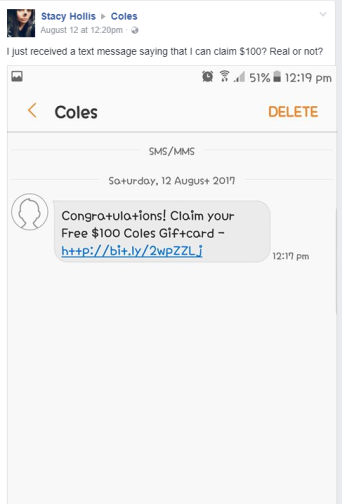 Some Facebook users say they’ve received short text messages purporting to come from “Coles”, which prompt customers to click on a link to claim a prize. Other messages offer store credits of up to $2000, informing shoppers they have been “selected” as a winner.

“This has no association with Coles in any way. We would appreciate you reporting this and any similar emails you may have received to the ACCC,” the Coles social media team told customers when they asked about the $100 gift card text via Facebook.

Meanwhile, Woolworths customers have been referred to the retailer’s “Scam Alerts” page, which includes screencaps and advice on scams that are currently making the rounds.

Shoppers are encouraged to report any suspicious activity to a Woolworths “hoax” inbox and reminded that Woolworths will never “send you an email asking you to click on an attachment” for any reason.

SmartCompany contacted Woolworths for comment on the latest email in particular, but was referred to general advice to shoppers not to click on any links promising prizes.

Coles also has referred SmartCompany to a similar portal that lists warnings to shoppers about scams related to the Coles brand, with customers reminded never to fill in personal information if promoted by a message.

Prize-related scams on the increase

The continued prevalence of voucher offers come as the ACCC reports an increase in the number of prize-related scams coming from text messages, while cybersecurity experts say the threat to businesses from “brandjacking” scams is escalating.

Other retail brands, including Aldi, IGA, Myer and David Jones have all been hit by similar impersonators in recent years, but the statistics suggest the way these are being targeted could be changing.

In July 2017, Australians lost $127,000 in reported cases of unexpected winnings and prize scams, with 47.2% of these coming from text message offers. A year ago, consumers lost $133,000 from these kinds of schemes, but only 13% of the scams came in the form of a text message.

Overall in 2016, Australian consumers lost $1.5 million to unexpected prize scams, with 18% of these coming via text message. So far this year, Australians have lost $1.02 million, with 24% of reported scams coming via text.

Earlier this month, cybersecurity firm MailGuard said the number of attacks that imitate brands are no doubt increasing in “frequency and sophistication”. Citing a number of recent fake bill scams, including one using the name of Origin Energy earlier this year, MailGuard chief executive Craig McDonald said even when customers aren’t actually getting ripped off by the scams, they still represent a cost to businesses.

This is because of the sustained effort needed to protect the reputation of your company when someone else tries to impersonate it, as well as the “drain on resources such as call centre and tellers, and taking action against the illegitimate domain impersonating your company”, he said.

You can’t fight it — but don’t ignore it

There is no way your company can stop scammers from impersonating your brand, but using that as an excuse not to acknowledge scammers is a mistake, says crisis communications expert Nicole Matejic.

“I think we’ve seen a couple of airlines in the past trying to put their head in the sand about these kind of scams. Then people get angry at the brand anyway,” she says.

However, maintaining constant messaging from your brand’s headquarters about every potentially fraudulent text message is time-consuming, so Matejic says companies should look to leverage the advice given out by government regulators whenever possible, so that their customers are reminded to be vigilant overall.

“Leveraging what police are saying about scams is really good, and that is more powerful than coming out and trying [to fight it] yourself. So educate, create awareness and use opportunities like the police, the ACCC and the Australian Communications and Media Authority when you can,” she says.