Jack Scott and Alex Wright have an ambitious goal to catapult their unconventional sparkling water into the top position in the Australian market, and with a distribution across hundreds of Woolworths stores and independent retailers, the UK duo are well on their way.

Scott and Wright are the founders of Dash Water, a UK brand created in 2017 from a desire to combat food wastage that has earned the duo a spot on Forbes 30 Under 30 list in Europe.

Dash Water is infused with ‘wonky’ fruit and vegetables, or fresh produce with imperfections that would not normally make it to the supermarket shelf.

The company sold more than 10 million cans of its naturally flavoured, sugar-free drinks in 2021, including around 1 million in Australia, and it hopes to double those figures in 2022.

Australia is now a key focus for Dash Water, which has spent recent months establishing its local production and distribution arrangements.

Soon, all Dash Water products sold in Australia will be made from locally sourced ingredients, from Australian spring water, to fruit sourced from four local farms and recyclable cans made in Victoria. This will be the first time Dash products will be produced locally outside of the UK.

These products are available from 800 independent retailers and 700 Woolworths stores, with Scott telling SmartCompany the brand hopes to find a way onto Coles’ shelves too. There are four flavours in the current Dash range, with a new mango flavour set to be launched with Woolworths soon.

Scott says the brand is hoping to replicate its success in the UK, where it has around 7000 stockists, in addition to another 1000 stockists across 10 other markets. 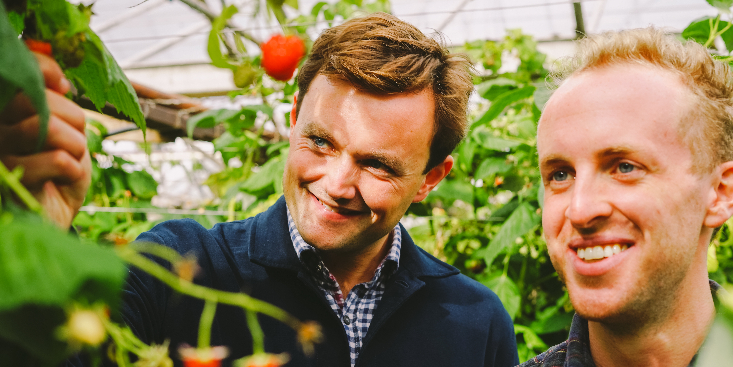 The UK and Australian drinks markets are similar in terms of trends, he says, but Australia has a number of distinct advantages.

“The Australian consumer, I think, is more health conscious, so looking for ‘better for you’ products. And Dash is obviously a healthier alternative to the normal sort of sugary-filled or artificially sweet [soft drinks],” Scott says.

“So we know with the health trend so apparent in Australia, that would help us with the growth of Dash in Australia.”

And, Scott says, the warmer summers in Australia means the climate “is better for a soft drink company”.

“With the nature of soft drinks, a lot more people have soft drinks when it is hot outside for refreshment and hydration factors.

The third factor that led the Dash team to select Australia is the similarity in trends in the drinks market here, compared to the UK.

“America might be ahead with certain food and drink trends, but what we found is in Australia, the category of flavoured, infused, sparkling water is at a similar stage [as the UK], so there was great opportunity for us to grow in the category,” says Scott.

“In America, for instance, it is very, very competitive, and there are hundreds of sparkling water brands. Like what we’ve done in the UK, where we’re the number one water brand, we want to do the same in Australia and there are a good amount, 25 million people, to target.”

Scott says the Dash team also has a close relationship with the team behind Remedy Kombucha and has been inspired by their success in Australia.

Dash Water is a B Corporation, and Scott explains that means adhering to the strictest sustainability practices.

Indeed, sustainability is a core value for the brand, which was founded when both Scott and Wright drew on their farming backgrounds in the UK to develop a way to combat food waste. The pair had worked together at a larger drinks company and as Scott puts it, they “saw a gap in the market” to build a great, sustainable drinks brand.

While the fruit used in Dash Water may be unfamiliar to many supermarket shoppers, Scott says using imperfect food products doesn’t mean compromising on taste.

“The cucumbers might be overweight or have blemishes on them, or have been grown in a funny way … [and] we’re able to take those cucumbers and infuse our water, and the taste is the same.”

In the UK, the brand worked with farmers to create video content to help communicate this value to consumers and “it really cut through”, says Scott.

The description of fruit as “wonky” is inherently visual and Scott says the brand has had fun playing on this in its social media, email marketing and point of sale promotions.

“It certainly sparks interest and people want to find out more,” he says.

For its team of 16 people (one of whom is based in Australia), setting up operations in another country during a global pandemic was not without its challenges for Dash Water.

Not being able to travel to Australia led to many “long nights and early mornings” speaking with manufacturers, says Scott, but pulling off the feat led to “huge satisfaction” among the team.

And then of course there are the usual challenges of expanding your business to a location on the other side of the world, where time barriers mean “things tend to take longer, conversations are drawn out”.

Scott admits sourcing some of the fruit in Australia has not been straightforward without the same network that Dash has with farmers in the UK, and the brand was forced to use a different size can for its Australian drinks when its first choice wasn’t available.

“It was all stuff we got through, it just took longer than anticipated,” he says.

Tim O’Sullivan has been able to convince the likes of IGA and Foodworks to stock his first product business Bae Juice just 18 months after first developing the idea.

The power of a cuppa: How two Melbourne founders got their ‘world-first’ tea brand into Woolworths