Founded by advertising strategist Sophie Lawrence, pastry chef Charlotte Haygarth and Hockeyroo and Olympian star Jayde Taylor, Denada has grown from a soft launch in 2017 to its product being stocked in 1,250 stores nationwide.

The business — which achieved 364% annual sales growth and over $3 million in ice cream sales last year — has recently expanded to Spinneys stores and Waitrose supermarkets across the UAE.

“[Spinneys] saw growth in the ‘better for you’ ice cream brands, our values really aligned and they placed an order the next week. It was a quick and exciting process,” Lawrence tells SmartCompany.

“They took all six flavours and had a shelf of freezer space dedicated to Denada which looks impactful, and gives us the best chance to be seen by consumers.”

This follows an expansion to Coles supermarkets in 2019 which, Lawrence says, happened at a time when the ‘better for you’ ice cream market was beginning to take off.

The business rapidly expanded its production from 800 tubs at a time to 60,000 tubs each month.

“The [Coles] category manager at the time was eating Denada, loved the product [and] we managed to get three SKUs [stock-keeping units] on the shelf,” she says.

“It was always a dream to get into one of the main supermarkets and it came sooner than expected, which was amazing, and hurried up the course of our business.

“It also showed a readiness for sugar-free products in the mainstream market.” 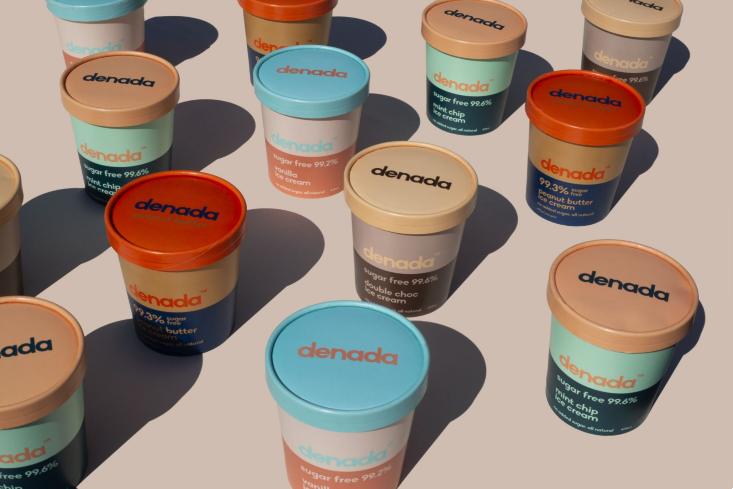 Like many small businesses, Denada began with someone tinkering in the kitchen.

Lawrence says that co-founder Charlotte Haygarth had decided to go sugar-free, and was not happy with the desserts on offer. She experimented with a range of ingredients and landed on an “amazing ice cream formulation”.

While other ‘better for you’ ice cream brands such as Halo Top and Pana focus on calorie counting, protein infusion and other specialities, Denada’s distinctive feature is its emphasis on a sugar-free product.

Haygarth approached Jayde Taylor — who was following a ketogenic diet — before consulting Lawrence for brand advice. But Lawrence says she “became so invested in the idea that I quit my job and became involved”.

The West Australian trio started manufacturing at the start of 2018 and, by the end of the year, they were distributing to stockists nationwide.

“Initially, we were looking at a number of different ways to raise investment and capital. We went to venture capitalists and different networks around Perth, but [ultimately we] put up our own capital in the business,” she says.

“We have been lucky that we haven’t had to seek outside investment which enables us to have agility, make our own decisions and go with our gut a lot of the time.

“But there may be a point where we’ll need to seek external investment to scale up.”

Denada hasn’t seen a lot of downturn attributed to COVID-19.

Lawrence says panic-buying, strategically placed promotions and a broad target audience has helped the business through an uncertain period.

She adds that the vision is still to expand to other markets — including the UK and the US — and create a product line that goes beyond ice cream.

That may include chocolates, lollies and baked goods but it “depends on what Charlotte cooks up in the kitchen, and whether we can commercialise it”.

“You have to have your goals in order to be able to reach them.”

NOW READ: “A house of cards”: Why KeepCup is taking a harder line on single-use items

NOW READ: The COVID-19 pandemic is fuelling a boom in the plant-based food industry and Australia has a role to play

This article is supported by the Judith Neilson Institute for Journalism and Ideas.