The Department of Employment has offered to run a number of job transition support sessions for Dick Smith employees across Australia in a bid to help them find work elsewhere.

The sessions are free of charge and will run for approximately two hours outside of employees’ usual work schedules.

One of the posters reads, “When are we closing? How long is a piece of string?”

Another reads, “When your last day? What is the last digit of pi?” 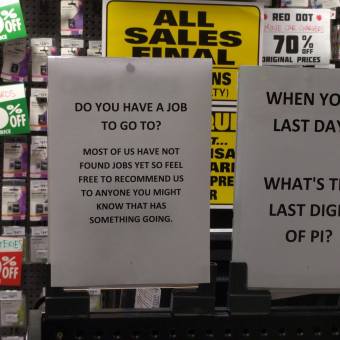 One Dick Smith employee told SmartCompany the signs were being put up at various stores due to a sense of frustration among staff.

“It’s the most common question we get asked,” the employee said.

“We’re getting very frustrated because people keep asking when we’re closing. A lot of stores were putting those signs up when we were told not to.”

Employees are annoyed at constantly having to field questions from customers and are upset because they do not know when their workplace will shut its doors for the final time.

This means if non-casual staff find employment elsewhere during the fire-sale period, they may have to choose between accepting the new position or getting paid their outstanding entitlements.

“I know a few store managers have gotten jobs, but it feels a little more difficult for everyone with a bit less experience,” the Dick Smith employee says.

“We were expecting our store to be closed by now, but they are still sending [remaining] stock out.”

Staff were told this morning that Dick Smith’s website will become non-transactional as of tomorrow, with electronics retailer Kogan then taking the reigns.

Dick Smith outlets are expected to close in the next four weeks.