Thousands of Pizza fans are questioning the “market research” that went into Domino’s signing a six-and-a-half year exclusive distribution deal with Schweppes Australia that will leave Coke fans out in the cold until 2024.

In September, the multimillion-dollar pizza chain informed customers it would roll out a new range of drink products across the country, delivering to a “devoted and loyal” fan base of Schweppes customers.

However, this week the reality of that deal has set in with Domino’s customers realising it means Coca-Cola products will not be available from Domino’s for the period of the exclusive drinks deal.

The business has since seen a tsunami of passionate pleas to get Coke back into fridges.

In one Facebook post, which now has upwards of 30,000 reactions, a customer said the decision “sickens me”.

“Whoever the peanut was that decided that this was a good choice should be fired immediately,” the customer wrote.

Domino’s is also copping heat for its reaction to concerned customers on Facebook, with many being assured that the decision to enter the Schweppes deal was undertaken after market research was completed for the business. 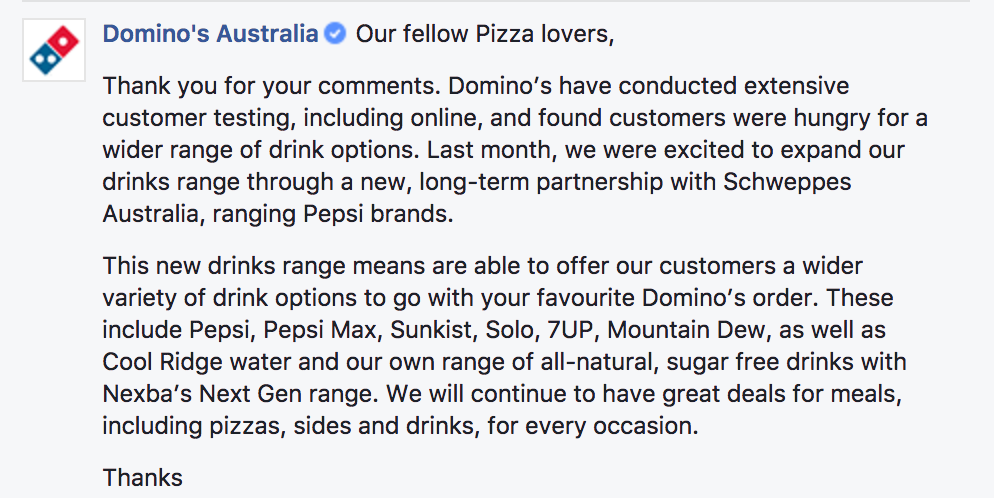 The chain also highlights that Pepsi Max is the category leader in Australia’s no-sugar cola market by sales volume.

“Well this decision was obviously a bad one,” one angry customer responded to the social media team’s standardised response.

Other customers threatened to abandon the brand altogether, claiming there are plenty of other options to get their drinks of choice at other pizza providers.

In a statement on the Schweppes deal, Domino’s Australia and New Zealand chief executive Nick Knight said the business was excited to be offering customers “more choice” with the move.

SmartCompany contacted Domino’s Pizza Enterprises for further comment on the customer reaction to the decision, but the company said it did not have further comment to make.

The pizza wars are a fierce game in Australia, and retail experts have previously told SmartCompany businesses like Domino’s are always workshopping new ways to put desired products in the hands of their customers as soon as possible.

However, even with this eye on innovation, Domino’s and other food businesses are no strangers to the passionate “open letter” from fans when something upsets them.

The pizza chain has faced social media backlash in the past, including at the start of 2017 when pizza fans let their anger fly after the company decided to introduce a Sunday surcharge for delivery orders.

Director of CP Communications Catriona Pollard says at this stage in the game, businesses like Domino’s should be well-versed in drawing “powerful information” from Facebook posts and open letters about products.

“What customers now have is a voice, and for brands, what’s in that is probably really valuable information for them,” she says.

Facebook letters addressing brands are becoming more and more sophisticated, and the reach of these messages can be significant. The feedback doesn’t necessarily even have to be negative. Last month an ode to “miracle” cookies produced at Woolworths garnered 30,000 Facebook engagements.

As this becomes the norm, Pollard says brands need to also step up their response to these communications. In the case of Domino’s Pepsi decision, she says the chain should be reaching out to each detailed letter in an individual way.

“There are a million ways of getting takeaway now, and so in this case there’s a real chance that people will want to swap pizza brands, if they love Coke that much,” she says.

“In this case, they have already made the decision, but every one of those open letters needs a detailed response.”

Pollard highlights that in this case, the decision to switch soft drink brands is not a “true crisis”. She thinks Domino’s could turn customer concerns into an opportunity to get more people on board, through strategies like offering free Pepsi products with pizzas for a limited time to get customers acquainted with the new offerings.

However, too often businesses shy away from these opportunities the minute someone criticises them online.

“These situations should actually be flipped to opportunities, but I think lots of brands are missing these opportunities.”

Considering the last time I had Dominos I got home with the pizza and there was still cheese powder on the top – unmelted. It was still borderline for edibility even after I had put it in the oven to melt the cheese powder. I rate them as I rate Red Rooster – would never eat there again.

or they can do what I will do, use the discount coupon codes you get emailed to get your pizzas at the best price, if you want sides use a coupon and then switch out the soft drink and get a different side choice. Pick up your drinks on the way home from the supermarket and get the drink of your choice at a better value anyway. It’s not that difficult to prevent dominos from making choices for you!

How good we have it in this country when this is the kinda stuff we have to get upset about.