Australia Post is investing in new delivery infrastructure to keep up with soaring parcel volumes.

Australian e-commerce has once again exceeded market expectations, with industry revenue hitting 10% of total retail turnover last year, a major milestone which has come a year faster than predicted.

Releasing its closely watched annual e-commerce report on Tuesday, Australia Post has flagged increased spending on its delivery network in the coming years to keep up with soaring parcel volumes.

Australians spent $27.5 billion online in 2018, a 24% increase on the year before, as about 7.6 million households (73%) opted for computers over shopping centres.

The findings are an indication Australia’s e-commerce boom still has a way to run, but as established and international players increasingly lean in on the vertical, competition is heating up.

Declaring 2018 the “year of the sale” in its report, Australia Post found last year’s Black Friday and Cyber Monday shopping period was the biggest online shopping week in Australia’s history.

Purchase volumes spiked in the five weeks from November 11 to December 15, accounting for almost 15% of all e-commerce transactions for the year, while Black Friday was the standout, driving a 28.7% spike in year-on-year purchases.

But while volumes are skyrocketing, the increasing prevalence of discounting holidays is prompting reflection about the direction the industry is headed in.

Dean Salakas, chief executive of retailer The Party People, says the growing popularity of retail events is changing the strategic landscape for businesses.

“We’re moving towards this theory of near-perfect information, where online customers can search for the cheapest product or the fastest delivery,” Salakas tells SmartCompany.

Salakas says the e-commerce industry has focused on chasing volume and market share, but profitability is still escaping many fast-growing brands, a retail philosophy amplifying margin pressure across the industry.

“Everyone is chasing volume and market share,” he says.

A separate Paypal survey of 1,000 Australian consumers was also released on Tuesday, finding seven in 10 shoppers actively seek out online sales or discounts, while 50% have waited until an item was on sale before buying it online.

Concluding discounting is driving e-commerce revenue, Paypal found 58% of respondents made an impulse purchase online in the last quarter because something was on sale, buying an average of 2.7 items valued at $108.

Franzi says margin pressure is increasing for online retailers, with “massive discounts” and a move towards higher-cost services such as same-day delivery making things difficult.

“If I look at all the trends going on in e-commerce at the moment — the rise of sales, the buy-now-pay-later trend, what I affectionately call the ‘need for speed’ — it all continues to put margin pressure on the actual merchant.”

The discount drug has been the subject of tough conversations among bricks-and-mortar retailers in recent years, particularly as big brands such as Myer have struggled to deal with an inability to get customers to pay full price.

Margin difficulty has been blamed by prominent retail executives for poor profit results, while many smaller traders have struggled to keep pace with the big brands.

Australia Post invests to keep up with e-commerce boom

On the delivery side, Franzi says the government-owned postie will invest about $1 billion in the next few years to keep up with growing parcel volumes.

“We need to take a look at different models of transport,” he says.

Next-day deliveries grew by 30% in 2018, while demand for same-day delivery is also on the rise as retailers begin to crack the last-mile challenge.

Franzi says retailers will need to increasingly switch to order picking in waves throughout the day instead of sending in bulk at close of business if they want to keep up with the rising tide.

“You can’t run a big national warehouse, pick your orders throughout the day and then give it to a carrier,” he says. 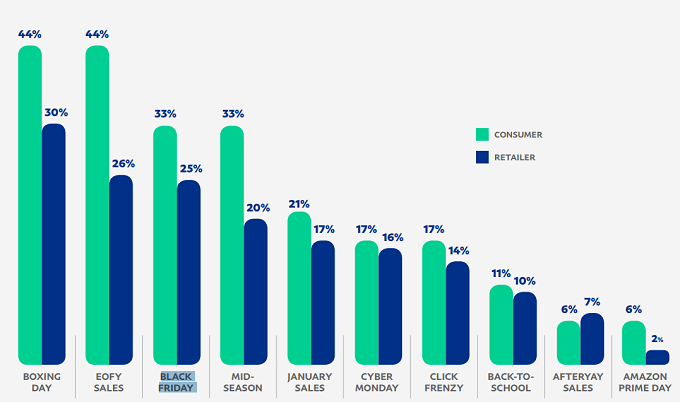 NOW READ: ‘If I don’t, someone else will’: Discounting dilemma for SMEs as Christmas closes in