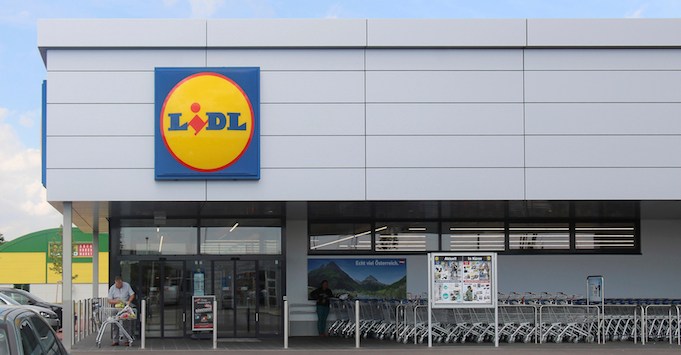 A Lidl store in Vienna, Austria.

European discount supermarket chain Lidl has spent the last week dealing with furious customers on social media after shoppers called the chain out with claims it had doctored an image of a Greek Island on some of its dairy items to remove the religious cross of a famous church.

Reuters Frankfurt reports the supermarket has since apologised for the packaging confusion, after shoppers raised the issue more than a week ago upon seeing something not-quite-right with the packaging for its private label “Eridanous” range of products. 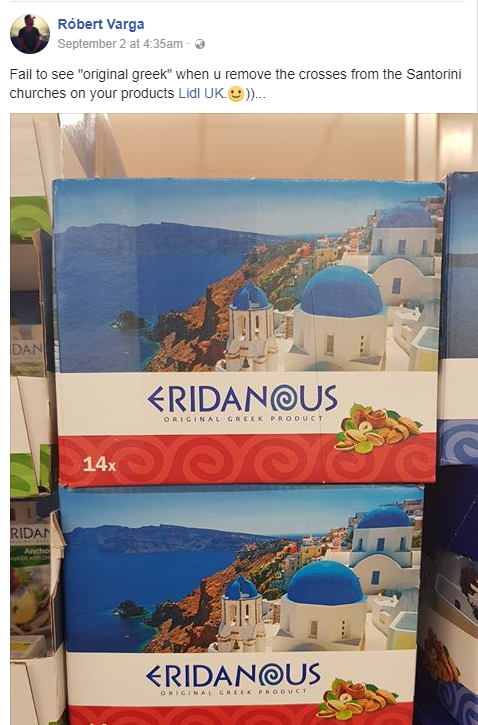 The packaging features the well-known Anastasis Church in Santorini, Greece, but does not include the crucifixes on the building’s blue dome and surrounding building.

The products were available across several European stores including Lidl’s in Belgium, Germany and the UK, it’s understood, and The Telegraph reports initial statements from the Belgian arm of the company suggested Lidl had a policy of “avoiding” religious symbols in packaging.

“We are a company that respects diversity and this is what explains the design of this packaging,” the initial statement said.

According to the UK’s Daily Mail, a German Lidl spokesperson also said the grocery chain has a policy of avoiding religious symbols on product packaging “to maintain neutrality in all religions”.

However, the UK arm of the business has simply apologised to shoppers and said a redesign of the packaging is underway.

revising the packaging design as soon as possible. 2/2

The UK Facebook page for the discount chain has also responded to countless shoppers with the same standard response.

However, social media expert at CP Communications Catriona Pollard says the unusual nature of this branding story makes it critical that the business explain exactly what happened in this case.

“In this case, what you would have to say is, ‘We’re sorry we offended people’, and also say ‘the reason for this [decision] was XYZ’,” she says.

Lidl, a rival of German discounter Aldi, has long been rumoured to have Australia in its expansion sights, especially as its sister brand Kaufland prepares for local operations.

Take care with images for the good of your brand

Pollard says the image-heavy focus of many social media platforms means the kind of images businesses choose to put on their packaging and marketing is more critical than ever, but companies should remember not everything is fair game.

If a business finds itself in a situation where it is considering using famous landscapes to promote products, especially if the consideration is around altering these images, it should think about the emotional impact, she says.

“In this case, the business is actually changing the landscape of a particular place, and in this case, the issue is maybe they shouldn’t have used that image in the first place,” Pollard says.

Beyond this, businesses must also understand the connection between emotion and social media, and be prepared that branding decisions relating to religion are likely to cause extended outcries on social media.

If a company is facing a sustained period of criticism online because of a branding decision related to religion, the best thing it can do is explain itself quickly, she believes.

“A brand needs to make a statement around inclusivity and make clear that people’s beliefs are respected,” Pollard says.

SmartCompany contacted Lidl’s UK operations but did not receive a response prior to publication.

Note how Lidl addresses the issue of removing the cross but is silent on the halal symbol.

To Pollard: It is NOT “inclusive” to remove a cross from a landscape.

The word “inclusive” has now become so perverted, that it now means pandering to certain groups of people, at the expense of other less important people. Don’t you shiver when you hear that word now?

The stupidity is that it was a part of the landscape. it wasn’t an artificially inserted motif that was removed, it was PHOTOSHOPPED OUT. That really is stupid.

Good on them for this, if religious zealots miss their crosses, they should go to church more often, I mean FFS whining over a label… and I thought I had no life LOL

Did you even read the article or just vent off like the tools that are driving people to vote no?

They left the islamic symbol in, you bigot.