As Aldi goes upmarket and Kaufland fades from memory, the cost of groceries is going to increase

Australian shoppers — and politicians — may be about to get a very unpleasant cost-of-living shock.

Coles supermarket just reported its official results, and buried below its impressive $930 million profit is some bad news: grocery prices are rising again — faster than official inflation, and faster than wages.

“Cost inflation was largely a result of increases in tobacco due to excise, dairy following milk cost price increases earlier in the year, and vegetables, with some lines impacted by weather conditions such as drought, bushfires and storms.”

Some of these factors look like one-off events, but food inflation is a rising phenomenon.

Rising grocery prices have almost been forgotten by Australians. They are something we have not had to deal with for a long time.

The Aldi effect has kept prices flat for most of the past decade. The German discount retailer brought vigorous competition to the sector and forced Coles and Woolworths to react.

Remember the ‘Down, Down’ campaign? Remember dollar milk? That was a response to the unfamiliar spectre of price competition haunting the grocery aisle.

As the next graph shows, between 2011 and 2019, grocery price inflation was below zero more often than it was above 2%.

When you add up the total price change of food and non-alcoholic beverages over those eight years, it was just 7%. 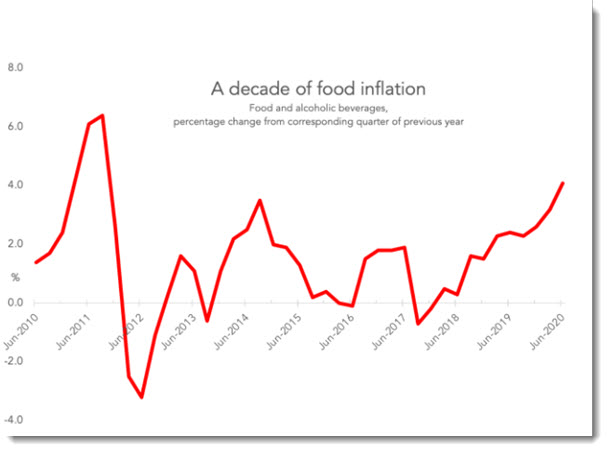 But now Aldi is revamping its supermarkets to look more upmarket. It is emphasising quality and is not quite so eager to fight on price alone.

Meanwhile, Kaufland pulled out of its planned Australian expansion.

The PM and the price of eggs

The cost of living is reliably a top issue for Australian voters. This is true even when it is falling.

For years, inflation has been confined to house prices, rents, electricity bills, insurance premiums, and an occasional spike in the price of petrol — each of which has been enough to cause a political brouhaha.

But inflation is nibbling away at our purchasing power at the checkout.

Food is a whole other thing entirely. Not only do we spend about 16% of our weekly budgets on food, but we notice that expenditure very much and we can’t avoid it.

Groceries are a bit like electricity bills in that respect. The price is very clear and the alternatives are hard to find. We all have to eat. Price rises seem unfair and that makes voters cross. (This is asymmetrical, politicians don’t get credit when prices are flat.)

The cost of food has been a political issue since basically forever. Bread is a vital part of that staple recipe for stability: panem et circenses.

In poor countries rising food prices cause riots and even civil wars.

In rich countries rising prices simply cause politicians to endlessly mouth slogans about the cost of living, for fear of seeming out of touch.

The prospect of inflation at the checkout is always unwelcome. But in our current economic environment, it could be political dynamite.

In 2021, when the dust of the pandemic begins to settle, we will find ourselves with 10% unemployment and rising prices for food are likely to be centre stage.

Expect to see Scott Morrison and Anthony Albanese doing photo opportunities outside supermarkets as they clamber all over each other to prove how well they understand the impact of the cost of living on the average Australian family.