Honey Birdette “flash mob” for marriage equality divides customers: Is it time for your business to take a stance?

The managing director and founder of lingerie brand Honey Birdette has acknowledged the much-discussed brand is “polarising”, but has dismissed criticisms of its recent “flash mob” in support of marriage equality.

On Monday, a group of 60 Honey Birdette employees and models took to the streets of the Sydney CBD in support for marriage equality ahead of the federal government’s controversial postal plebiscite on the topic, with forms slated to arrive in Australians’ mailboxes on September 12.

The Honey Birdette workers and lingerie-clad models walked from Pitt Street Mall to Martin Place on Monday, carrying signs with messages of “make love not plebiscite” and “#freethenipple”. The company live-streamed the event on Facebook, drawing messages of both support and criticism from customers.

“Incredibly disappointed in this poor excuse for a rally or a protest. There was no chanting, no message, no information other than a few signs. No passion,” wrote one commenter.

“Where was the inclusiveness? Seems more like an attempt at a marketing campaign than a protest.”

However, a number of fans offered messages of support for the business, with one customer saying “[I] love a company that can form an opinion and hold itself accountable for issues affecting its employees/ customers and affiliates”.

Speaking to SmartCompany, Honey Birdette founder and managing director Eloise Monaghan says she was unfazed by criticisms of the flash mob, explaining that while Honey Birdette can be a “polarising” brand, she was pleased the action had sparked “good debate about what’s happening out there”.

“We could have taken the comments down but we didn’t. Everyone’s entitled to their opinion,” Monaghan says.

“Marriage equality is a basic right and the government should have nothing to do with it in terms of getting people to vote in a national plebiscite. It’s a ridiculous decision, Turnbull has been to every Mardi Gras.”

The inspiration for the flash mob came from issues the company experienced last week, after a store in Adelaide received complaints about a revealing poster promoting the brand’s lingerie. Monaghan says the store was vandalised as a result, and the experience led to her to organising the flash mob to empower her workers, as well as support marriage equality.

“A flash mob was a way to let our team get involved and it was also the quickest way to get our message out there and let people know how we felt about marriage equality,” she says.

“We’re a very passionate group of women, so after we had a meeting about what happened in Adelaide, I got on the phone to my PR girl and said ‘let’s do this’.” 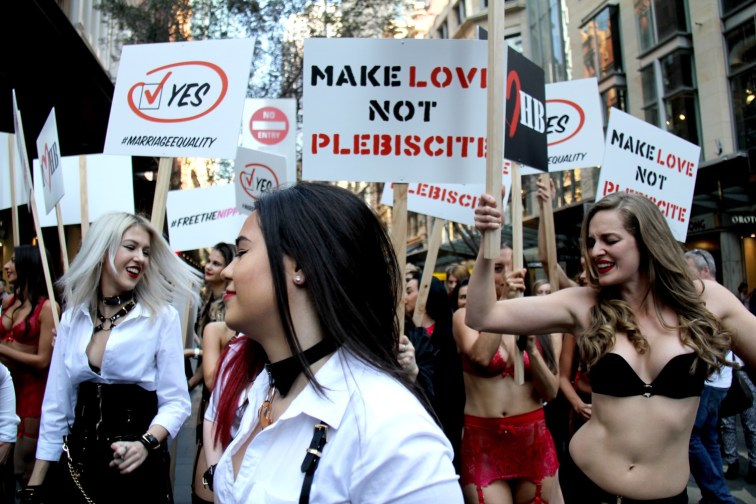 Honey Birdette has previously come under fire for allegations of inappropriate working conditions and workers not being protected from sexual harassment from customers. Last year the company was questioned over an employee handbook that directed workers to say “vulgar” phrases to customers such as “we are all purveyors of modern sauciness”.

However, Monaghan dismisses the claims as “absolute rubbish”, labelling the concerns a “trolling campaign” run by disgruntled ex-staff members.

“There is no sexual harassment in Honey Birdette,” she says, explaining the company has been working with the Australian Retailers Association and Worksafe for the past 12 months, achieving an “A+ rating”.

Monaghan says the company is continuing to campaign for marriage equality through posters in its stores but is undecided about whether it will hold more flash mobs, saying “we have a business to get on with”.

“The last one came purely out of passion, so I can’t tell what the future holds,” she says.

Businesses should not be afraid to take a stance

Director at Marketing Angels Michelle Gamble believes more businesses should be willing to come out in support of marriage equality, telling SmartCompany while business and politics can be a “murky area”, she believes the debate has gone beyond politics.

“It’s beyond a political statement, it’s about civil rights now. It’s okay for brands to take a stance, and doing so can actually strengthen loyalty,” she says.

“Clearly Honey Birdette wants to put their brand out in support of marriage equality and that’s a positive thing. As much as it should be based off your target market, when 70% of the population supports marriage equality, you’re probably safe.”

“Make sure you know how it aligns with your brand’s values, and make sure you’re ready to respond, as people will want to talk about it if you do take this stance.”

IMO this is sexual objectification of women by women. Hard to see how this advances the feminist cause.

This is just another example of gurrella marketing. Just trying to get lots of eyeballs on their brand for little costs.They made it here so mission accomplished

Money first, ethics last – the way of so many in the business world.

Shameless self-promotion and social-washing (similar to ‘green washing’ but piggybacking on a social issue) by a brand that promotes women as submissive to men, both through their retail operations and products; doesn’t care if they expose their sexual messages to children; refuses to comply with community standards in their advertising; and used to lying through their teeth through every facet of their operations.

I mean, if the unions have issues with the way they treat their employees, given their social messaging, you KNOW they’re doing it wrong.

Oh, and they also want to go around censoring people. Classy. So they haven’t changed their ways on respecting others’ rights and freedoms.