In their efforts to identify disruption, many business leaders reach for a metaphorical telescope. They seek out research, forecasts and experts who can illuminate what lies beyond the distant horizon.

While this long-range perspective can be of value, my strong recommendation when working with clients is to set aside the telescope and instead reach for the wide-angle lens when identifying disruptive threats. After all, it is the outliers, the unconventional competitors and the unexpected new industry players that have proven most disruptive time and time again.

Klaus Schwab of the World Economic Forum agrees. In his book The Fourth Industrial Revolution, Schwab warns business leaders to “consider their biggest threat to be competitors that are not yet regarded as such”. In other words, Schwab challenges leaders to regularly ask themselves: who are the new entrants or the players in parallel industries who may not be on your radar yet as competition but could become so in the blink of an eye?

Recently I was doing some strategic planning work with the team who head up distribution for one of the world’s largest grocery FMCG companies. As our discussions turned to the theme of future trends, I asked which new approaches and competitors had the greatest potential to disrupt their business model.

This drew a blank. I pressed further and asked the group if they foresaw any ways in which automation technology specifically could pose a disruptive threat to their business model.

After some superficial discussions, one of the attendees boldly declared, “Well, someone’s got to get our products from point A to point B so our warehouses, trucks and delivery people are hardly going to disappear any time soon”.

Then I shared the details of a patent application made by Amazon just two weeks earlier and the room went very quiet, very quickly.

This patent application was for what Amazon referred to as an “Airborne Fulfillment Center”.

These massive flying warehouse “blimps” would hover above metropolitan areas at an altitude of 45,000 feet. When a customer makes an order via their smartphone, a drone would promptly deliver the ordered item directly to the customer in minutes.

As I described Amazon’s plan, my audience quickly understood that automation of this kind had the potential to disrupt them enormously — even cutting them out of the product distribution process altogether. Walmart are certainly taking the threat of this disruption seriously, having lodged their own patent application for airborne fulfilment centres in late 2017. 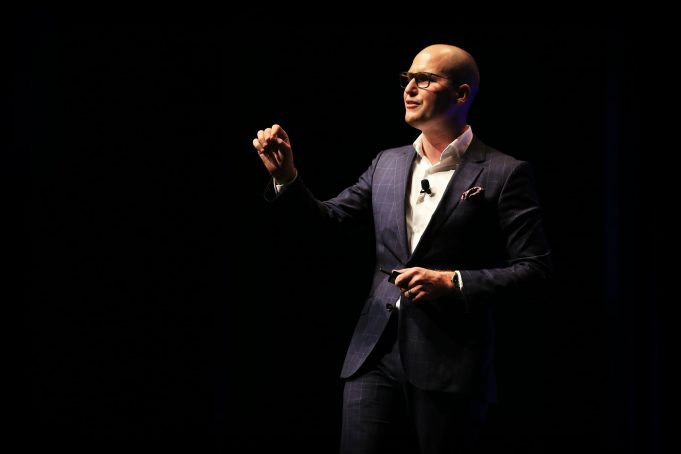 As consumers, this new form of product delivery via drone will change the shopping experience forever. But it’s not all just about airships and drones.

The US state of Virginia recently passed a law allowing delivery robots to operate on footpaths and street crossings. Under the new law, robots will not be able to exceed 16 kilometres per hour or weigh more than 23 kilograms but they will be allowed to operate autonomously. Companies such as Marble, Dispatch, Postmates and DoorDash are leading the way in making delivery-to-the-door robots — a reality that also has the potential to enormously disrupt the freight and logistics sector.

Regardless of the industry you are in, ignoring, dismissing or discounting disruptors is never going to end well. In the same way, fighting unconventional competitors or trying to leverage your power and size to lobby regulators to protect the status quo will only work for so long. It’s like trying to hold back the tide; the pressure will grow to a point where you can contain it no longer.

Rather, a posture of openness, curiosity and alertness to the periphery is vital for any organisation or leader today. Remember, it’s the wide-angle lens rather than the long-range lens that will serve you best in identifying the disruptors you cannot afford to ignore.

NOW READ: Here are the words Jeff Bezos relies on for motivation every morning

at such as 16 kms per hour; wait till all the lawsuits start with such as property damage, personal injuries etc plus vandalism and theft of these robots