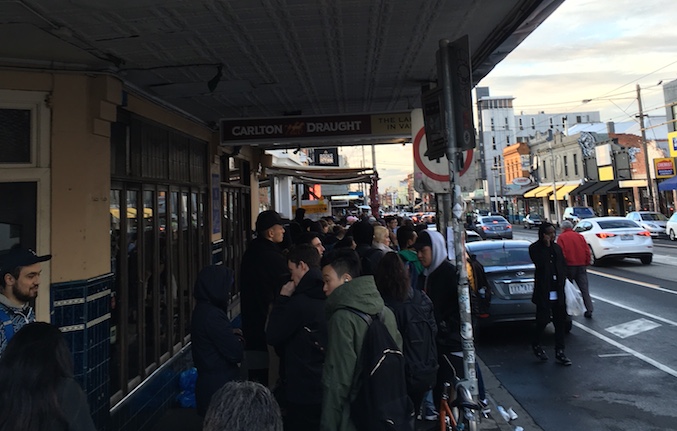 Kanye West fans are telling a Melbourne business owner she should “jump off a bridge” after she posted a now viral message to the rapper’s Facebook page, telling him that his The Life of Pablo pop-up store had blocked customers from her business and knocked thousands of dollars off her weekend trade.

Zetta Florence owner Charlotte Knightley came to work at her Brunswick Street store last Friday morning to find eager Kanye fans sleeping in her shop’s doorway, awaiting the weekend opening of the pop-up store next door. This was the first she had heard of the pop up’s existence, and over the next two days the Zetta Florence shop front was blocked by lines of people.

“On a usual Saturday we would take around $3000,” Knightley told SmartCompany.

“On this last Saturday, we had about $200 of sales – basically my doors were completely blocked off and there was no way for anyone to get through.”

Knightley took to Kanye West’s official Facebook page in an open letter that she wrote with the help of women in the “Like Minded B-tches Drinking Wine” Facebook group – a space in which 15,000 local Australian businesswomen discuss strategy and support each other. After canvassing feedback on the problem in the Facebook group, she took to Kanye’s wall to highlight the loss of business.

“Hi Kanye, hope you and the fam are well,” Knightley said.

“Now from one retailer to another our customer bases are quite different so when your customers swear at my little old lady customers who are just trying to come in to buy an album to protect their war time treasures, it’s a bit of a problem.”

The post has now been liked over 4,000 times and Knightley says that while she never expected a response from the Kanye camp, she did it to highlight a ‘David and Goliath’ struggle of the small local retailer facing an international brand without warning.

“One of my customers tried to get through the crowds of people with her walker and someone yelled at her. That’s when I thought, no, that’s it,” says Knightley.

While the attention this morning has been good for business, the experience has highlighted that small business owners often don’t have a lot of power when it comes to this kind of disruption – and threats from Kanye West’s customers have driven home the importance of staying lighthearted.

“And until now I didn’t really get trolling online – but since the Facebook message people have been contacting me, telling me to jump off a bridge, getting to a really intense point.

“I now understand how important it is for businesses to play this off with a lighthearted nature.”

Melbourne wasn’t the only site to attract die-hard Kanye fans, with New Yorkers reportedly lined for as long as 18 hours over the weekend, pushing and shoving past security and police when the Tribeca store opened on Saturday.

Zetta Florence has asked for a $6000 reimbursement for the weekend’s losses, but “I just did it to draw attention to the frustrations”, says Knightley.

Doesn’t seem reasonable to claim losses for one dud weekend. What’s next? Ask the AFL to compensate for loss of business on Grand Final weekend? Or the Council when they have dug up the footpath for a week?

Doesn’t seem reasonable that a pop-up biz can open up without making
sure local biz isn’t negatively affected. Police & security were
there but couldn’t get people to form orderly queues? They couldn’t
have ensured that there was a walk-through to local businesses affected?

When
Councils do repair work lasting a week, local businesses are told in
advance and there are pathways laid out. Sure, many customers may wait
to visit until repairs are completed, but at least there was an effort
made.

This business owner was not fore-warned about the pop-up and wasn’t able to make preparations or allowances for it.

The complaint is about lost business for one weekend. Being told in advance would not alter the effect of crowding, lack of parking or access for regular customers. The problem would still have occurred.

AFL Does wonders for local business as the stadium is not in the middle of brunswick street. The local food venues would all stand to profit as well as local accommodation. Pubs profit after the game is over, public transport and taxi services all profit.

Even if it was you are talking about a national sport. Supporting Australian players in a sport that promotes being athletic and motivated. Stupid comparison to supporting Kanye West in making hundreds and thousands off shitty Tshirts.

How did Australian local business benefit from Kanye who is notorious for loving himself and his grossly misogynistic lyrics. He is everything we don’t want this country to represent yet his shitty westie looking clothing store blocks off local stores.