Lessons from Woolworths’ payments glitch: How to soothe customers begging for return of “stolen money”

Woolworths customers are still experiencing an anxious wait for money to come back into their accounts and are telling the retailer the true impact of a payments glitch yesterday goes well beyond the incorrect withdrawals they have seen from their accounts.

Woolworths customers began sounding the alarm on Monday, reporting they were seeing additional unexplained charges on their bank statements that appeared to doubling-up on purchases they made from the supermarket chain in March.

Several claimed the unexpected bills had caused their accounts to be overdrawn or for automatic bill payments to bounce.

A spokesperson for the supermarket has confirmed to SmartCompany “a limited number” of Woolworths customers may have seen incorrect transactions listed on their statements after an error occurred at payment processor Cuscal.

“Cuscal have confirmed they will rectify any payment errors as soon as possible and they have also confirmed that no impacted customer will incur incorrect charges related to the incident,” a Woolworths spokesperson said.

This morning, Cuscal apologised for the “ongoing stress and difficulties” the issue was causing people and promised to have the transactions reversed by 2:00pm today.

However, while customers have been given an explanation of the problem, affected shoppers are starting to flood social media to ask how they will be reimbursed for the flow-on effects of the issue, beyond the original incorrect charges.

Complaints include that the error caused account overdraft fees and left people stranded with the inability to pay for petrol or other goods yesterday. 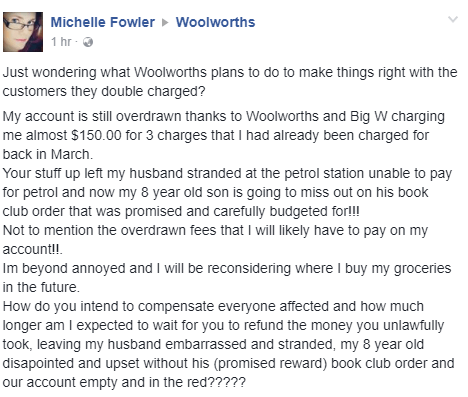 Several shoppers have also questioned why Cuscal and Woolworths store credit card information about shoppers for such a long period of time after a purchase is made.

Branding expert Michel Hogan says while this error isn’t likely to have a long-term impact on the Woolworths brand, there are three big takeaways for SMEs from the situation.

The first is if you are working with a software partner or third party, as Woolworths was in this case, it is never enough to tell your clients an error is the fault of someone else. Instead, you should own up in the first instance.

“The first step is the mea culpa — even if it was an outside vendor’s failure that led to the problem. You made the choice to outsource and who to outsource to, so own that, no matter what,” she says.

Secondly, you should have someone ready to engage with what any outages or problems have meant for your customers in real terms, and have a remedy not just for the initial mistake, but to repair any further problems it’s caused for people’s lives.

“For some people, being charged 300 extra dollars is a big deal. Then there’s the question of things like, ‘what if my bank goes into overdraft?'” she says.

“For Woolworths, this means they will have to be figuring out how to reimburse people for the flow-on effect.”

Finally, smaller operators need to understand that they are not immune to similar bungles, and take the security of their systems seriously, Hogan says. This includes workshopping all the different ways a new process could break down, and having an answer on remedies ready.

“If you’re actually putting in place systems and processes, spend some time trying to break them. Ask, ‘where might this fail?'” she says.

The more severe ramification of this is that so many people are sailing so close to the wind in respect to living costs and bank balances.
The above says retail spend has disappeared outside of essential living costs. It also says credit has been fully utilised.
Dental is gone holidays and entertainment as well.
Have the increases in rent, electricity, gas and water charges killed the goose and the egg with it?
Australia is looking very much like the Spain of Asia.