Victorian Premier Dan Andrews has shaken up the reopening roadmap for metropolitan Melbourne, and while some businesses are facing continued closures, hairdressers in the city have been allowed to throw open their doors and start catching up with 12 weeks’ worth of cancelled appointments.

The easing came after two days of very low case numbers, with just one new COVID-19 case recorded on Saturday and two on Sunday.

At the time fo writing, Victoria has today recorded four new cases, and one death overnight.

This brings the 14-day rolling average in metropolitan Melbourne to 7.2.

The easing of restrictions was welcomed by Melbourne hairdressers, which have been forced to remain closed since early-August.

Speaking to SmartCompany, Tom White, co-owner and salon director at Rubi Hair, says the announcement left him both ecstatic and surprised.

“I’ve been waiting for this day for so long,” he says.

White was fully prepared for the easing to be focused on social activities, rather than on businesses, he explains.

“I can’t believe he actually let us go back early,” he says.

“We were blindsided completely, to be honest.”

That said, White and his team have had a reopening plan in place for some weeks now.

“All the staff knew exactly what was going to happen, what time they would be in, how they would be managing their appointment books,” he explains.

“Everything was set up,” he adds.

While there was no ‘dark period’ for salons to prepare for reopening, White says most hairdressers across Melbourne will be ready to go.

“In all honesty, you should have already had it sorted out — you’ve had three months off to work out a plan.”

Rubi has three Melbourne salons, and today it’s all hands on deck at all three, with team members rebooking cancelled appointments, he says.

“We’re going through, starting from the day we shut … working our way systematically client by client, appointment by appointment.”

Then, the team will be working through expressions of interest that have come through during the lockdown.

The salon doesn’t usually open on Mondays, so today is about planning a prepping.

But, beyond that, it’s a chance for staff members to get their own hair done.

“As a hairdresser, it’s your privilege to get your hair done first,” he says. 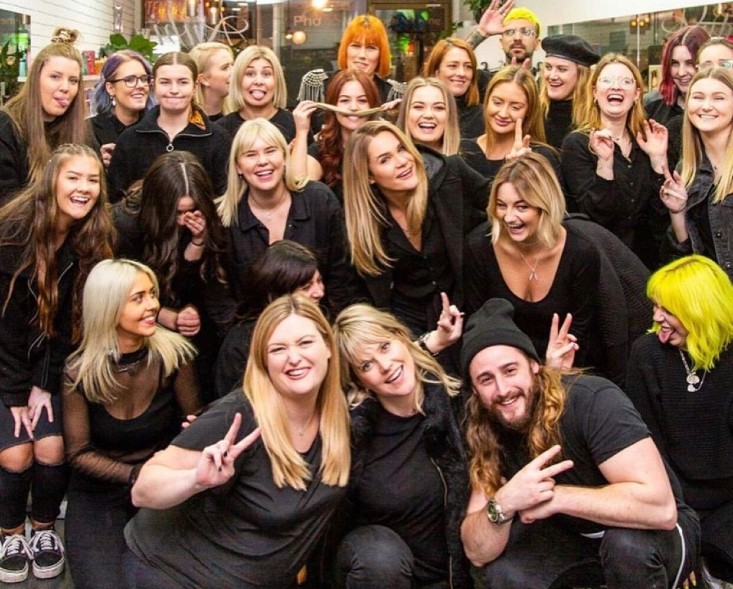 He’s also anticipating a glass of bubbly for everyone at the end of the day, just to celebrate being back.

For White, reopening means he’s able to bring some cash into the business again. But it’s also about more than that.

“More than anything, it’s the mental health side for all of our staff,” he says.

Most of the staff members aren’t from Victoria originally, and don’t necessarily have family here, he says.

“I know this is probably a cliche, but truly, we are a family,” he adds.

Elsewhere, not everyone is quite so boundlessly positive.

In a statement, Amber Manning, chief executive of hairdressing franchise JustCuts, said the reopening is “welcome news” for Melbourne salon owners, but suggested more needs to be done.

In particular, she called for rent relief from commercial landlords.

“It’s time commercial landlords also stepped up and did the right thing by providing rent concessions to businesses impacted by COVID-19,” she said.

“Only a small number of these commercial landlords have made any concessions for our family-owned salons, and even then, they are only prepared to consider deferral of rent.

“It’s simply not enough given the current landscape and so we are calling on them to step up to the plate too.

“After all, without tenants, there’s no rent being paid.”

While yesterday’s announcement brought some relief to hairdressing businesses, there was no joy for retailers and hospitality businesses, which at one stage were hoping to reopen today as well.

That milestone relied on the city reaching a 14-day average of five cases per day, or fewer. And last week, as new case numbers remained stubbornly in double-figures, it became clear that wasn’t likely to happen.

Yesterday, Andrews instead announced that retail and hospitality businesses will be able to reopen from November 1, although he also said this date could be bought forward if we see another week of low case numbers.

The November 1 date is a diversion from the Victorian government’s original reopening roadmap, which suggested bars and restaurants would be able to open for outside dining from 26 October.

In a statement, Jennifer Westacott, chief of the Business Council for Australia, called this an “inexplicable and unacceptable delay”.

Victorian small businesses and their employees are “hanging on by a day, not a week”, she says.

“Adopting a wait-and-see approach to easing restrictions is not an answer for people who face a bleak Christmas and businesses that are trying to get back up and running.

“There is no sound reason to continue the restrictions on business, especially with case numbers clearly on a downward trajectory.

“People desperately need the ability now to get on with their lives and businesses.”

Westacott urged the government to focus now on economic recovery, as well as the health crisis recovery, and on protecting livelihoods.

“Simply being allowed to go for a haircut or outside a bit more when you have no job, no money, and your business has failed, is just not good enough,” she said.

She also suggested the Victorian government has not consulted with businesses on how to reopen more quickly.

“Across the rest of the country, business is helping drive practical solutions, such as enhanced digital tracking and tracing, to keep workers and customers safe,” she said.

“Business, which is the lifeblood of the community, faces a bleak Christmas unless there is a clear, decisive and evidence-based plan that gets Victoria moving again.

NOW READ: How do we reverse Australia’s retail vacancy apocalypse? Here’s one idea