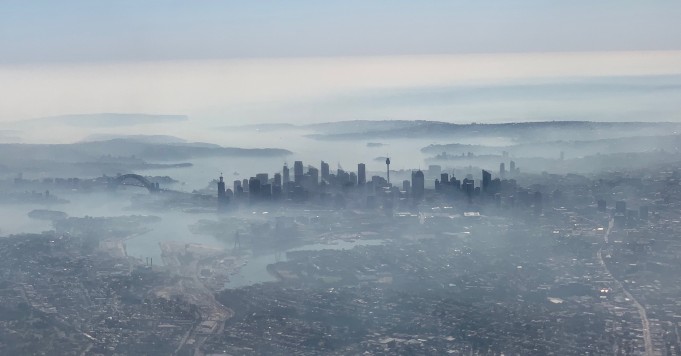 Independent businesses across Sydney are today deciding whether to keep their doors open as air pollution from the NSW bushfires blankets Australia’s largest city.

Unions NSW has urged workers to consider heading home as working outside is no longer safe, while social media has been inundated with reports of residents purchasing respirators.

Several small business owners SmartCompany spoke to on Wednesday morning said they had sent staff home and would remain closed for the day after battling with smoke haze entering their stores on Tuesday.

Others said they intended to stay open through what is typically a busy trading week heading into Christmas, despite the ongoing disruption and health warnings.

It comes as a group of former NSW fire and emergency chiefs call for a national bushfire emergency summit to discuss responses to the ongoing natural disaster and the role of the climate crisis in making extreme weather events more likely and destructive.

Oh Sydney, you absolute stunner! This is what the #ClimateEmergency looks like. #NSWfires #sydneysmoke (image @abcnews) pic.twitter.com/vpPjl5nQG0

James Bradley, owner of Liquid & Larder, a group of five restaurants and bars in Sydney’s CBD, tells SmartCompany about 30% of reservations across his businesses were cancelled yesterday.

“Most people were saying it was health-related, that they couldn’t breathe, or they weren’t feeling right,” he says.

“One of my venues was quite heavily thick with smoke,” Bradley says. “We had to turn the aircon off and purge the system.”

“A lot of other buildings were having false fire alarms,” he adds.

Bradley intends to keep his venues open in the weeks leading into Christmas, despite warnings from health authorities about working through the smoke.

He’s expecting an uplift in trading over the next few days but says he’ll be watching the situation closely, amid hopes air quality may improve.

“For my business, this week should be the busiest week of the year.”

Public transport services, including ferries, were suspended amid the worst of the air pollution in Sydney yesterday, and even the Sheffield Shield cricket game was affected by the conditions.

Health NSW has said residents should remain indoors with windows and doors shut to reduce exposure to the smoke.

If this is in part one of the consequences of climate change, it really shows the limitations of adaptation. It’s not just slowly getting warmer – which we might be able to adapt to. Some systems take an abrupt turn. https://t.co/QCQdCnze8X

Dean Salakas, owner of NSW-based retailer The Party People, says western Sydney has been blanketed by “ash raining from the sky”.

“By the time we realised how bad it was yesterday it was too late, everyone was already at work,” he tells SmartCompany.

Salakas intends to keep his doors open for the time being but says he’s monitoring weather reports closely in case conditions worsen.

NOW READ: What to do if your business is affected by bushfires

NOW READ: “Give us a call”: Fast-tracked tax refunds on offer for flood-affected businesses