‘I won’t deal with shopping centres again’: New future for Nuts About Tella after landlord dispute

Nuts About Tella has a new lease on life. Source: Supplied.

Melbourne business owner Mark Elkhouri has expansion on his mind and has just returned from a trip to Sydney, checking out possible locations for his dessert restaurant Nuts About Tella.

But less than a month ago he was dealing with a very different set of circumstances, forced to place his business into voluntary administration after dealing with a range of issues that can’t be published for legal reasons.

Having come out the other side of the process with a new vision for the business, he’s learnt a few lessons.

Elkhouri reports being abused and used by retail landlords after trying to expand his business with several pop-up locations in Melbourne, having had initial success with his store at La Trobe University in Bundoora and a food truck.

Elkhouri’s business was built within the niche of the dessert category, selling extravagantly decorated doughnuts, burgers and chocolate pizzas.

But after investing $10,000 in a pop-up in Melbourne’s CBD to bring his products to a new segment of customers, the business owner was soon told he needed to move to make way for another retailer, and was relocated to a less trafficked part of the shopping centre.

“I didn’t have the freedom, the availability to do what I wanted to do,” he says.

But Elkhouri has bounced back and is now excited about diversifying his business into a range of savoury foods through an additional new brand, burgers and desserts (B.A.D.).

Supported by a strong following on social media, Elkhouri says customers are looking for a ‘cheat meal’-style fast-food concept that embraces the good parts about being bad. 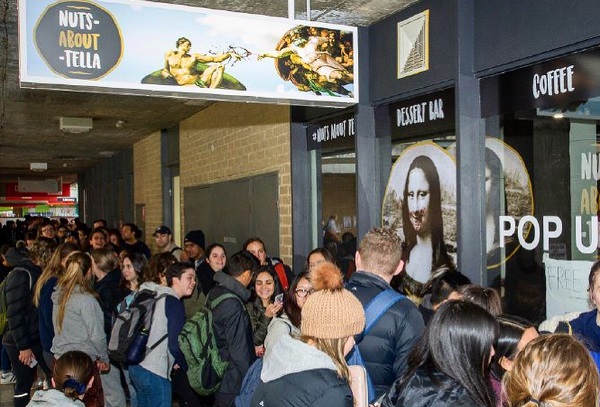 With expansion on the cards, 2019 will be a big year for Nuts About Tella, but Elkhouri believes a better framework needs to be created for retail tenants in their dealings with landlords.

“If you take over a place and the landlord expects a certain return on the property, they’ve asked for a large amount, it does strangle the tenant … [they] can’t focus on the actual business,” he says.

“You have to play around with your costs … [which] brings down your quality.”

Disputes between landlords and tenants are nothing new in the world of hospitality or retail, but the relationship has come under increased scrutiny amid difficulty in consumer-facing sectors in recent years.

Disputes arising from disclosure problems and landlords chasing money from tenants increased in 2017-18, according to Victorian Small Business Commission data.

More than a quarter (27%) of retail lease disputes arose from tenants who didn’t pay their bills, a 7% increase on the previous year.

Earlier this week, the Australian Retailers Association (ARA) secured a deal with the Shopping Centre Council of Australia (SCCA) to establish a code of conduct governing some behaviour between retailers and landlords in NSW.

The agreement compels landlords to provide additional information about benchmarked occupancy costs to tenants in exchange for sales data, described as a win for the balance of power between parties.

“It’s the transparency of being able to see the information shopping centres are able to give that can assist in running a business,” ARA executive director Russell Zimmerman tells SmartCompany.

It took over two years to get the code over the line, with assistance from the NSW state government proving pivotal to getting the deal passed in the end.

Now momentum is building for the code to be expanded to other states, including Victoria.

“It could happen now”

“It will encourage open communication between landlords and tenants and should provide better analytic data.”

O’Connell says she’d like to see a similar code in Victoria and wants the state government to work with the industry to get something done.

“Under our retail lease act, if all parties agree, it could happen now.”

Zimmerman says now is the time to “get proactive” about taking the code to other states, flagging discussions with the Victorian state government.

“There’s very little reason it can’t be rolled out. Let’s all be good corporate citizens about this,” he says.

The SCCA, which will need to agree to any further deals, did not respond to a request for comment.

NOW READ: “Nobody can do it”: Small retailers say they can’t make high Sydney rents work, as landlords show no mercy